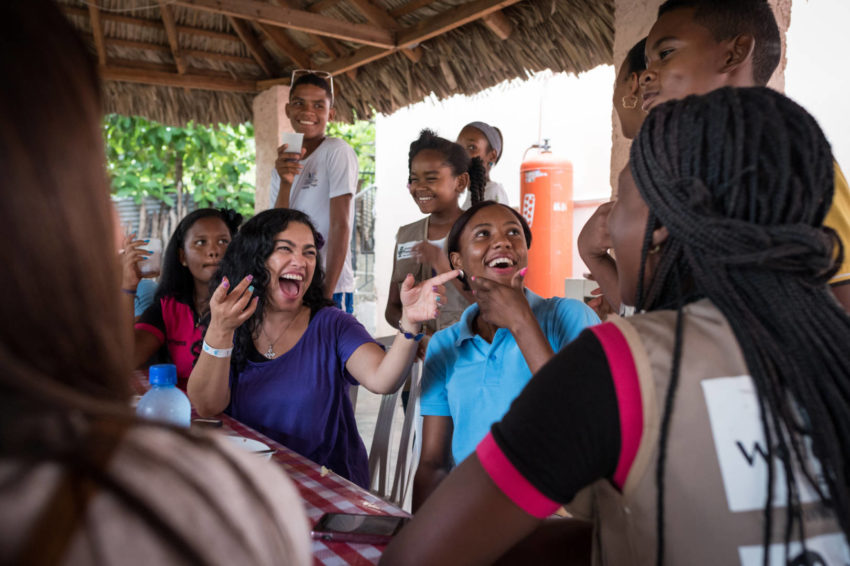 Are you the protagonist in your own life story … with God as the author?

Join blogger Elayna Fernandez — The Positive Mom — as she meets youth in the Dominican Republic who are becoming leaders in God’s story and inspiring others to embrace their own identity.

Many times we refer to God as the author of life. I certainly hold this as truth, and this belief has both created conflict within myself and given me inspiration. I can illustrate this with two of my most recurring thoughts:

If God is the author, why is there so much tragedy in my story?

If God is the author, there must be a happy ending to my story.

I was reflecting on this when I visited a radio show in which I was interviewed by amazing kids, tweens, and teens who call themselves “Jovenes Protagonistas Cambiando El Mundo” (young protagonists changing the world). It was almost surreal to be among these eloquent, confident, and driven kids and almost hard to believe their confession of being shy, socially anxious, and insecure before they enrolled in a World Vision-sponsored leadership class.

In the midst of my awe, the word “protagonist” kept playing in my head. What does it mean to be a protagonist?

We certainly live in a world where everyone feels like the main character of their own story. We appear in each and every scene and describe the supporting characters as they relate to our own experience. Sometimes, getting caught up in this narrative can lead to self-importance, but in others, it can result in a happy ending.

What makes the difference?

Well, being a main character is not a synonym of being a protagonist.

When I look at my life story and look at the different roles I’ve led, I’ve certainly been the main character, but I can clearly see that I’ve played the victim, the hero, the sidekick, the villain, and pretty much every character you can think of. I’ve concluded that being the protagonist has much to do with our relationship with the author.

When I’ve questioned the author about the tragedy in my story — and there has been plenty — my outcomes have been less than desirable. When I’ve trusted that the author has developed a beautifully orchestrated plot and that somehow I’ll come out triumphant because he sees me as the protagonist, it’s definitely resulted in joy for me and inspiration for others.

I could tell that these kids in Jimani, a remote town in the Dominican Republic, had a strong relationship with their author. They didn’t just call themselves protagonists; they played the part. The part becomes obvious through what the character says, thinks, or does.

Take a look at your own life story:

Do you trust the author?

Do you look the part you want to play?

Do your speech, actions, and thoughts make you the protagonist of your life?

What you say, think, and do directly affects the conflict and the resolution of each chapter in your life story. And as a word nerd, I couldn’t help but notice that being the protagonist of my life can be as simple as punctuation.

These young protagonists weren’t using question marks; they were using periods. They know that their setting does not define them; their character qualities do. The setting is just a setting, and the character is revealed by her perspective and how she or he reacts to the conflict that arises.

These young kids know that being a protagonist is not about thinking you are the main character and the only person that matters. The protagonist wants to change the way the story goes, because although she or he is not the author, she or he knows the author’s nature and has received spiritual insight on how he’d want the story to go.

I bought a small Cinderella play-set to display in my home office (yeah, I’m borderline obsessed), and Little Pige often asks to play with it. I remember one morning trying to get her 2-year-old-girl mind wrapped in the concept that the two figurines were both Cinderella: One is dressed in rags, holding a broom, with a troubled expression, and the other is dressed in a sparkly gown with an expression of joy and fulfillment.

Sometimes it’s easy to get lost in the minor roles of our life and forget the potential we are each given. So, how does one stay grounded in the possibility of a happy ending even with the drama and antagonists within the script?

The “Jovenes Protagonistas Cambiando El Mundo” (young protagonists changing the world) are kids who live with that assurance. Once timid and afraid, they now feel free to dream, be outspoken, and be courageous. They’ve been instructed, mentored, and nurtured to see past their setting and to define themselves by the gifts the author has used to define them.

“World Vision is our home.”

“World Vision is our refuge.”

“World Vision is a place where we are allowed to dream.”

“World Vision has taught me I have a voice.”

“World Vision protects me and other kids in my community.”

“World Vision gives us the opportunity to express ourselves.”

“World Vision has taught me to give back”.

They were taking turns, expressing what World Vision meant to them. Their hands went way up, and they were so eager to share that they seemed impatient. Tears rolling down people’s cheeks evidenced that their words provided healing and hope.

I wished I could play this scene on a giant screen to every person who asks, “Why sponsor a child?” Because this is what child sponsorship is all about. Many may think of it as a handout to a poor child. What an oxymoron! Children are never poor — they are more in tune with their mental faculties than any adult could ever be. Unfortunately, many children do lack encouragement, support, and the ability to meet their basic needs.

By sponsoring a child, you play the part of fairy godmother to a protagonist that always had the possibility of having a happy ending. Not that I think you have a magic wand or anything, but you have something they don’t, and you can use it to bless them.

I have always known that sponsoring a child through a monetary pledge helps the child and their family and inevitably impacts their future in a positive way. Yet in this room filled with smiles and tears, I discovered that your help as a sponsor, mentor, and friend gives your sponsored child the opportunity to see who they can become in their life story. The name World Vision took on a deeper meaning because it really changes a child’s vision of the world they live in. The wave of the wand may seem like an event, but it is an element of transformation.

“And be not conformed to this world: but be ye transformed by the renewing of your mind, that ye may prove what is that good, and acceptable, and perfect, will of God.” –Romans 12:21

I was so uplifted by these young ones that I did not want the moment to end. And it won’t. It will live forever in my life because it’s now part of my story. I encourage you to support World Vision’s efforts to help children feel loved, protected, and confident to speak up in their communities, so moments like these can be a part of your story too.

Being the protagonist in your own life story means you use the gifts you were born with to take you into the leading role you were born to play, to treat everyone like a main character and not mere supporting cast, and to inspire others to embrace their own identity. Search below for a child to inspire not to conform, but transform into who he or she was created to be.

Originally published at The Positive Mom.

Meet our other Dominican Republic bloggers, and see what they wrote about the trip!

Melissa Bailey: “8 stories that fed my soul in the Dominican Republic”

Benjamin L. Corey: “You can’t be Christian if you’re not caring for the poor”