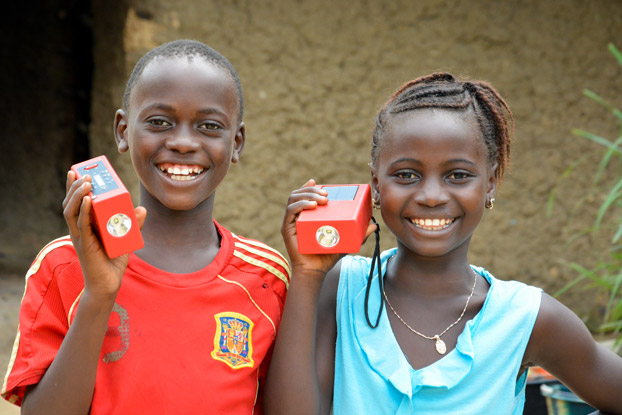 Omaru and his sister, Francess, listened to school classes on solar-powered radios during the 9-month Ebola outbreak. (©2015 World Vision/photo by Sahr Kemoh Ngaujah)

Children in Sierra Leone spent nine months out of school during the Ebola outbreak. When they returned, they did so with fear of the disease and coping with the loss of loved ones. Still, it was a day of hope and celebration.

See how World Vision continues to support the long-term recovery of children in Sierra Leone after Ebola, and experience their bittersweet return to school through their eyes.

Eleven-year-old Millicent describes April 14, 2015 as “the best day of my life.”

That’s the day that schools officially reopened in Sierra Leone after a nine-month closure to help contain the spread of Ebola. The deadly virus claimed 3,955 lives across Sierra Leone, including 945 children. But last April, school bells rang again and children’s laughter could be heard on playgrounds across the country.

Millicent, a World Vision sponsored child, recalls her excitement upon learning that classes were about to resume. “Mr. Momoh, a teacher at my school, went around informing pupils and parents that schools would reopen in two weeks. When he entered our house and told us, I can’t describe how I felt,” says Millicent, a fifth-grade student at a Roman Catholic primary school. “That was the best news I have ever heard. When school finally reopened on April 14, it was the best day of my life.”

Millicent and her classmates returned to class just in time for mango season. Ripe mangoes hung from trees on the roadsides and in the school compound. And inside the classroom it was lively. Pupils sang the national anthem and the school’s song enthusiastically. Color returned, too — bright green and brown uniforms were everywhere. Teachers were occupied again with settling class disputes and maintaining order.

Being out of school for nine months was difficult for most of the country’s 1.7 million students, including Millicent and her best friend, Isatu.

“Millicent and I were always working on our parents’ farms when school was out, since we had nothing to do at home,’’ says Isatu. ‘’I almost forgot everything I had learned. When school reopened, I found it a bit difficult to adjust.”

Millicent worried not only about lost lessons, but also about the state of her abandoned school. ‘’One Monday morning, I was accompanying my mother to our farm, and we walked past our school. I saw goats and sheep in the corridors! The school was covered with overgrown bushes and grass. I asked myself, ‘Are we never going back to school?’’’

The goats are gone now, but getting back to normal may take longer.

‘’I was very happy to be back at school the first day, but inside I was also scared of Ebola,” recalls Millicent. “My parents warned me not to get very close to my friends and other students.”

In and out of the classroom, all body contact was strictly avoided, even handshaking. Boys couldn’t play soccer, and girls no longer enjoyed their favorite game of touch tag, all in a bid to prevent the spread of the virus.

Isatu had to adjust to new practices in the classroom. ‘’A lot of changes have taken place in my school,” she says. “Before Ebola, we used to sit three to a desk, but now we sit in twos so we don’t touch. Handwashing was never practiced the way it is now, and we are checked with a thermometer daily.”

Every one of the school’s 274 pupils returned to school. According to teacher Jeremiah Abu Bayoh, the school’s new hygiene routine may be one positive outcome of Ebola. ‘’This handwashing is a good habit that mustn’t stop,” he says. “When children grow up doing this, it becomes a habit they will not depart from.”

The Ebola epidemic hit schoolchildren and teachers heavily. More than 8,600 children lost one or both parents to the virus. Children are grieving lost loved ones while living with the fear of contracting the disease, and of death.

“Re-opening schools is not just a one-off event. It’s going to be a months-long journey,” says Alison Schafer, World Vision’s mental health and psychosocial support specialist. “We need to create a supportive learning environment where children feel safe to express their emotions about what they have endured.”

Equipping teachers with psychosocial first aid skills is key to helping students get back to their books, says Schafer. She co-wrote a training manual being used nationally to help teachers recognize and deal with signs of stress in children, including poor focus, irritability, and hyperactivity. World Vision has trained more than 1,000 teachers in Ebola prevention, safety guidelines, and psychosocial support skills.

“I could sense the children’s shock at being back in a routine. They couldn’t concentrate when schools first reopened,’’ says Millicent’s teacher Joseph Nallo, who participated in a three-day World Vision training course for teachers. “Children who used to be very open and free seemed scared. Now they are coming to terms with the reality that Ebola is still around, but if we do what is right, we can contain it.’’

The World Health Organization officially declared the Ebola outbreak over in January 2016, though a few cases — including one in Sierra Leone — have been reported since.

World Vision is working to ensure that children continue to have a safe transition back to class by providing schools with 16,780 hygiene kits, as well as Ebola prevention information. Throughout the crisis, World Vision provided assistance to 1.6 million people, and not a single one of World Vision’s 58,000 sponsored children in Sierra Leone contracted the disease.

Glad to be back at school, Millicent is now focused on her future. “I want to be a lawyer,” she says confidently.