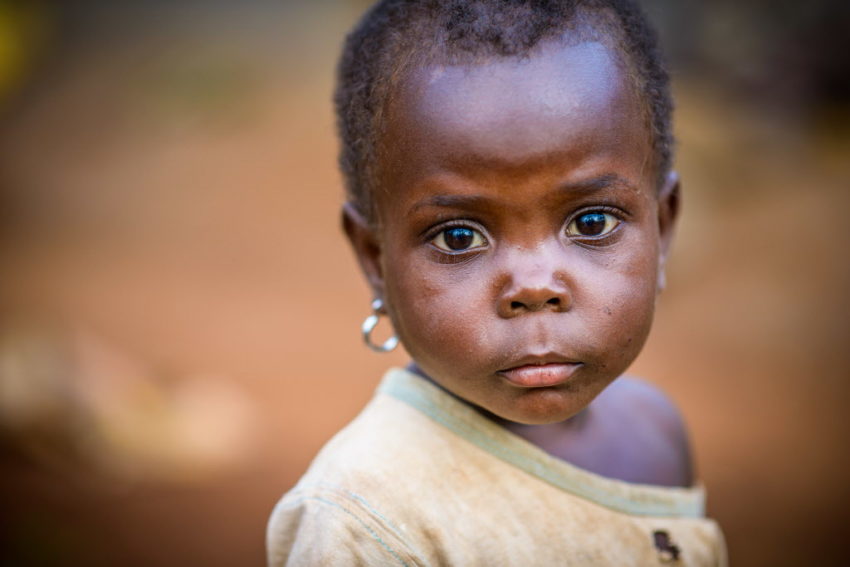 Sharon wears an earring: a blemish to protect her from child sacrifice. Her brother Moses was sacrificed two years ago. (©2014 World Vision/photo by Jon Warren)

Two years ago we reported the story, “Protection through pierced ears in Uganda,” about one of our most innovative programs — an Amber Alert designed to save children from being sacrificed in Uganda.

Project manager Obed Byamugisha risks his life every day in a battle against witch doctors. Last month we got an update on the project and his personal life. See how communities in Uganda are working together to keep their children safe.

I take Obed Byamugisha to a Panera in San Diego for his first breakfast sandwich. He’s made a trip to the United States to speak with World Vision donors about the incredible work of the Amber Alert project in Uganda. He sips tea while we talk.

“The year you came, we lost nine children,” he says. Nine children — lost to child sacrifice.

And this year? None, so far, he says. The program is working.

The Amber Alert saved Sharon. The 3-year-old was home with her brother David, 9, while their mother, a single mom, worked in the garden.

“They were attacked at home,” says Obed. The attacker tried to abduct both children, but David was able to escape. He ran to the nearest home for help but could only find children. He ran to another home. And another. At that third home, he met a farmer named Chiwa and poured out the news: Sharon had been taken.

Everything happened quickly. Motorcyclists sealed off roads from the village. A description of Sharon was sent by text message and broadcast over the megaphones. The community searched.

A few hours later, Sharon was found. The kidnappers had hidden her in a thicket. She had been chloroformed. “They thought she was dead,” says Obed.

But Sharon was alive. Community members took her to the clinic where she was revived and reunited with her very grateful mother. “Everyone did their part,” says Obed. “The baby is fine.”

I asked about two families we’d met before in the child sacrifice hubs of Uganda: Mukono and Buikwe Districts. Their boys, 15-year-old Moses and 10-year-old Kato, had been sacrificed.

Moses’ mother, Rehema, was devastated. His father was suicidal.

“They had to relocate,” says Obed. “When we started to work on their case, it was not safe for them to stay.”

Obed visits the family once a month. “They are struggling,” he says. “But they are able to feed the family.”

And Kato? He was his family’s star athlete. He loved running behind a bicycle wheel, outracing his friends.

“You will still find his wheel in the home,” says Obed. It leans up against the wall. “They never want to forget him.”

But Obed’s work is changing the narrative of the communities where child sacrifice is practiced.

“So many things have happened,” he says.

First, he’s put the church at the forefront of the activities. “The church is rebuilding families,” he says.

The government is involved. “A member of parliament came to the community to visit and see [the Amber Alert] for himself,” he says.

As a result of that visit, the Ugandan parliament is passing a law to regulate witch doctors and oversee their actions. The government will begin providing protection for survivors to make it possible for them to testify against witch doctors without fear.

Other communities are replicating the work that Obed has done in Mukono and Buikwe Districts. “Now parents are on board,” he says.

Fear in the communities has lessened, and children feel safe again. “Enrollment in school has gone up,” says Obed. “Children who didn’t used to be in school are now in school.”

Although Obed’s work is not yet done, he is seeing vast improvements through the Amber Alert.

And now he has a partner — Heita — a woman he had been dating for years.

The courtship had been rocky.

“She thought she was going to lose me,” says Obed.

Heita met him at a restaurant one evening in 2013. She had a newspaper opened to an article about Obed’s work in child sacrifice.

“You are doing this? You are going to die,” she told him, pointing to the story. “You must leave this work.”

But Obed could not. Children were dying.

“I thank God I didn’t marry her then,” he says. “She had not accepted for me to do what I do.”

The more Heita learned about Obed’s work, the more she became invested in the cause.

“She has come to love what I do,” says Obed. “Now she is the one who advises me on the issues of policy.”

The two married this past January.

Today, they only disagree on one thing: children.

We finish up our breakfast at Panera. Obed has decided to try to cook a breakfast sandwich for Heita when he gets back to Uganda. He thinks she will love it.

Through every action, even the smallest, this courageous man is making the world a better place.

“This project touches the heart of God,” says Obed.

I know that Obed touches God’s heart as well.

Child sponsorship is one of the most powerful ways to help protect vulnerable children and keep them safe from threats like violence and exploitation. By helping communities and families work together to meet children’s needs, we can make a significant contribution toward preventing child slavery, trafficking … and child sacrifice. Choose a child to sponsor in Uganda today.