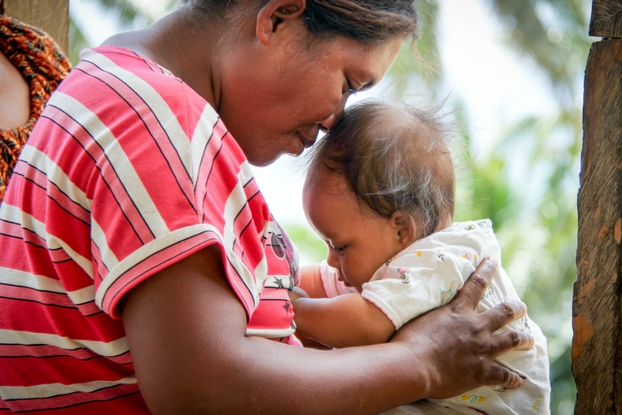 A woman holds an infant in a village in Indonesia. (©2014 World Vision/photo by Bartolomeus Marsudiharjo)

What happens when a mother dies? In poorer parts of the world — like the highlands of Papua, Indonesia — a mother’s death can be especially devastating to her family’s livelihood and survival.

“On my way back home from the hospital, I just kept thinking … How am I going to tell my children, their mother and baby brother died?” Ekari’s husband lamented. “I do not understand why.”

During 2015 alone, more than 275,000 pregnant women died while giving birth, which is 760 mothers-to-be every single day. One of those deaths occurred in the city of Jayawijaya, located deep in the highlands of Papua, Indonesia, home to the Dani tribe.

Ekari was a young woman, a mother of two precious little girls, anxiously expecting her third and last child. She was hoping for a boy. One early and hot morning, she woke up to the pains of delivery. While her husband ran outside and called the local midwife, Ekari got her two little girls ready for school. She dreamed of a better life for her girls through education.

When the midwife came, an hour later, her pains had increase in magnitude and frequency, promising a rapid and normal delivery. As the sun came down 12 hours later, she found herself exhausted and without her baby. The midwife told Ekari’s husband to take her to the hospital, as something was wrong with the delivery process. Immediately, he arranged and paid for transport, and they traveled to the hospital.

But like many health institutions in poor regions, the hospital was understaffed and lacked drugs, an adequate blood bank, and the equipment needed to provide care for obstetric emergencies. An unjust 99% of maternal deaths occur in poor countries. Because Ekari could not access adequate care, her uterus ruptured and she bled to death. Her baby did not survive.

But what happens when a mother dies? Grief, sorrow, loss, anger, fear? In our western culture, probably all of the above. But in poor countries, there are also social and economic consequences, both for her immediate family and for the community as a whole. Recent research conducted by several academic institutions — such as Harvard’s FXB Center for Health and Human Rights — have found that a mother’s loss can devastate the livelihoods, quality of life, and the survival chances of those she leaves behind.

When a mother dies, negative financial, educational, and survival consequences are interlinked and intergenerational. And in a world with rapacious wealth inequity, we can expect many more stories like Ekari’s.

The truth is that Ekari and her baby died because they were poor.

At World Vision, it breaks our hearts to see women lose their lives in childbirth. We have programs all over the world battling this inequality: from health system strengthening, which ensures health workers have the knowledge and supplies they need, to timed and targeted counseling, which empowers mothers to take care of themselves and their babies during pregnancy and infancy.

In Indonesia, when I met Ekari’s husband, I was visiting Traction, a project funded by USAID, where World Vision works with University Research Co. Traction is focused on helping to reinforce the health system in Ekari’s community and others by training health staff on emergency obstetric care so they can save mothers and babies from dying needlessly in the future.

The theme for International Women’s Day today is to “Be Bold for Change” — we want to change the reality for poor mothers. That’s why in 2015 we equipped more than 220,000 community health workers, those on the frontlines. And we’re working with governments to improve their healthcare systems. We also help mothers and fathers learn how to best care for themselves and their children.

And we’re partnering to do this with bold people like you who call for change.