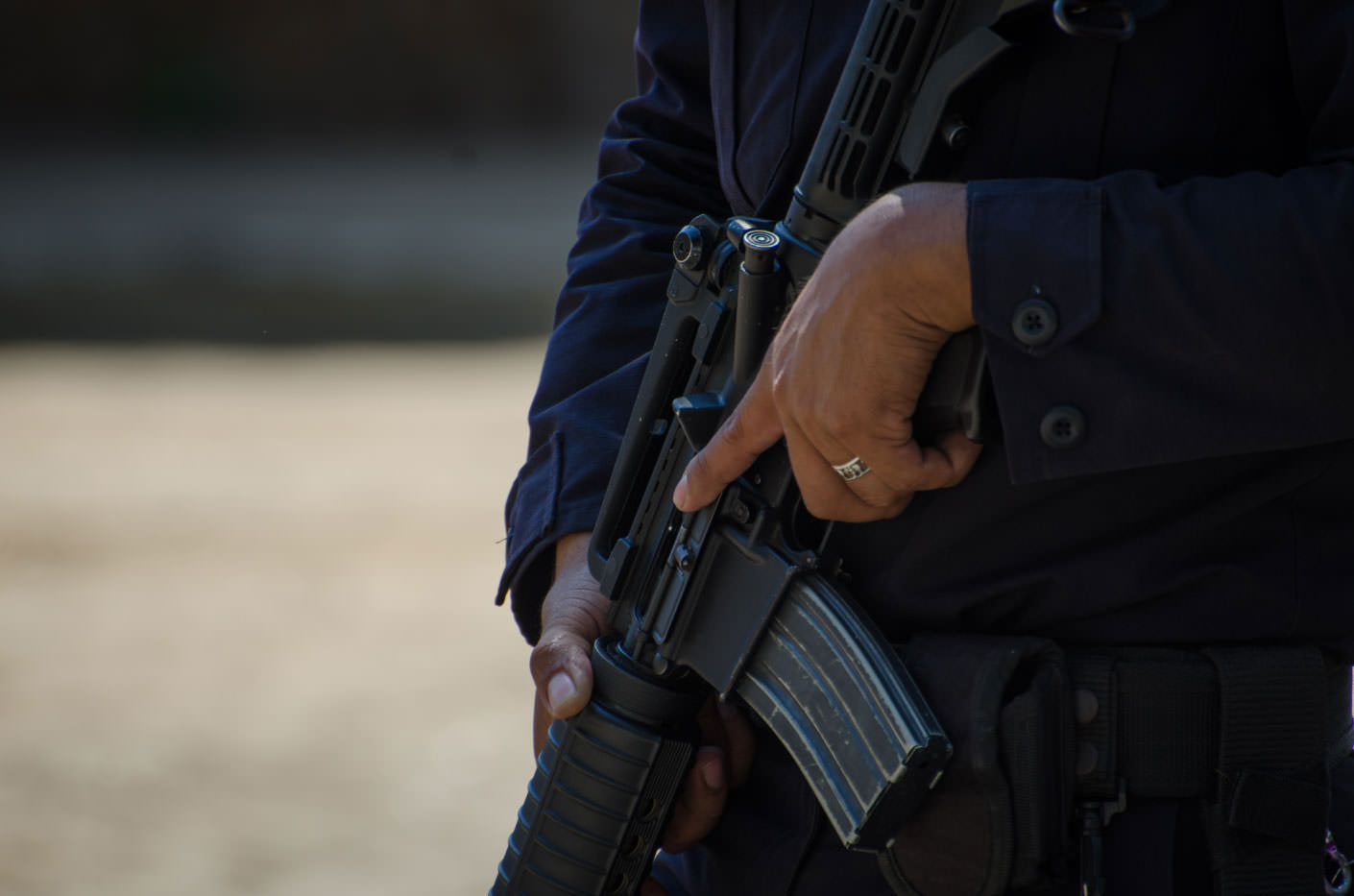 Story and Photos by Heidi Isaza

Gang warfare and high murder rates make El Salvador a perilous place to live. World Vision’s community development and child sponsorship programs not only provide a way out of poverty; they also promote youth-focused community programs that keep kids from being drawn into the red-hot cycle of violence. 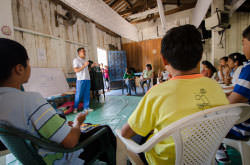 Watch a video of how Daniel helps children resist the lure of gangs.

The sun shines bright on a small cinderblock house in a seemingly sleepy town outside of San Miguel, eastern El Salvador. Its inviting rays warm the air and illuminate the atmosphere.

But Maria Esperanza*, 27, and her 3-year-old twins, Carlos Antonio and Estrella Elizabeth, stay inside their small, dark home. A second wall blocks the sun’s rays from entering the only window and hides the building and its inhabitants from the nearby street.

A year has passed since a case of mistaken identity shattered Maria and her family. Two gang members unsuccessfully attempted to kill her husband, Marcos, because they thought they saw him talking to the police. The gang then demanded $3,000, threatening to kill Marcos if he failed to pay. Unable to meet their demands, Marcos fled to the U.S., where he remains detained for attempting to illegally enter the country. 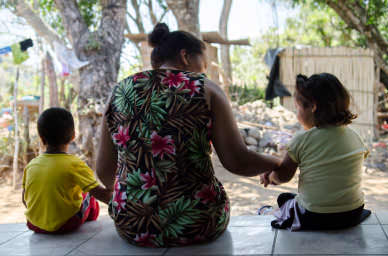 Life is difficult for Maria, without her husband to help her care for their children — especially when fear forces her to stay inside most of the time.

Life went from difficult to desperate for Maria and her children. Previously, Marcos earned $4 a day delivering bread. “We were poor, but we lived in peace,” Maria says longingly.

Now she can’t work, fearing the gang will take revenge on her or her children. “I don’t have money to provide for my kids,” she says.

One of the most terrifying aspects of Maria’s story is that it is not unique. The effects of the region-wide gang epidemic is spreading through El Salvador and neighboring Guatemala and Honduras like an out-of-control wildfire, consuming or destroying anything and anyone in its path.

The terror has spilled over from major cities into small towns like Maria’s. Day after day, most of the 14,000 residents live in fear of being robbed, held at gunpoint, threatened, extorted, or kidnapped. Even at home, families become targets as gang members telephone or leave notes in attempts to extort money.

“It affects everyone,” says Marla Gonzales, World Vision’s advocacy manager in El Salvador. “There are areas where you basically can’t go. The levels of violence are so high that if you go in, you might not know how to get out.”

The effects of gang crime permeate El Salvadorian society, leaving financial, physical, psychological, and emotional scars — impacting children and youth the most. “Our natural processes of development are being affected,” Marla says, “not just the development of a person, but the development of the whole country.”

El Salvador, the smallest and most densely populated country in Central America, has a violent past and a violent present. In the 1980s and early 1990s a brutal civil war divided the country, causing destruction, killings, and mass migration. The British Broadcasting Corporation reports that nearly a million people fled as a result of the war. 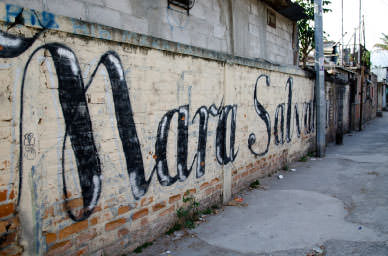 The Mara Salvatrucha, or M.S. for short, is one of the main actors in the violence that plagues El Salvador. They mark their territory with tags so it is easy to identify who is in control of a given neighborhood.

Many of the men who escaped El Salvador found their way to Los Angeles where they became easy prey for the well-established gangs that ruled the city’s streets.

To protect themselves from L.A.’s notorious gangs, the El Salvadorian immigrants formed the now infamous Mara Salvatrucha (also known as the Mara or M.S. 13). But the fledgling gang’s focus quickly shifted from defensive to offensive operations. Today, the Mara is one of the biggest, most violent, and best-organized criminal groups in the world.

In the mid-1990s, gang leaders detained in the U.S. were deported back to their countries of origin. Many gang members followed. El Salvadorians returned to a country recovering from civil war: anger was everywhere, opportunities were few, social services were scarce, corruption was rampant, and law enforcement was almost nonexistent.

When the flames of gang violence reached El Salvador, they found a generation of young people who were more than willing to fuel the fire — kids who were essentially abandoned during and after the war when their parents immigrated or worked long hours to survive.

“In the end, it is an identity problem,” says Marla. “[The kids] don’t know who their family is. They don’t know their identity in Christ. For these boys and girls, these groups, the gangs ... are giving them the answer.”

Jonathan Caleb, 16, is among those who once thought gangs were the answer for his life. The tall, slender youth grew up angry. His dad, an agricultural worker, would spend long periods away, trying to make ends meet for his wife and three children. His family was the target of ridicule.

The pain of poverty and being an outcast filled Jonathan’s mind with thoughts of violence and revenge. “I wanted power. My goal was to be a member of the Mara,” he says matter-of-factly.

Jonathan admired their tattoos. “They were a thing to be feared,” he says. “When people see them, they demand respect.” He attempted to tattoo himself, writing the letters M.S. with a sewing needle and pen ink on his upper thigh. Thankfully, the homemade tattoo didn’t leave a scar.

Faith-based organizations also are working to promote peace in El Salvador. Recently the Catholic Church initiated negotiations for a cease-fire among El Salvador gangs. Meanwhile, World Vision is providing youth with alternatives to gang activities by addressing poverty and identity issues. Culture of Peace, a new World Vision curriculum, empowers young people to express themselves and solve their problems with words instead of weapons. 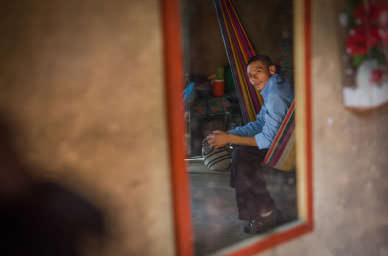 “I am sorry for the crazy things I did,” says Jonathan, once an aspiring gang member.

Culture of Peace also challenges young people to dream about their future and make plans to achieve those dreams. The lessons are based on biblical concepts and speak to children’s true identity — that in Christ they are loved, protected, and made new, no matter what their daily life is like. World Vision also provides teens with vocational skills to earn income instead of taking the gangs’ easy way out of poverty.

Jonathan’s mom, Rosario, enrolled all three of her children in youth clubs teaching the curriculum. Jonathan wanted to quit when his friends dropped out, but Rosario stood firm.

Today, Jonathan is glad. “Before, I only thought about violence to solve my problems,” he remembers. “[In the club], they taught me that violence doesn’t solve anything.

“If it were not for the Culture of Peace program, I can only imagine what my life would be like” he says. “Who knows how many people I would have killed?”

Culture of Peace helped Jonathan let go of his anger, walk away from his gang aspirations, and come closer to the Lord. “Now, every day before I go to bed, I talk with God,” he says. “This was something I learned from the World Vision workshops.”

Rosario saw the biblical teaching take root in Jonathan. “One day he came and he hugged me,” she remembers with tears in her eyes. “He told me, ‘I’ve learned a lot, and I want to ask for forgiveness.’ He has changed a lot.”

And, as one of the leaders of the youth club, Jonathan found what he was searching for. “I am really happy, because I have power. Without even looking for it, I have it, and I didn’t have to use the violence to get it,” he says.

But this Daniel is a far cry from the person he was just a few years ago. Although his childhood was relatively happy, he started down the wrong path with his friends. When he was 13, older kids on his soccer team offered him alcohol and drugs. “I let myself be influenced by them,” he remembers.

Daniel’s newfound friends joined gangs, and even through Daniel didn’t, his association with them put his life in danger. On two occasions, gang members threatened to kill him. 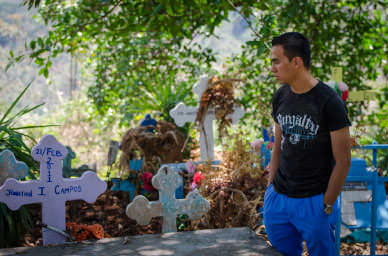 Daniel visits the grave of his friend who was killed recently; most community members believe his death is due to gangs.

“It’s an ugly feeling,” he says. “[Knowing] that someone wants to kill you… because several of my friends have been killed by the gangs.” Others have been shot or are in jail. “They are disappearing,” he says of his former friends and classmates.

Recently, a friend of Daniel’s left the community to study in a nearby school known for gang activity. The 18-year-old boy was killed, and while his death is still under investigation, most community members assume gangs played a role. “It hurt a lot, because he was our friend. He got along with everyone,” says Daniel, tearing up as he visits his friend’s grave.

Daniel, a former sponsored child, was invited to a leadership workshop organized by World Vision. “They talked about life goals, always accompanied by biblical values, and this started changing my way of thinking,” he says.

He stopped drinking, doing drugs, and hanging out with the wrong people. He started going to church, reading the Bible, and realizing the importance of focusing on his identity in Christ. “Having God present gives meaning to other things,” he says.

Once Daniel turned his life around, he focused his attention on helping other teens in his community to do the same. With World Vision’s support he started a youth club to provide kids with a positive alternative. “There isn’t anything to do, so you go to the streets,” he says.

During Saturday club meetings, Daniel guides more than 20 teens between ages 13 and 20 through discussions, activities, and games about developing goals, avoiding temptation, and rooting their lives in the Word of God. “I want to help other youth,” he says. “I have changed, and they can change too.”

He hasn’t given up hope that his former friends can change as well. “They still don’t want to come [to the club]. But I am going to convince them to come,” he says with a determined smile.

To fight violent gangs, El Salvador’s government has tried direct attacks and repressive measures. Several thousand gang members are in El Salvador’s jails, about a third of the prison population. According to El Salvador’s major newspaper, the result has been prisons that are at 300 percent capacity and gangs that are even more organized.

Just as in fighting wildfires, the work has to focus on preventing flames from raging out of control. World Vision is addressing the issue of the “fuel” by empowering teens to reach out to their peers through youth-led clubs — providing young people with a viable alternative to joining gangs.

By keeping kids like Jonathan and Daniel out of the gangs and equipping them to encourage and inform their peers, 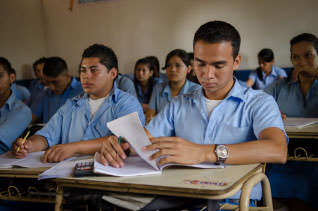 World Vision is helping to protect children and change society for innocent families like Maria’s.

“[El Salvador] would be a different country, and that is what we are dreaming about,” says Marla. “A country where we can resolve our problems without conflict … where we can have peace … and where the children can live safe and healthy. The worst thing we can do is lose hope.”