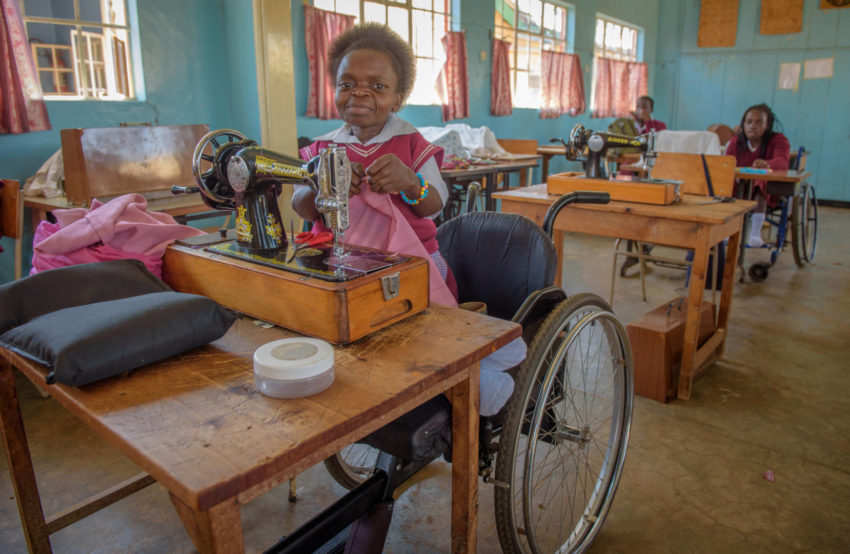 Judith learns sewing as a part of her education at Nyabondo Rehabilitation Center. She hopes to get her own sewing machine once she finishes her studies. (©2019 World Vision/photo by Laura Reinhardt)

World Vision has partnered with Nyabondo Rehabilitation Center in Katito, Kenya, for more than 10 years. The center offers vocational training to teens and adults with disabilities. That training equips students with skills that will enable them to earn a living.

Through ACCESS, a USAID-funded program that stands for Accelerating Core Competencies for Effective Wheelchair Service and Support, World Vision also provided fitted wheelchairs for some of the youths who attend the center.

But the ACCESS program didn’t stop with wheelchairs. World Vision staff and peer group trainers lobbied for the inclusion of people with disabilities. They wanted to change the mindset of the community.

At Nyabondo Rehabilitation Center, three youths shared a part of their journey about how the gift of a wheelchair and inclusion changed their lives.

Judith: ‘I can do things that I was not able to do before’

Judith Ajwang, 16, was brought to the center by her aunt. Her parents died when she was young; she has no memory of them. “My auntie didn’t love me, and she didn’t welcome me,” says Judith. But her aunt did bring her to the center.

Before, Judith had to crawl if she wanted to move anywhere. “I was not able to go anywhere. I was just there,” she says.

She admired other children when they went by on their way to school, but school wasn’t an option for her.

Things began to change when she arrived at the center six years ago and received sewing training. She began to be treated differently. “[The center] welcomed me very well, and I felt like I’d gotten my parents again,” Judith says.

Then two years ago, she received a wheelchair through the ACCESS program. “That day, I was very happy when I received the wheelchair because I was now able to move very freely,” Judith says.

She also received training on how to take care of her wheelchair and how to clean it. If something breaks, then she gets help repairing it.

“Before I got the wheelchair and I was just at home, I was seeing no future,” Judith says. “I was just there, and there was nothing.”

Now, when she finishes her studies, she’ll get a sewing machine so she can work to support herself.

“Right now, I can do things that I was not able to do before, so my life has transformed,” Judith says. “I think that my future will be bright.”

Fidel: ‘The wheelchair has changed my life’

Fidel Otieno’s grandmother brought him to the center in 2015. She saw the type of teaching being offered there, and it impressed her. Before that, he’d lived most of his life with his grandmother. During the school holidays, Fidel, now 16, returns home to spend time with her.

Before, he used to feel ostracized in his community. “My life before, my friends used to laugh at me because I was unable to walk,” he says. “Before, I used to close myself into the house and watch TV or crying in the house.”

He did get a wheelchair in 2012, before he came to the center, but explains that the front tires on that wheelchair were small, so he used to fall often.

When he came to the center, he got a brand-new wheelchair. “This one is very much steady,” Fidel says. “When I move around in it, I do not fall.”

Now, with this wheelchair, friends seek him out. When he’s at his grandmother’s home, they come to pick him up. He has the freedom and mobility to spend the night at their homes if he chooses.

“The wheelchair has changed my life. I can do things on my own now. I can run very fast with the wheelchair,” Fidel says. In fact, he’d like to someday do a marathon.

Benedict: ‘I no longer feel the pain in my knees’

Benedict Otieno (no relation to Fidel above), 20, was born with cerebral palsy. He lost both his parents in 2003 and was being raised by his grandmother, but she couldn’t provide for his needs. She had no way to get him the wheelchair he needed.

“I used to crawl using my knees,” he says. “I was feeling so much pain in my knees because of the crawling. I was feeling pathetic.”

He came to the school three years ago. At the school, he received a World Vision-distributed wheelchair through the ACCESS program. He says, “[The] wheelchair has given me freedom to work and to interact with other people and the freedom to see what’s going on in the wider world.”

Before he had the wheelchair, people in his home village used to laugh at him. Some people even saw Benedict as a curse and wouldn’t come near him. “Right now, the story has changed,” he says. “The laughter is no longer there.”

Now, he’s learning how to sew and knit sweaters. He knows his future is completely different from what he ever could’ve imagined.

“Right now, I feel a change in my life,” Benedict says. “I no longer feel the pain in my knees. I feel totally different from having this wheelchair.”

As children and youth with special needs receive the tools they need to thrive, they, in turn, can impact the lives of their peers and communities, creating a brighter world.

ACCESS was made possible by the generous support of the American people through the United States Agency for International Development (USAID). The contents of this article are the responsibility of World Vision, Inc. and do not necessarily reflect the views of USAID or the United States Government.