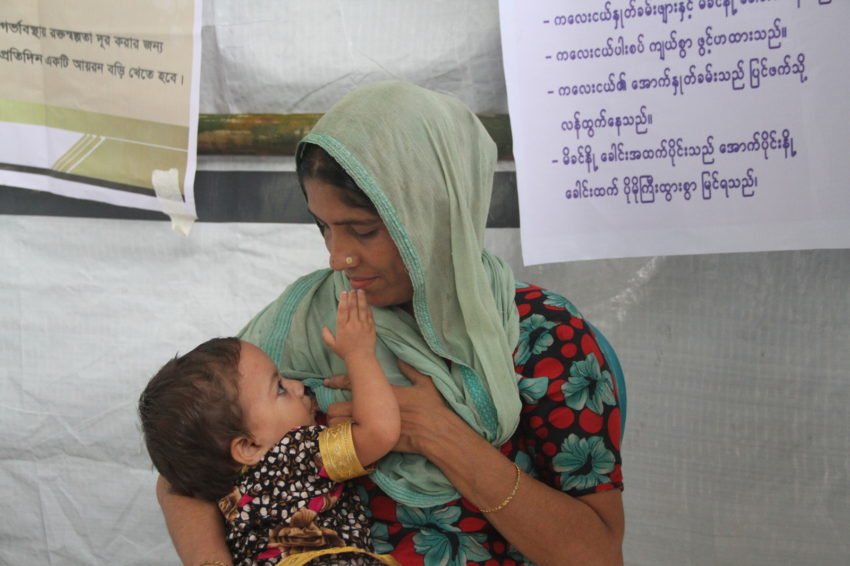 Amena, a refugee from Myanmar, is one of thousands of pregnant and lactating women who come to a space for women and young children in a Bangladesh refugee camp. “Here, we have got a very private place to breastfeed our children,” she says, “so I can breastfeed any time when my child is hungry and crying for milk.” (©2017 World Vision/photo by Juliet Mondol) 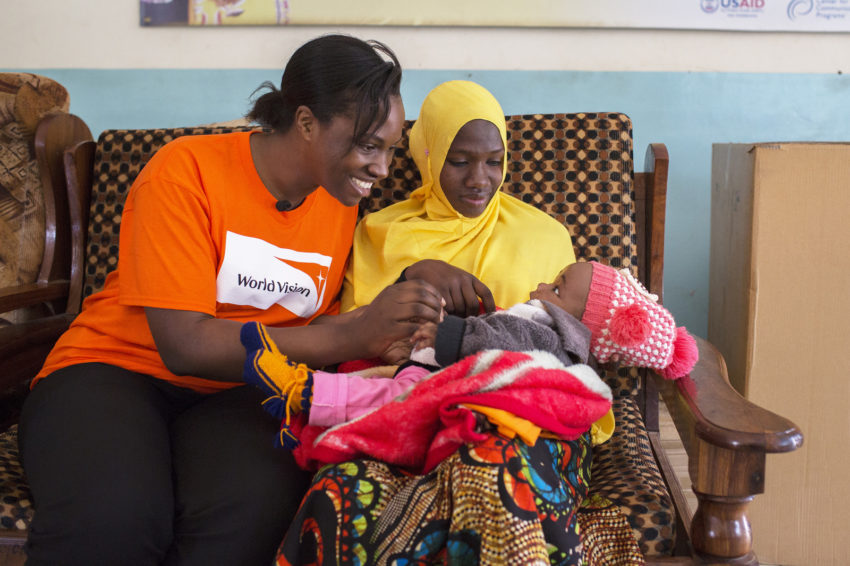 World Vision’s Tumani Fred (left) greets Hazla and her baby Humais before a training session in Tanzania on breastfeeding, compleimentary feeding, and the importance of vaccinations and regular checkups. After the session, each child is screened for malnutrition. (©2016 World Vision/photo by Michelle Siu) 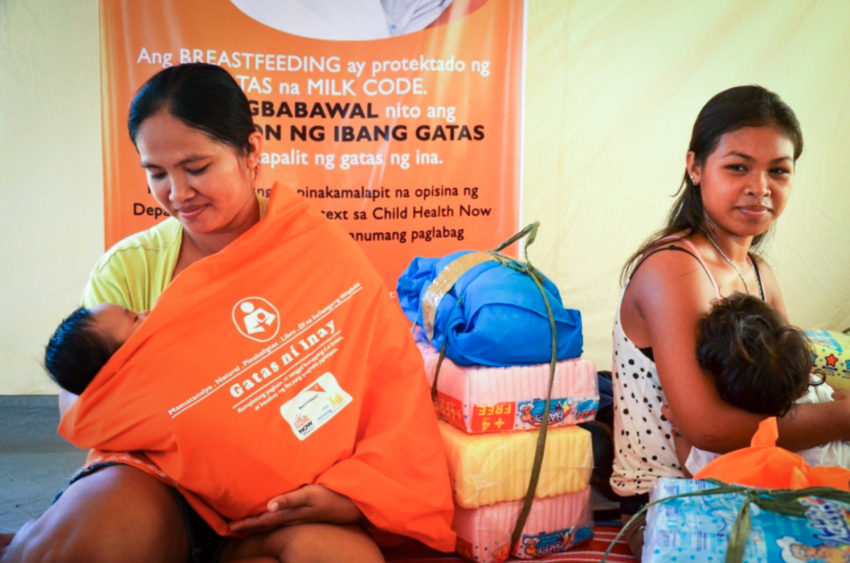 Mothers breastfeed at a World Vision center for women and young children after 2013 Typhoon Haiyan in the Philippines. Women at the center received baby kits with diapers, clothing, and other supplies. (©2013 World Vision/photo by Monalinda Cadiz)

Mother’s milk is the nutritional gold standard for infants and babies. So, when lives are disrupted by conflict and disasters, experts say it’s worth an extra effort to support breastfeeding mothers.

Each year during World Breastfeeding Week, August 1 through 7, it’s time to recognize the importance of breastfeeding and nutrition for children to get a healthy start in life.

Newborns and infants, pregnant women, and breastfeeding moms are the most vulnerable in times of conflict and disaster. They are often in emotional distress, homeless, have lost loved ones, and are struggling to get adequate nutrition. They may also be fleeing or living in the open without clean water and sanitation.

Saira, a first-time mother, fled Myanmar with her baby last year after attacks on her village. For three days, she and her in-laws walked through the jungle toward safety in Bangladesh, carrying the baby and listening to his heartbreaking cries.

“He was hungry, and I was unable to provide breast milk,” Saira says. “Nothing I did eased his hunger pains.” Saira was not only stressed; she was undernourished. When she reached a refugee camp, she received food aid for herself and help for feeding her baby.

“It’s not easy to continue to breastfeed after an emergency when mothers and systems are put under pressure, but it is very important [to continue] to ensure children and mothers are well,” says Sushila Shankar, a community nurse who worked with pregnant and lactating women after the Nepal earthquake in 2015.

One of those mothers, Srijana, gave birth to her daughter, Dipika, two months after the earthquake destroyed her home. “I’m thankful she’s healthy. She’s a survivor baby,” says Srijana.

After the earthquake, Srijana’s family lived in a tent and went to World Vision’s center in the nearby village hall to breastfeed, rest, and receive advice on breastfeeding and nutrition. The supportive atmosphere gave her confidence in her ability to care for Dipika. “I will take care of myself to breastfeed my baby,” she says.

Babies’ lives on the line

“It is very important to have space for women and children where they can have protection and privacy as well as some normalcy,” says Weihui Wang, a child protection expert with World Vision.

In 2015, Weihui set up Women and Young Children Friendly Spaces (WAYCS) in Serbia for breastfeeding mothers on the refugee route to Europe. In a roadside tent, women found a comfortable setting where they could pick up diapers and other supplies, breastfeed their babies, let toddlers play, interact with one another, and learn ways of sustaining the health and nutrition of their children.

In long-term disaster settings like Typhoon Haiyan in the Philippines and the Nepal earthquake, programs for nursing mothers helped families rebuild a sense of community.

“When we come here (WAYCS), the other mothers and I feel relaxed. We can forget our problems,” says 19-year-old Kapana, whose baby, Ujwal, was born a few weeks before the Nepal earthquake.

While they are nursing or changing diapers, mothers hear from health workers about the importance of deworming for children, prenatal and post-natal healthcare, issues of gender-based violence, and other health-related topics.

“Being with other mothers is helpful,” says Kathleen, a 23-year-old mother of three in the Philippines. “It feels good to have someone to talk to. I feel stronger and optimistic that I can overcome whatever difficulties that come my way.”

Dr. Yvonne Duque, who headed the program for women and babies in the Philippines, says, “World Vision is now raising an army of breastfeeding mothers; this means that we’re also raising an entire generation of breastfed children that will play a big role in restoring a strong community base of people who will grow healthier and more resilient to disasters.”

Baby formula frequently appears high on the list of supplies that well-meaning responders want to donate when an emergency strikes, says Minnie Portales, former emergency coordinator for World Vision in the Philippines. After Typhoon Haiyan, World Vision took a strong stand for breastfeeding, even turning down donations for infant formula from a Filipino celebrity.

The 1989 earthquake in Armenia provided health experts with a living example that resorting to baby formula after an emergency can have generational ill effects. Many aid organizations provided large amounts of free infant formula to families in severe economic straits following the disaster. Subsequent marketing by baby food companies helped continue the trend. Breastfeeding in Armenia declined dramatically after the quake, and 25 years later it was still down by 20%.

Other measures of optimal child feeding were low too. Only 36% of newborns were breastfed within an hour of birth, and only 35% were fed breast milk exclusively during their first six months.

Manushak Grigoryan, an Armenian mother of two, grew up in a society that didn’t value breastfeeding. “Breastfeeding was complicated with my first baby,” she says, “so I easily replaced [breast milk] with formula and then with cow’s milk.”

Manushak is convinced that she’s given her second child a better start on life as a breastfed baby. She wishes she had had the knowledge and encouragement she needed to do the same for her first.

Explore ways to support moms in need around the world.