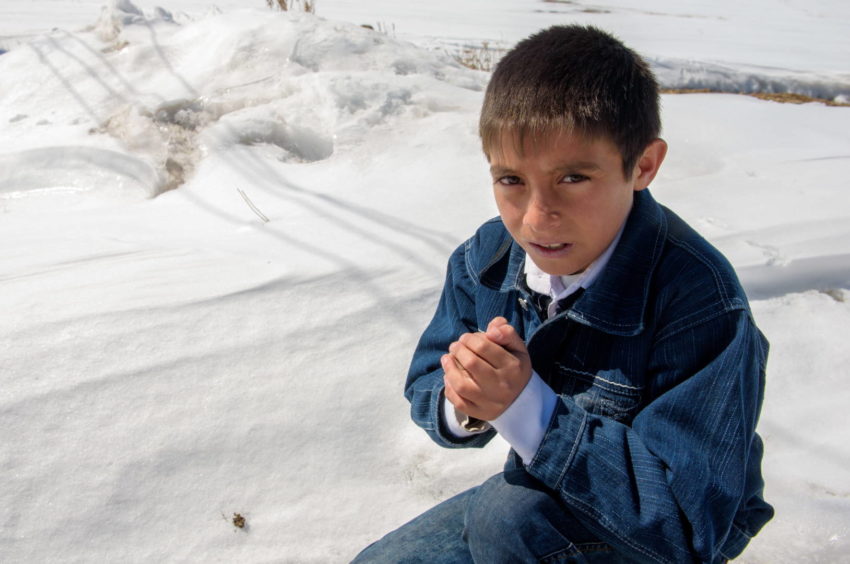 Hovhannes Petanyan, 11, used to only have this jean jacket to wear in Armenia’s harsh winters. (©2017 World Vision/photo by Laura Reinhardt)

At this time of year, most of our thoughts can turn to winter wonderlands. It might be time for ice skating, skiing, snowshoeing, or building a snowman — if we’re so inclined. We also have the right gear to make these outings fun.

That’s not the case for many children who face bitter cold around the world.

For children who lack the essentials like warm clothes, boots, and coats, winter is no wonderland. It’s a time when they can’t go outside. They’re confined to their homes due to the deadly cold.

In Armenia’s northwestern Shirak region, low temperatures have historically hovered around zero during December and January. The landscape resembles a white desert because of its sparse vegetation and the snow-blanketed ground that shimmers like white glitter. Winters can last between six and seven months of the year.

A brutal cold snap hit the region in February 2016. Temperatures dropped as low as -37 degrees Celsius (-34.6 F) and stayed below freezing for days.

The Petanyan family lives here. The two youngest children — Hovhannes, 11, and Stepan, 10 — only had jean jackets to fight off frigid temperatures.

They crossed snowfields dotted with utility towers that carry electricity to their community. The brothers said they shivered and tried to run, but the snow was deep, and their feet and fingers got numb during the 25-minute walk to school.

When the weather got too cold, they were forced to stay home. The boys do well in school, but if they miss too many days, they could begin to fall behind in their studies.

Thankfully, World Vision provided warm winter coats — a generous donation from one of World Vision’s corporate partners — to the boys. That leads to fewer missed school days because Hovhannes and Stepan can bundle up warmly against the elements.

Two other brothers living in Armenia, Andre and Artem Grigoryan, were also not initially excited by the snow and freezing conditions. Instead, it brought them shame because their family couldn’t afford warm coats, gloves, and boots.

Their father, Garnik, is a maintenance worker at a hydroelectric plant. He considers himself fortunate to have employment since few men are able to find work in the rural regions of the country.  Men often migrate to Russia or Turkey to seek employment.

Still, Garnik doesn’t earn much, and sometimes he doesn’t receive his full wages or doesn’t get them on time. This makes it difficult for the family to afford necessities like winter clothing, which is especially important since they live in one of the coldest regions in Armenia — Amasia.

When Artem was 3 years old, he suffered from frostbite. His hands had turned red and were swollen after being outside in the cold. Artem’s mother, Anna, took him to the doctor, who diagnosed the boy. The doctor told Anna that her son’s hands would be sensitive to cold for the rest of his life, and he would need to wear warm gloves.

Like all growing children, the brothers had outgrown their clothes and boots. To make do with shoes too small, Anna had to cut off the tops of Andre’s boots so he could get his feet to fit, but that meant slushy snow and ice would get inside too.

Eight-year-old Artem had holes in the soles of his boots, and the cloth tops soaked through quickly.

Understanding the boots’ worn condition, feeling how very cold it was outside, and especially with Artem’s history, Anna kept the boys home from school. A 10-minute walk in the bitter cold  was too much.

This devastated the boys.

Anna says, “It broke my heart when they asked me, ‘Mom, how come our neighbors have good shoes and coats and we don’t?’”

When friends came by to walk with the boys to school, they hid inside. They were ashamed to come to the door to tell their friends that they couldn’t go because they didn’t have the warm coats or boots they needed.

Anna herself didn’t want to admit to the need, so she told their friends they weren’t going to school. Andre and Artem hid inside and watched through their window as their better-dressed classmates went on to school.

“I was very sad when we couldn’t go to school,” says Andre. “When I got back, I caught up with work as quick as I could.”

Then World Vision offered the brothers warm coats. Corporate donors provided them as a product donation, which enables World Vision to pass on these much-needed items.

The donated coats are larger, and the boys will have plenty of room to grow. Equally important, they received shin-high yellow boots that will keep their feet warm and dry.

Both sets of brothers can now attend school without fearing the harsh winter weather on the way. They’re free from the shame of not having clothes and boots that allow them to get to school. They have what they need to keep them safe and warm when they’re out in their winter wonderland.

Kathryn Reid of World Vision’s staff in the U.S. contributed to this article.

Help keep a child in need warm this winter! Give Now.

When you sponsor a child, you help keep him or her warm, fed, in school, and more for the long term. Choose your child in Armenia today!

Help keep a child in need warm this winter.