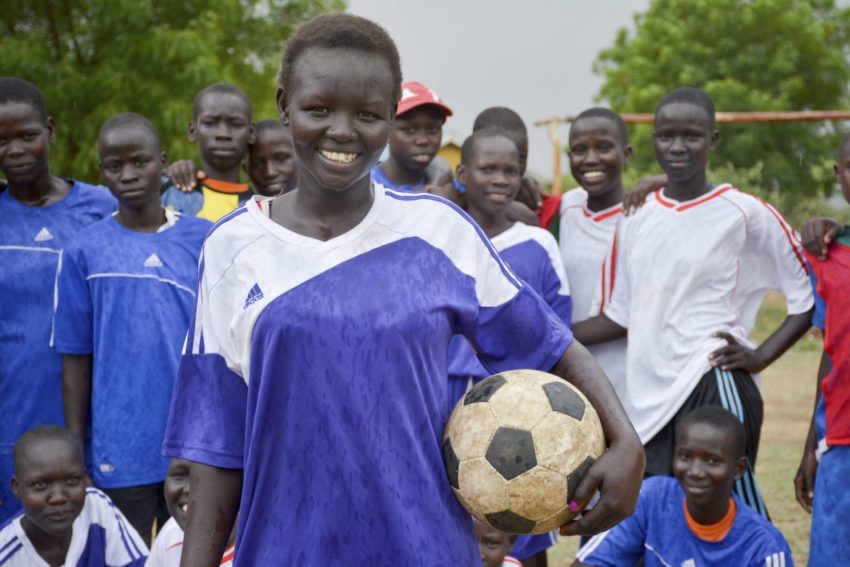 Dina, 18, has gained confidence by playing soccer at a World Vision Child-Friendly Space in South Sudan. Instead of getting married as a teenager, like her mother did, she wants to get an education. (©2018 World Vision/photo by Mark Nonkes)

Dina’s arms stretch out. She runs across the field, her head back, whooping in celebration. She’s just scored a goal, her first of the match.

This goal isn’t only a quick point. It’s a victory for women’s empowerment in South Sudan.

Dina is a member of an all-girls soccer team, supported by World Vision that is breaking gender stereotypes.

“My parents tell me not to play soccer — it’s for boys,” the 18-year-old says. “I still play though because I want to be as good as the boys. No, I want to be better than them.”

Margaret is 14 and plays as a midfielder.

“I feel happy when I play football,” Margaret says. “I don’t think of any problems at all.”

For girls in South Sudan, adolescence is often lost. The country has one of the lowest enrollment rates of girls in secondary school — only 7%. More than half of all girls will be married before the age of 18.

Dina looks no further than her own mother, Magline, to understand why.

Magline was only 13 years old when she was forced to get married.

“It wasn’t my intention to get married. I wasn’t there willingly. I didn’t want to get married, but I had no choice,” explains Magline, who now has five children.

Magline’s parents died when she was 4 years old. Left in the care of relatives, she was married off the third time she menstruated.

“I wasn’t allowed to leave,” Magline says. “I was feeling so sad at that time. Only when my husband went away, that’s when the happiness could start again, when I was left alone.”

Magline and her husband had five children together — three girls and two boys.

“I decided my children must go to school,” Magline says. “I don’t want them to be like me. I’m blind — meaning I cannot read or write. I want my children to have a different life than the one I have lived.”

As for her daughter playing soccer, Magline says it’s okay — but Dina’s education needs to come first. Dina’s older sister has recently graduated from university, and Magline is hoping all her children will be able to finish university before pursuing marriage.

“I feel like football has made me stronger,” Dina says. “Football makes me the happiest. When I play, I don’t think about anything else; I just concentrate. When I go to school, I can concentrate better too.”

On the soccer team, the girls show their community and themselves they are powerful. It’s this confidence that’s required to stand in the face of continued gender discrimination and to believe that change is possible.

“Boys and girls are able to do the same thing. Girls can play good, sometimes better than boys,” says Margaret.

Child marriage is not only a thing of their parent’s generation.

“There are some bad parents who force girls to get married; they don’t ask the girl’s consent. My friend, it happened to her. She was married when she was 15,” says Mary, a 15-year-old midfielder. “Now the girl is pregnant.”

“Most girls are in the lower classes, in class one, two, or three. But when they reach class five, they are not there. Maybe they are married by then,” says Margaret.

Through the soccer team, organized by World Vision Child-Friendly Space facilitators, the girls learn how to identify, report, and respond to abuse or threats of child marriage. This is one of many ways to help end the violence adolescent girls face in South Sudan.

The team also creates a sense of connection and enables encouragement among peers. The girls rally together to support one another on and off the field.

Dina, Mary, and Margaret continue to study, thanks in large part to their parents’ support and World Vision’s commitment to help girls understand their value and the importance of education for their future.

“I should be struggling with school, and after I should think about marriage,” Mary says from the sidelines of a soccer match.

After she says that, she watches one of her teammates kick the ball between the goalposts.

Mark Nonkes is a disaster communication adviser for World Vision in East Africa.