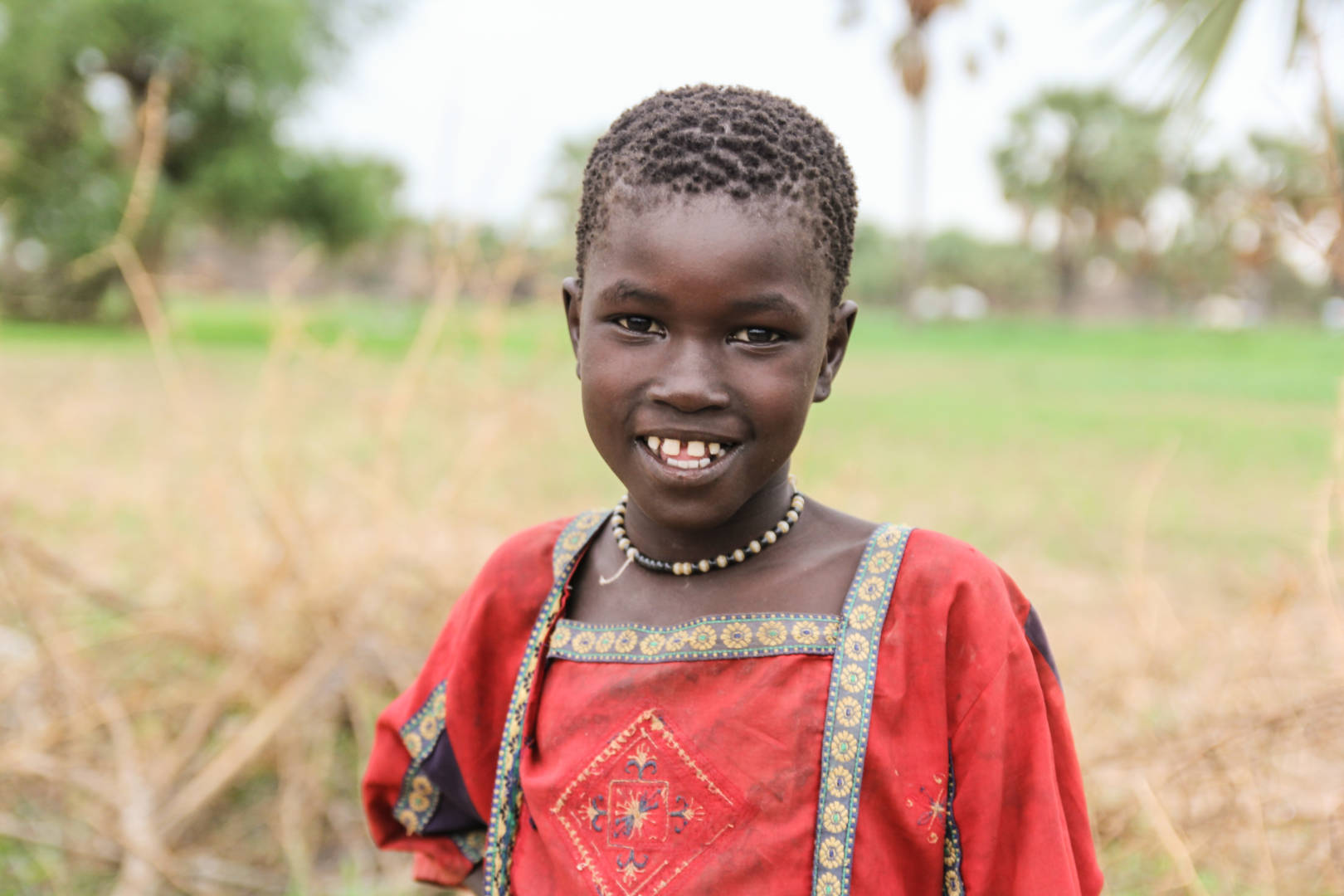 Ayen is eight and during the conflict, she was separated from her family. World Vision helped to reunite her family in one of the internally displaced persons (IDP) camps. (©2016 World Vision/photo by Stefanie Glinski)

Armed conflict and food shortages make South Sudan one of the most difficult places to live right now. General insecurity across the country continues to increase food insecurity for more than 5.5 million people, and close to 2 million people are displaced throughout the country.

Instability has reigned since 1955 as southern Sudan fought against government forces in the north, finally achieving independence in 2011. But peace has not held. Fighting renewed in December 2013 among the country’s factions. Since then, 1.9 million people have fled the country because of conflict and hunger, and Uganda now hosts more than 1 million refugees from South Sudan.

Eight-year-old Ayen vividly remembers waking up during the night to sounds of violence in her village in South Sudan. Instead of darkness, there were lights everywhere. Gunshots rang in her ears, and she hid as her family scattered in all directions.

In the morning, she became more frightened when she couldn’t find them.

“I was scared and cried,” Ayen says. “I didn’t know what had happened.”

Her aunt took her in, and they sought protection in one of the many settlements for internally displaced people throughout South Sudan. A few weeks later, World Vision staff took their names and information. Ayen and her mother were reunited days later.

“It was the happiest day since our escape,” Ayen says.

Join us in praying over the people of South Sudan as the world’s newest nation struggles to survive.

Pray for peace in South Sudan

Nine-year-old Kai lives in a tent with his mother and six siblings. When fighting broke out in their village, his father and grandmother died trying to flee, and the rest of his siblings — three brothers and two sisters — are still missing. “We had to flee many more times. Whenever fighting broke out, we had to run away again. I hope we are safe now,” Kai says. “I don’t want to run anymore.”

Conflict has threatened this area of the world for decades. Yet many people and groups are working together to find a peaceful solution to the multiple challenges. A peaceful solution will allow families to return home and begin to rebuild their lives in safety and security.

Prince of Peace, You “make wars to cease to the ends of the earth … ” (Psalm 46:9). As families like Kai’s flee from violence, protect them and bring peace among those who are fighting. Help South Sudan’s leaders to amicably settle their political differences. In Your mercy, bring peace to this nation.

Eleven-year-old Abuk and her three younger siblings were driven from their village by shooting that claimed their mother’s life, and their father was killed in the war. “I became the mom,” Abuk says. One day, World Vision staff member Michael Angok came to the settlement where they were staying. He had found their uncle.

World Vision is finding extended families for orphans like Abuk and reuniting families who have been separated by the conflict like Ayen and her mother. Despite the conflict making life difficult for aid workers in their families, World Vision staff have served more than 2 million people, at least half of them children, with food, healthcare, education, protection, peacebuilding, water and sanitation.

Our Redeemer, we praise You for the lives that have been saved and the families reunited. We pray for the safety and security of aid workers in this conflict-ridden area. Give them strength and courage for each day’s tasks. We ask You to sustain staff and encourage them during difficult challenges. Empower World Vision to assist more children and families, especially as food insecurity increases, serving as Your hands and feet.

Ten-year-old Djok and his family fled to Uganda when their village was attacked and his father was killed. “It’s actually like living in South Sudan, except for that it is safe,” Djok says. “Everyone in my village is from my country, and many want to go back one day.” After school, Djok finds joy playing with the soccer ball he made of several plastic bags and some rope. “It’s not very big yet, but I can play with it,” he says. “I hope I can grow it bigger and have a real game with my friends here.”

Even before South Sudan voted to break away from Sudan, the lives of children were in danger. Today, malnutrition still challenges the youngest, keeping millions from reaching their fifth birthday. U.N. and humanitarian groups’ staffs are rushing to vaccinate children against diseases like measles and typhoid and to provide food resources.

Great Comforter, we lift up South Sudanese children to you. In Your mercy, provide children with what they need to survive. Heal and strengthen their tiny bodies so they may one day experience fullness of life. Our hearts ache for Djok, who lives in circumstances no child should endure. We ask for the conflict to end with a peaceful solution so Djok and his family can return to their home.

While her husband stayed in their home state of Unity, Adakien and her four children have moved from camp to camp over the past two years to flee the violence. She’s not sure if her husband is alive, and she has no way to contact him.

“My country hasn’t made great advances in the last five years [since independence],” Adakien says. “I have seen suffering and fighting, but I am still proud. We have our own country, and I wouldn’t want to change this for anything.”

Father God, protect the children and families displaced and separated by conflict as they pursue an enduring peace. Most of all, may they find hope in You. Give them courage and continued resilience to hold on to what is good.