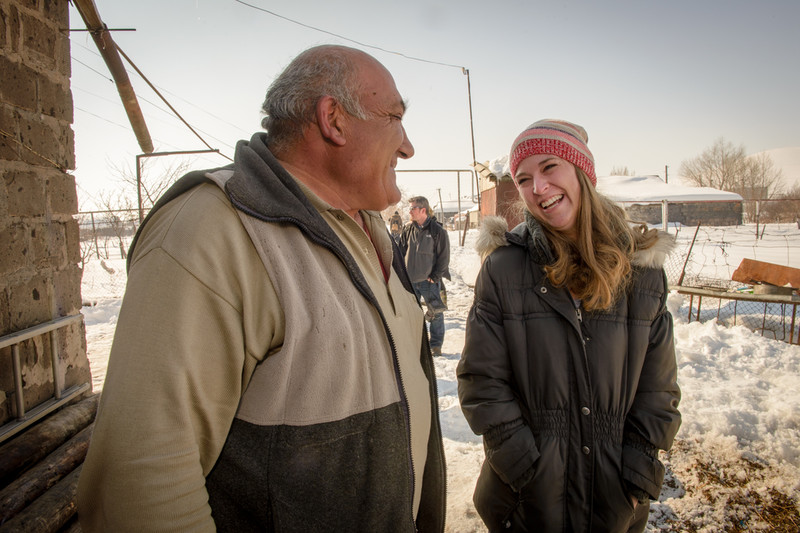 Addie Zierman expected to see poverty in Armenia, but she found so much more. (©2015 World Vision/photo by Laura Reinhardt)

When World Vision asked me to join a blogger trip to Armenia, I almost didn’t go.

Extreme poverty makes me feel powerless, and I hate feeling powerless. It forces me to struggle with God’s goodness and my own privilege. I was afraid that if I went to Armenia, if I came face to face, day after day, with that systemic and generational poverty, I would leave feeling guilty and defeated.

That’s not what happened.

Don’t get me wrong — I did see poverty. I met a family who lived in an old shipping crate. The father spent his days searching for kindling — any kind of kindling — to keep them warm. The mother was younger than me.

There was a woman who struggled to keep her seven children warm and fed in a two-room shack; there was an older couple whose ceiling was caving in and who walked, along with their 12-year-old son, several miles a day to clean other people’s barns for what amounted to about $1.40 a day.

But I also saw a hundred brilliant creative assaults on that poverty.

There is a small catering business that formed as a result of a World Vision class on food design. They served us fruit that looked like flowers and showed us pictures of them catering weddings — supporting their families by serving pretty platters of Armenian favorites to brides and grooms.

In Armenia, World Vision is teaching communities how to dry local fruit and connecting them to chocolatiers who buy it. They are teaching mothers how to cook healthy meals with cheap ingredients, how to stretch their resources, how to take control.

Someone had the idea to build a greenhouse by a school, and the students are learning to plant, reap, and sell their produce. Someone else started a computer class where students learn programming and robotics, becoming equipped to find a job in an up-and-coming IT center of Armenia.

A group of World Vision-sponsored teens also formed a club to help their community. Their many-pronged approach to poverty includes puppet theater, libraries, food baskets, and a campaign in which young people roller-skated around their city, asking people to exchange their cigarettes for apples.

In Armenia, poverty wasn’t the dominant narrative. Creativity was.

In The Message Bible, Eugene Peterson translates Galatians 6:4-5 like this: “Make a careful exploration of who you are and the work you have been given, and then sink yourself into that. Don’t be impressed with yourself. Don’t compare yourself with others. Each of you must take responsibility for doing the creative best you can with your own life.”

I always believed that to fight poverty, I had to give more, more, more. I imagined that The Need was a giant vacuum and that if I let myself care too much, it would suck up everything I had.

But the truth is that the war on poverty isn’t really about more money, more resources, more energy. It’s about having the courage to offer your “creative best” in the face of great need. It’s about the courage to look pain straight on and see not hopelessness but possibility.

It’s an act of subversive creativity to offer a class on food design in a community where just getting enough bread is a challenge. To look at wintering fruit trees and see not death but dried fruits in chocolate. To take a bag of cheap staple foods and say, “This is what we have. But there is so much we can do with it.”

I went to Armenia expecting — and fearing — I would see hopeless poverty. What I actually saw was what can happen when people respond to that poverty with their creative best.

And that’s something any of us can do — both here in our own neighborhoods and at the far reaches of our broken, beautiful world.

Addie Zierman is a writer and speaker. She holds an MFA from Hamline University and is the author of When We Were on Fire: A Memoir of Consuming Faith, Tangled Love and Starting Over. She lives in Minnesota with her husband and two sons and blogs regularly at addiezierman.com.