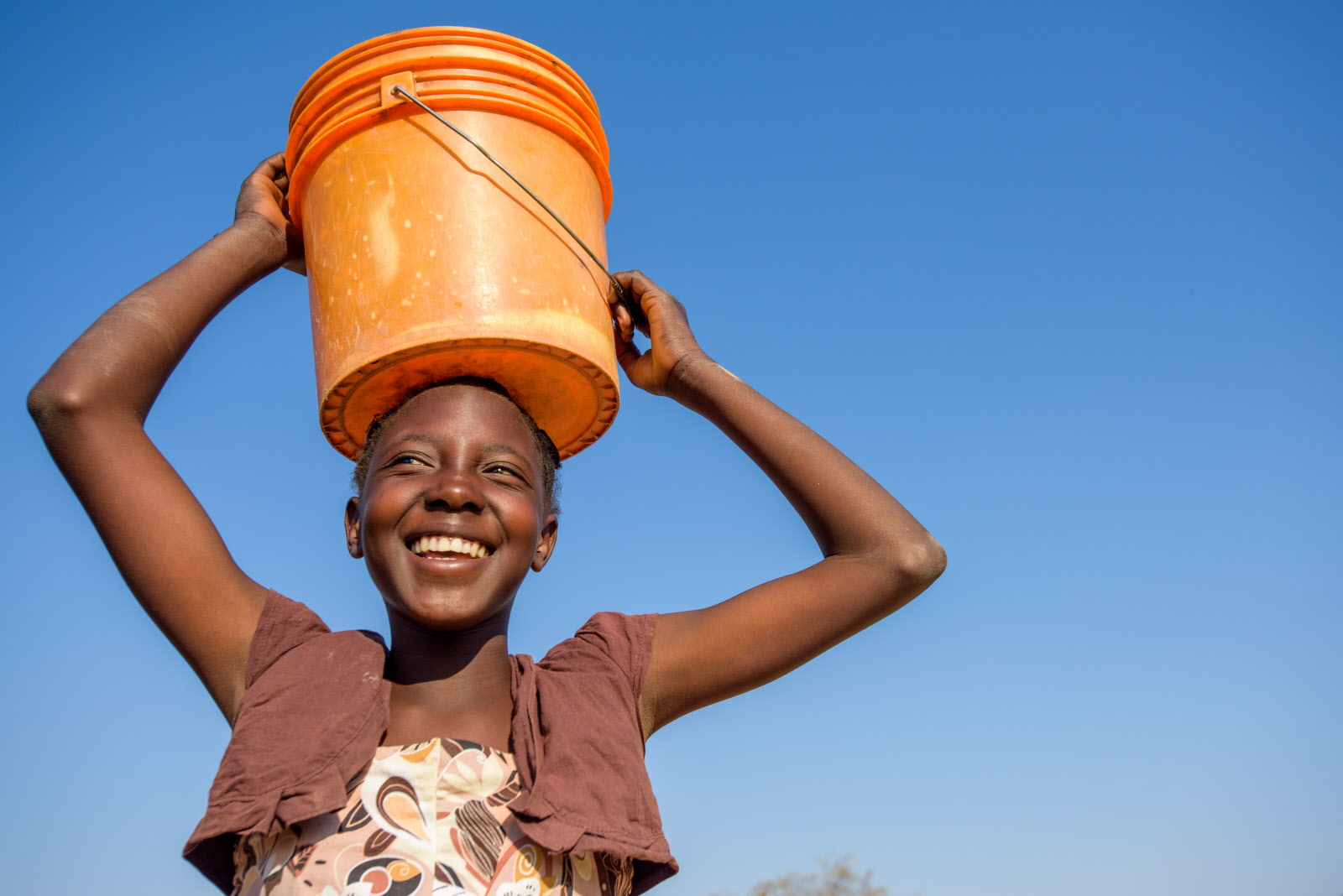 Everlyn's future is bright, as child sponsorship and clean water have made all the difference. She's in school, her mother's garden is thriving, and her father's faith is stronger. (©2015 World Vision/photo by Jon Warren)

Everlyn collects clean water from the borehole just a few minutes from her home. (©2015 World Vision/photo by Jon Warren) 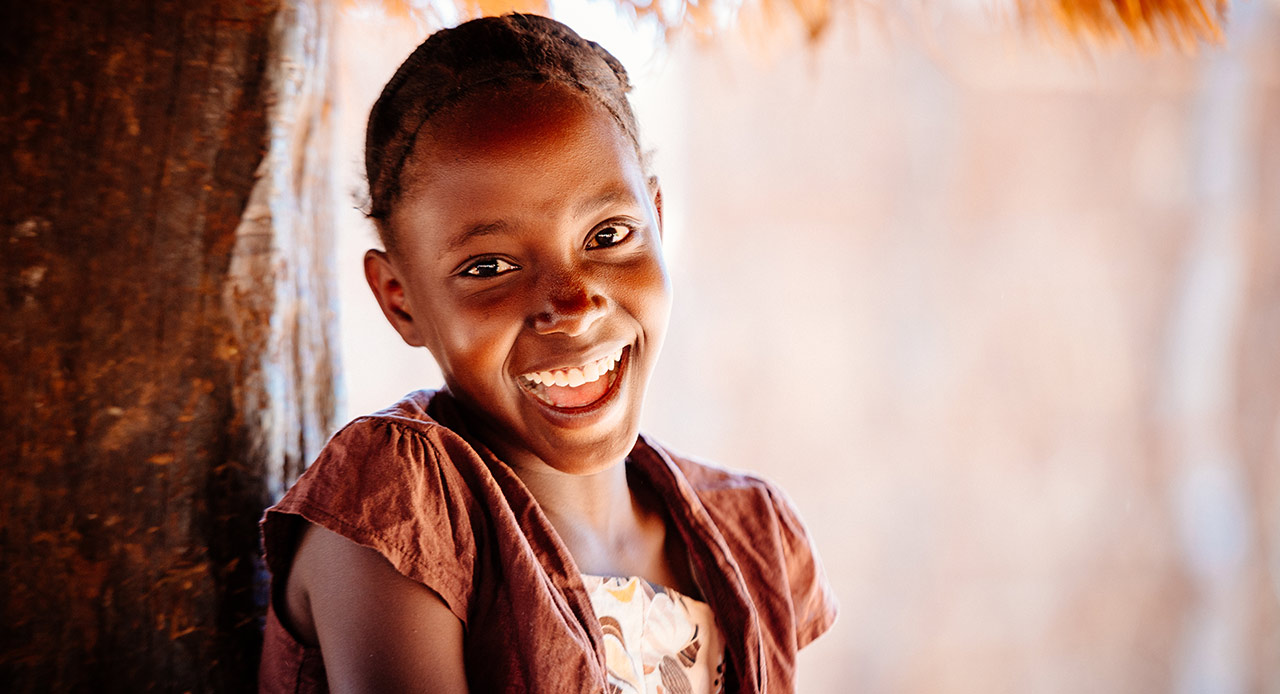 Everlyn, 13, a sponsored child, has a radiant smile that speaks volumes. In her community, World Vision drilled a clean water borehole, installed latrines at her school, and built a health center. Now she excels in school, is bound for university, and can attend church regularly with her family.(©2015 World Vision/photo by Jon Warren)

This is a hand-washing station outside the latrine at Everlyn’s home. World Vision staff trained her family in sanitation and hygiene. (©2015 World Vision/photo by Jon Warren)

Everlyn and her sister, Thandiwe (pink dress), pump clean water from the borehole just a few minutes from their home. (©2015 World Vision/photo by Jon Warren)

Everlyn’s mother, Eniah, now has a garden she uses to feed her family fresh, nutritious vegetables. Eniah got back four hours each day that she used to spend getting water. (©2015 World Vision/photo Jon Warren)

Benny, Everlyn’s father, says the spiritual life of his family has changed. “Now we can go to church proudly. I couldn’t go to church dirty.” (©2015 World Vision/photo by Jon Warren)

Everlyn has fun with her friend. (©2015 World Vision/photo by Jon Warren)

Too many stories from Africa have an unhappy ending. But not Everlyn’s.

You can describe the difference in three simple words: Just add water.

A 13-year-old sponsored girl living in Hamaundu, Zambia, Everlyn Hampande’s future wasn’t always bright. She used to get water five times a day — because she had to.

“My legs would ache,” she recalls. “We never used to bathe at home.”

Everlyn’s sister dropped out of school. Now she has a baby — at much too young an age.

World Vision drilled a borehole for the community in 2012.

Water engineers also installed latrines at Everlyn’s school and built a health center in the community.

“In the past, girls fetched water. Now boys are accepting to do so,” explains Winnie Mutaka, the secretary of the group that manages a nearby borehole. “In the future, they may be equal. They may both fetch water.”

Everlyn’s mother, 42-year-old Eniah, has six other children. She recalls a community meeting with World Vision prior to the installation of the borehole.

“We were told that everyone should have five things — a toilet, a rubbish pit, a hand-washing station, a bathing shower, and a dish rack,” she says. “We never had such things before.”

Now, Eniah has an extra four hours each day that she used to spend gathering water.

“It takes minutes to get to the borehole,” she says. “I can quickly draw water. I come home, wash clothes, and then it is off to the garden to pick some vegetables.”

In her garden, she grows fresh produce that adds nutrition to her family’s diet, improving their health — already much better since diarrhea is no longer an issue. Eniah also makes fritters to sell for income.

Everlyn’s father, Benny, says the spiritual life of his family has changed

“As a result of the water,” he says, “we are building a church.”

Why? Because there now are too many people sitting on the floor. There isn’t enough room for parishioners anymore since regular hygiene means they aren’t embarrassed to attend services. Every Tuesday, Benny gathers with two-dozen men to make bricks to construct the larger church building.

For her part, now that she has clean water, Everlyn is learning about the theology of water, using World Vision’s devotional, Jesus the Source of Living Water. Her teacher, Pastor Bless Chilala, 47, says he sees changes in the now 13-year-old.

Today Everlyn is at the top of her class and is university-bound. She studies hard and plays with wild abandon with her friends — her favorite dog, Benjy, by her side.

Nothing will stop this village girl from reaching her full potential.