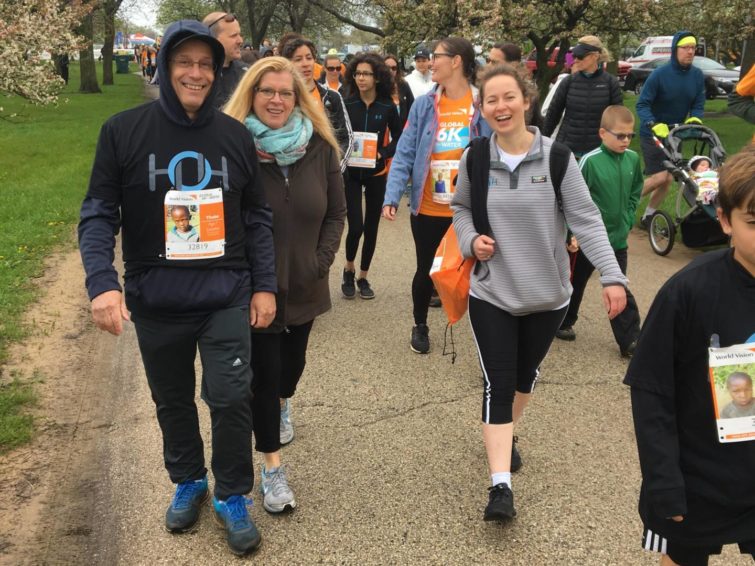 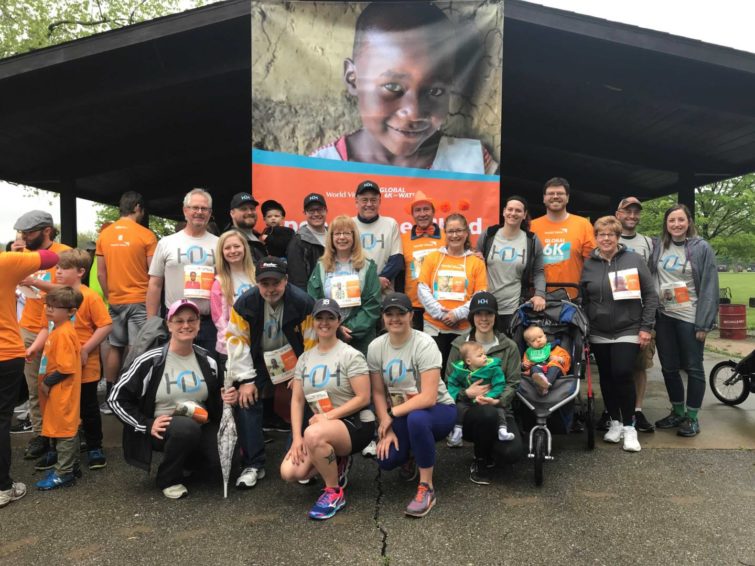 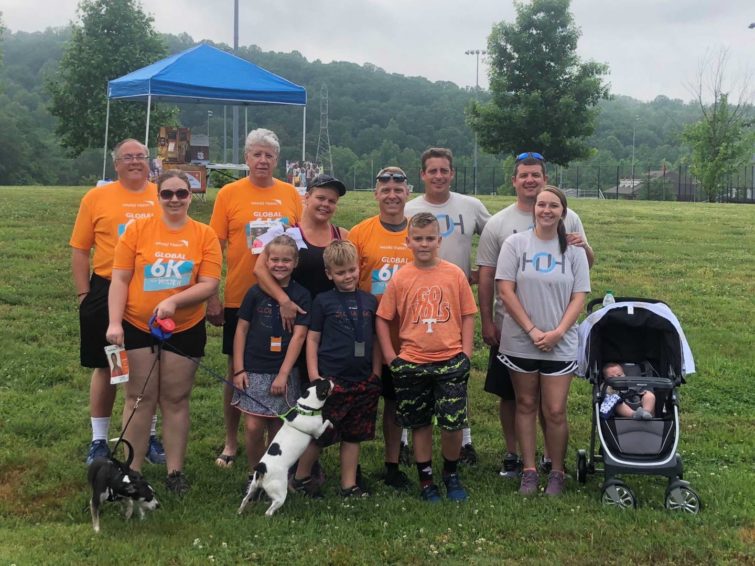 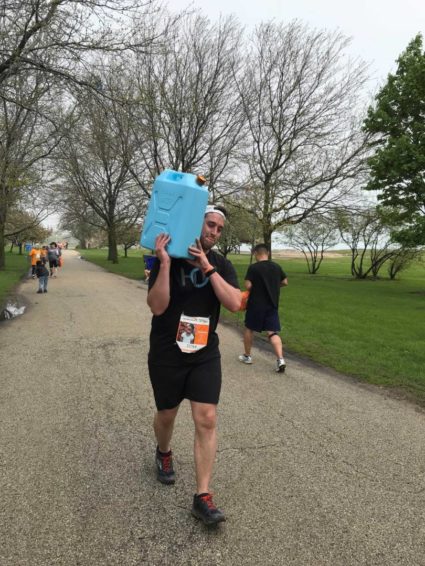 A HOH Water Technology employee carries a jerrycan of water at the 2018 Global 6K for Water. Jerrycans can weigh between 40 and 50 pounds when filled, which is what many women and girls in developing countries carry each day for an average of 6 kilometers to use for cooking, cleaning, and bathing. (Photo courtesy of HOH Water Technology)

Tom and Reid Hutchison share not just a name that runs a third-generation family-business, but they also share a passion for bringing clean water to people in need.

Their company, HOH Water Technology in Palatine, Illinois, specializes in water treatment solutions. Tom serves as president of the Chicago-area organization, and Reid, his son, works as the director of marketing. While their business has a stake in the water game, God placed a burden on each of their hearts in different ways to help solve the global water crisis.

Since then, both Tom and Reid have become passionate about educating and inspiring HOH’s 100 employees and the company’s network about the worldwide lack of access to clean water and participating in the annual Global 6K for Water. Here’s how that happened.

In 2012, Tom traveled to Indonesia with his church as part of a short-term mission trip. The trip wasn’t based on doing any sort of water ministry, but while there, he connected with an organization called Water Mission that was working to provide safe drinking water across the country.

“It was a pastor doing it who was in the water treatment business,” Tom says. “I knew his company, and I thought it was amazing.”

As he looked at the organization’s work even more on the trip, he became even more impressed by the work it was doing.

“I’m a pastor, and I’m a water guy, so I went and looked at his installations and was amazed that this work was being done,” Tom says. “I was convicted that our company should be doing it.”

As he headed back to Illinois, he began to think about how he could help be part of solving the problem and, beyond that, how HOH could be part of ending the global water crisis.

Running to make a difference

Fast forward to the spring of 2014, Reid’s Mission Church community had a few people who were starting a group to run the Chicago Marathon together with Team World Vision while fundraising to help provide clean water to families in Africa. Reid had run a marathon before, so he was intrigued, and a chat over pizza seemed like a good idea.

“I hadn’t heard much about the clean water crisis, but I did it to be part of the community and be part of the cause together,” he says. “I had a powerful experience both training and fundraising.”

In 2015, he again signed up, and that year, through training, he became inspired to sponsor a boy named Alfred in Uganda. His church collectively sponsored children from the same community and visited to meet their sponsored children later in the year.

“My wife and I traveled there together with our church community, and we were completely sold out and bought into the way that World Vision was making an impact and transforming lives through clean water and through the change initiatives in developing communities,” Reid says.

On that trip, someone from Team World Vision shared the idea of Reid running the Comrades Ultra Marathon in South Africa and raising 56 child sponsorships in Alfred’s community to represent the 56 miles he would run.

“Seeing the work at hand locally, I just felt convicted and compelled to do more,” Reid says.

He trained and fundraised, and later that year ran the race. Although he fell 13 miles short of completing the race, he did successfully complete the sponsorship goal of 56 children sponsored. After the event, he again visited Alfred and his community in Uganda.

“I shared with him that I sponsor him because I care about him and that others in his community are sponsored because of this race and this work,” Reid says. “I have this dream that this would lead to long-term transformation in this community.”

Reid is excited to see the lasting impact sponsorship will make and how sponsoring Alfred could equally lead to lasting change.

“I had a vision for him and realized that I may never see him again, but the investment I’m making in his life may result in him becoming a leader in his community and him participating in helping transform it into a healthier place,” Reid says. “I love that about the child sponsorship program — they reach kids because they’re the source of new life for a community, and it’s not just a five-year thing. It’s a 10- to 20-year thing.”

As Reid’s running path was unfolding, he was also having conversations with Tom and asking questions about his dad’s experience in 2012. The two were searching for ways to integrate their shared desire to end the global water crisis with their work at HOH.

Through Reid’s involvement with Team World Vision, he had learned about the Global 6K for Water. He thought the event could be a great way to engage HOH employees.

“It’s an amazing way to get people to that first step, which is awareness of the issue, and, secondly, to feel like they’re part of doing something about it,” Reid says.

Tom agreed, so in 2017, HOH made a $25,000 donation on behalf of its employees and encouraged people to come and walk the 6K at the World Vision-hosted site in Chicago. Six kilometers is the average distance children and families in the developing world walk for access to water. Forty people joined Reid and Tom in making that walk. Reid remembers how excited people were but also how surprised so many people were as they learned about the global water crisis. Additionally, the event helped the organization.

“It was a difficult season for our business that summer — a lot of turmoil and a lot of instability, and people were nervous,” Tom says. “I remember it just really brought our company together, and that was really important and helped during that particular time. We understood that we were part of something bigger than just doing our day-to-day jobs.”

After the first year, people became even more excited about the Global 6K, and Tom and Reid wanted to extend participation beyond their Chicago-area office for 2018. So last year, their five satellite offices served as Global 6K host sites, and their Palatine staff participated in the larger site hosted by World Vision in Chicago.

“There was a sense of unity around us giving back together as one company,” Reid says. “We’re on a journey of helping employees and people in our network adopt this mission as their own to make a lasting impact with water.”

Last year, HOH made a $30,000 donation to help fund clean water projects, and their participation grew as 140 people came out to participate in the Global 6K for Water.

“What I love seeing is a family with kids walking, and people connecting the dots that it’s kids just like their own who are walking 6 kilometers a day for water, and it keeps them from being in school,” Reid says.

HOH also began reaching out to its network and inviting vendors, customers, and partners into their new passion as well.

“There are a lot of organizations that desire to make the world a better place,” Tom says. “There’s a really good business reason to connect with those people.”

He encourages other business leaders to use their positions for good and invite others in their network to participate in the Global 6K. Additionally, as a business, being part of something like the Global 6K helps with recruiting quality employees.

“As we compete for talented people who want to join the organization, we’re aware that as we create this kind of culture, especially the younger generation, they’re going to say, ‘I want to be part of that too,’ and it will help us attract the right kind of people.”

As HOH prepares for the 2019 Global 6K for Water on May 4, 2019, Tom and Reid are hoping to have 250 people involved this year across their five host sites and Chicago participation.

“Jesus Christ is the living water, and we’re called to deliver water to a thirsty world, and I do that because I’m a Christian, and that’s my reason,” Tom says. “What I’d love is that they do this as part of the company, so we’re one team doing this.

“If I had a vision, I’d love for people to make this their own.”

Register as a host site for the Global 6K for Water on May 16, 2020, and bring clean water to people in need!