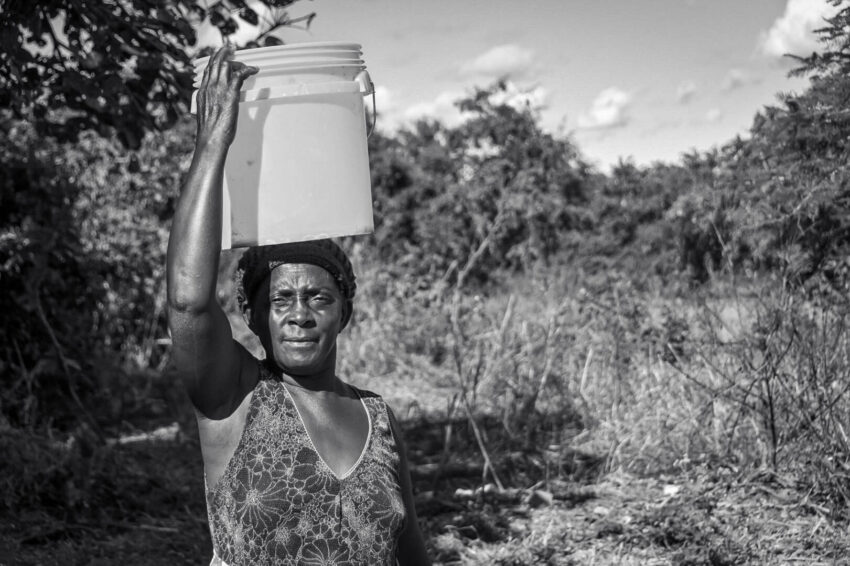 Maves holds a 20-liter bucket on her head that she previously carried to gather water, walking up to four miles a day. (©2021 World Vision/photo by Agatha Mali)

Water is essential to life, but in the sparsely populated Jembo community of southern Zambia, it’s long been threatened. For years, the lack of clean water has hindered access to education, practicing good hygiene, and generating an income. Frustrations and anguish grew as time passed.

Before the sun would break the morning horizon, 59-year-old Maves began her day with a half-mile trek to reach murky water that was filled with bugs and bacteria. Alongside her walked Juliet, her 7-year-old granddaughter who helped her collect water for their home. They repeated this task up to four times a day.

“Our community depended on the well, and it made it hard for me to do other activities because I would spend almost the whole day at the water source waiting for the dirt to settle so that I could at least fetch a little clearer water,” shares Maves.

There was no other choice. No alternatives to the contaminated water that inevitably would increase the community’s vulnerability to waterborne diseases. The wait to get water was long as the community formed queues. “It was tedious. I would mostly spend the whole day drawing water,” Maves exclaims. Gathering water occupied many hours of Maves and community members’ days, rationing water to reduce time spent on collecting it.

A way of the past

World Vision is reaching one new person every 10 seconds and three more schools every day with clean water. Maves’ home sits near Jembo Missionary School where World Vision installed a water hand pump. It was later mechanized to pump water to taps even closer to homes. Maves and her community have since bid farewell to their long commutes. With improved water access they now reallocate their time to more productive ventures.

“Walking long distances and spending so much time drawing water is now a thing of the past because there is clean and safe water just at the doorstep of my home.” Maves continues, “I now grow vegetables and sell to community members, which has become a source of income for my family.”

This source of income enables families like Maves to better support their children with improved nutrition, medical care, and education.

The positive effects of clean water within Jembo echo throughout the community. Michael Chaambwa, a 37-year-old, senior teacher at Jembo Primary School, sees the difference that clean water makes. “It has improved hygiene standards and reduced the burden of students having to carry heavy containers for gardening,” says Michael. “In many cases, children used to be very late for class as they spent time fetching water.”

Planting roots toward the future

With clean water now available in Jembo, students have a growing interest in agriculture, the school’s extracurricular activity. “Students will participate in the school’s agricultural projects since there is adequate water to increase the productivity of crops unlike in the past,” says Michael. He believes the program will promote educational activities and eventually lead to income generation. He also explains that when they sell their crops, they use some of that income for maintenance and pump upkeep.

Previously, retrieving water prevented children from attending school, but the ripple effects of clean water access expand beyond bringing children into the classroom. World Vision Area Program Manager Joseph Kayafa says, “The school has seen a rise in interest for educators who want to come and teach at the school.” Joseph also believes the efforts to help Jembo gain access to clean water has improved hygiene, especially through World Vision’s handwashing promotion trainings.

Water which once hindered Jembo, now continues to transform this Zambian community.