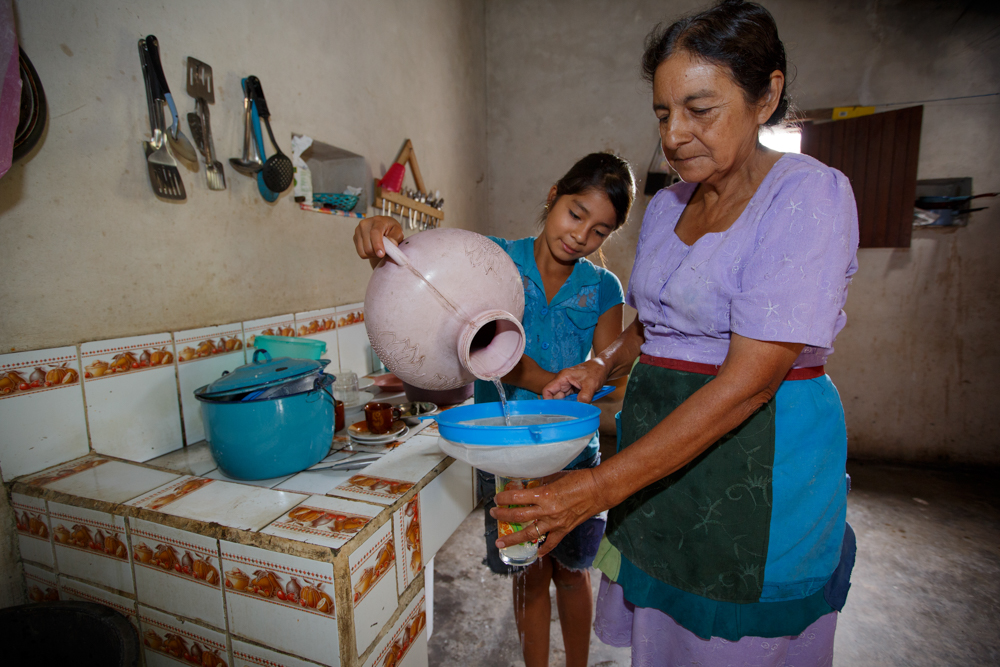 Margarita Garcia, 66, and Liliana, 11, show how they filter dirty water for cooking and drinking at their home in Llano Largo, western Honduras. World Vision is working with their community to bring access to clean water. (©2016 World Vision/photo by Chris Huber)

As we commemorate World Water Day March 22, World Vision celebrates three years early the reaching of its 2020 goal to bring clean water to one person every 10 seconds. Ultimately, we hope to provide access to clean water to every person in every community where we work around the globe.

“An accomplishment like this shows what’s possible when people of good faith and people of goodwill focus their energies on a solvable problem,” said Richard Stearns, president of World Vision U.S. “Ending the global water crisis is this generation’s ‘moon shot,’ but we’ve got what it takes to achieve it. And we can’t stop now.”

Globally more than 660 million people do not have clean water access. Nearly 1,000 children die each day because of diarrhea caused by unsafe water and poor sanitation and hygiene.

Recent research by the University of North Carolina at Chapel Hill Water Institute and Water and Sanitation for Africa found that nearly 80% of wells drilled by World Vision in the Greater Afram Plains region of Ghana are still operational after more than two decades. The study found that the World Vision community model of establishing water committees and charging a fee for water use was associated with the continued functionality of the water points.

One of the Sustainable Development Goals adopted by United Nations General Assembly is universal and equitable access to safe water by the year 2030.

As the largest nongovernmental provider of access to clean water, World Vision is on pace to reach an estimated 50 million people with clean water by then.

It happens 60 families at a time.

At 66, Margarita Garcia can no longer carry water jugs for miles on her head.

She has spent much of her life in rural western Honduras walking for hours each day to get water and wash clothes at the only water source her community can rely on year-round.

After decades of the chore, the pain in her neck is too much. So instead, she sends her granddaughter, 11-year-old Reina Liliana. It’s the only way they have water at home during the dry summer months.

But Margarita and the 60 families of Llano Largo hope in 2017 to finally bring clean water close to their homes. This will end their 23-year struggle with disease and other health issues related to dirty drinking water.

With World Vision’s help, the neighbors of Llano Largo pooled their resources last year to begin building a water catchment and pipeline system. It will bring clean water to their homes for the first time in a generation.

“I feel great because it’s been 23 years,” says Eliodoro Garcia, Margarita’s cousin and a community leader working closely with World Vision. “Knowing we will bring water from a new source, it’s a good start. My hope is that we don’t end with water; that we can start an irrigation system and be able to feed our children better.”

Between October 2015 and September 2016, World Vision helped provide more than 21,500 Hondurans with access to clean water. That came with additional efforts to rehabilitate or construct new water points, build household and school bathrooms, and equip and train community water committees to manage the systems on their own.

Margarita and her husband already installed a tap in the washing basin outside their kitchen. It’s waiting to be connected when the pipeline finally brings clean water — probably by this August.

When the water does come, Margarita wants to have a garden year-round, not just during the rainy season. Then she and Liliana can do more of one of their favorite things together — picking flowers.