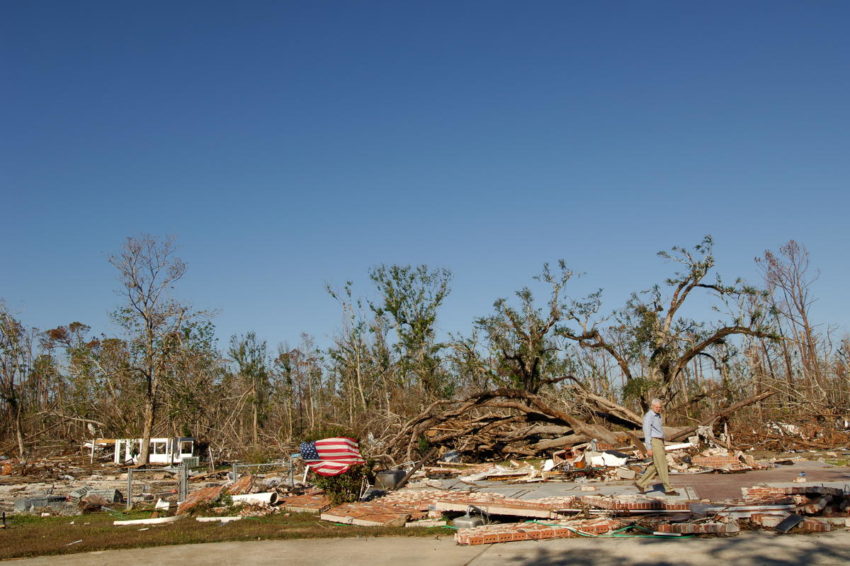 Hurricane Katrina flattened much of the coast of Louisiana and Mississippi in 2005. Rich Stearns, then-president of World Vision U.S., visited the area to comfort families impacted by the disaster and meet with church leaders whom World Vision equipped to participate in the recovery. (©2005 World Vision/photo by Jon Warren) 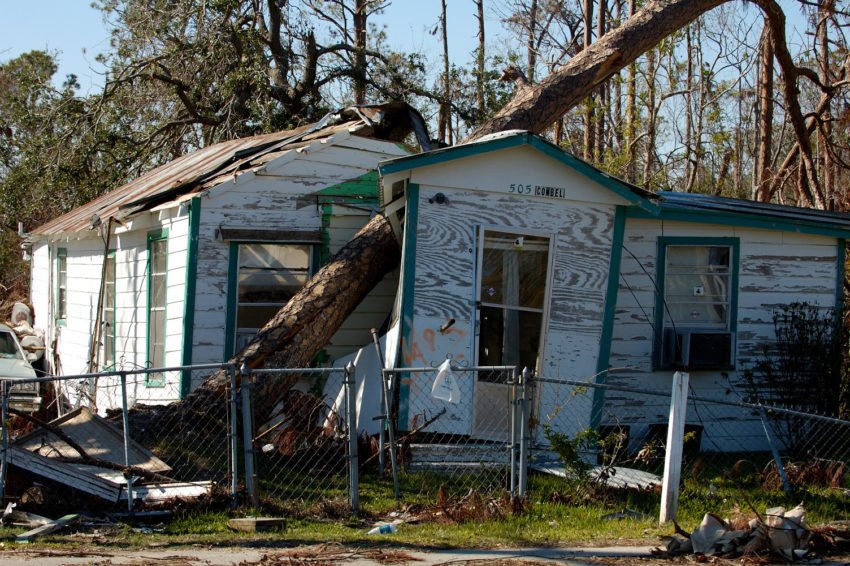 Hurricane Katrina destroyed more than 850,000 homes, including this one in Mississippi. (©2005 World Vision/photo by Jon Warren) 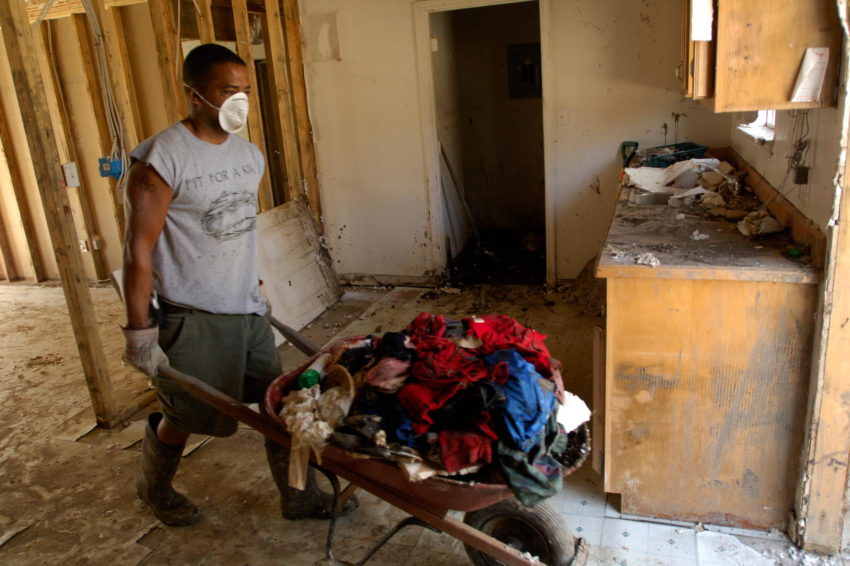 Aaron Bush gutted the inside of his house after Hurricane Katrina damaged it. His family escaped from their kitchen window and then floated on top of their RV for hours in rain and winds above 100 mph. At last, they broke into their attic, where they waited for the water to subside. (©2005 World Vision/photo by Jon Warren) 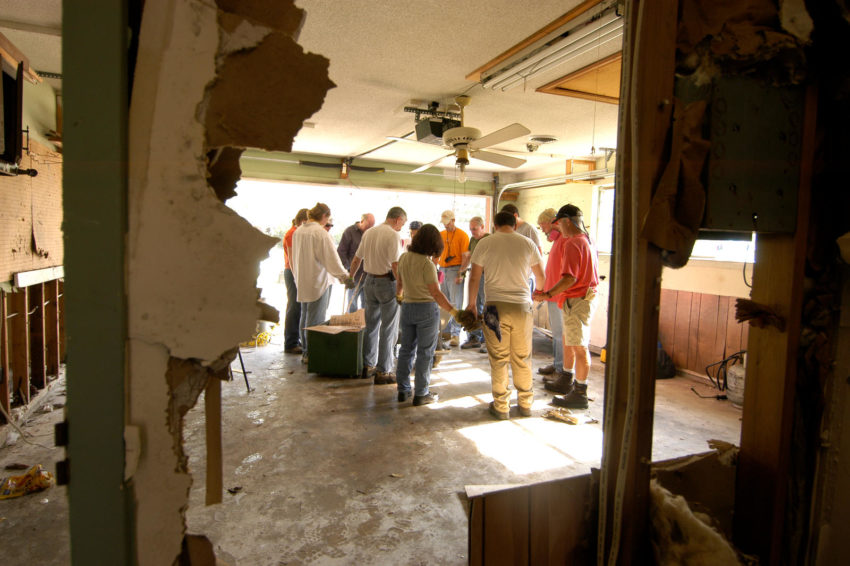 A volunteer work crew organized by a local partner church prays before working on a flood-damaged home in Ocean Springs, Mississippi. (©2005 World Vision/photo by Paul Peck) 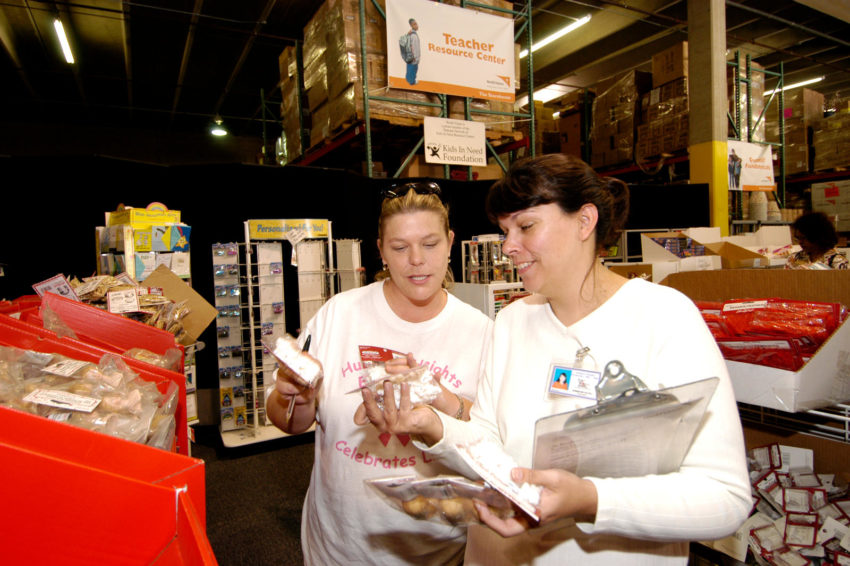 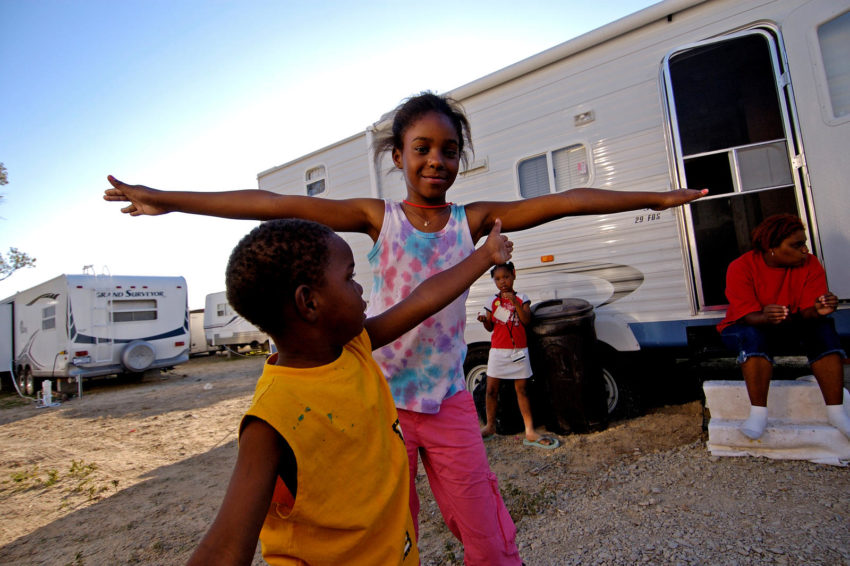 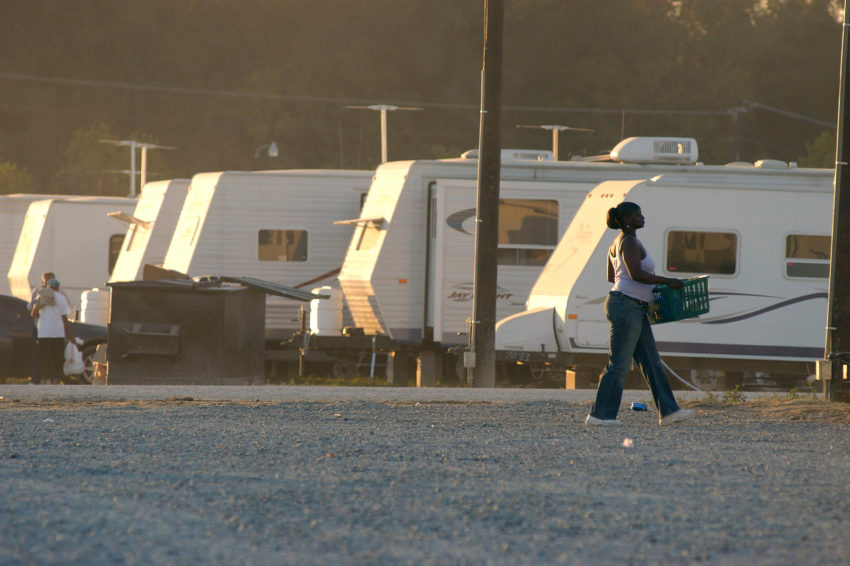 Hurricane Katrina approached the Gulf Coast as a Category 5 storm, then weakened to a Category 3 before pummeling the coasts of Mississippi and Louisiana and affecting 90,000 square miles of land. In New Orleans, breached levees flooded 80% of the city. Poor neighborhoods and people of color were most vulnerable to the storm’s damaging water and winds. People who lost jobs and lacked insurance, savings, and family resources faced a long and trying recovery.

FAQs: What you need to know about Hurricane Katrina

Explore Hurricane Katrina facts and frequently asked questions. Learn how you can help families impacted by hurricanes and other disasters in the U.S.

The tropical depression that would become Hurricane Katrina was spotted in Caribbean waters near the Bahamas on Aug. 23, 2005. Within a week as its winds circulated and gathered strength, Hurricane Katrina brought destruction to the U.S. Gulf Coast.

How did Hurricane Katrina develop?

Hurricane Katrina developed from a tropical depression, a low-pressure area with a loosely connected group of thunderstorms over the southeastern Bahamas. The tropical depression strengthened, and its circular motion became more organized until it was a tropical storm with wind speeds between 39 and 73 mph. As it approached Florida, wind speeds picked up to 74 mph and greater, making Katrina a Category 1 hurricane.

When was Hurricane Katrina, and where did it hit?

Hurricane Katrina first made landfall on Aug. 25, 2005, in Florida, weakening to a tropical storm as it briefly passed over land. It regained strength as its path turned northwest. The storm traveled the Gulf of Mexico and then made landfall on the Gulf Coast in southeast Louisiana near the town of Buras, on Aug. 29, 2005. Katrina moved north along the Louisiana coast and made landfall again later the same day at the mouth of the Pearl River at the Louisiana/Mississippi border.

What category was Hurricane Katrina?

Hurricane Katrina was an exceptionally large Category 5 hurricane as it approached the Gulf Coast. Category 5 storms have sustained winds in excess of 156 mph. Katrina’s hurricane-force winds of 160 mph extended 90 miles from the center, and tropical-storm-force winds stretched 200 miles in each direction from its center. Hurricanes are typically no more than 300 miles wide. Right before landfall, Hurricane Katrina weakened to a Category 3 hurricane with winds as strong as 125 mph.

How many deaths did it cause?

There is still some debate about the number of people killed by Hurricane Katrina. Estimates range from 1,245 to 1,833. The National Hurricane Center states that 1,833 fatalities are directly or indirectly related to Hurricane Katrina, reporting that 1,577 people died in Louisiana, 238 in Mississippi, 14 in Florida, 2 in Georgia, and 2 in Alabama. FEMA (Federal Emergency Management Agency) estimates that closer to 1,300 people died, with 1,067 people killed in Louisiana and 230 in Mississippi.

What was the damage from Hurricane Katrina?

An interesting fact is that Hurricane Katrina remains the costliest hurricane in U.S. history, causing an estimated $161 billion in damage along the U.S. Gulf Coast. It destroyed or damaged more than 850,000 homes. Between 300,000 to 350,000 vehicles were also destroyed, as well as 2,400 ships and vessels. Fifty levees and floodwalls failed, causing unprecedented flooding, most notably in New Orleans. At least 80% of New Orleans was under floodwaters on Aug. 31, two days after the hurricane hit. While New Orleans has recovered in many ways, its levee system couldn’t withstand another storm the size of Katrina.

How can I help people affected by disasters in the U.S.?

How did World Vision respond to Hurricane Katrina?

Within 48 hours of the hurricane’s landfall, World Vision was providing emergency supplies to the ravaged region.

Our response focused on Louisiana and Mississippi, where poverty rates are high, insurance coverage is low, and recovery was daunting. We also worked with families from storm-hit areas who had evacuated to Texas, distributing more than $500,000 in $1,000 grants as well as essential supplies to these newly homeless families.

Read the stories of Hurricane Katrina survivors and responders.

When disaster strikes, World Vision is there. Help us respond to disasters like Hurricane Katrina.