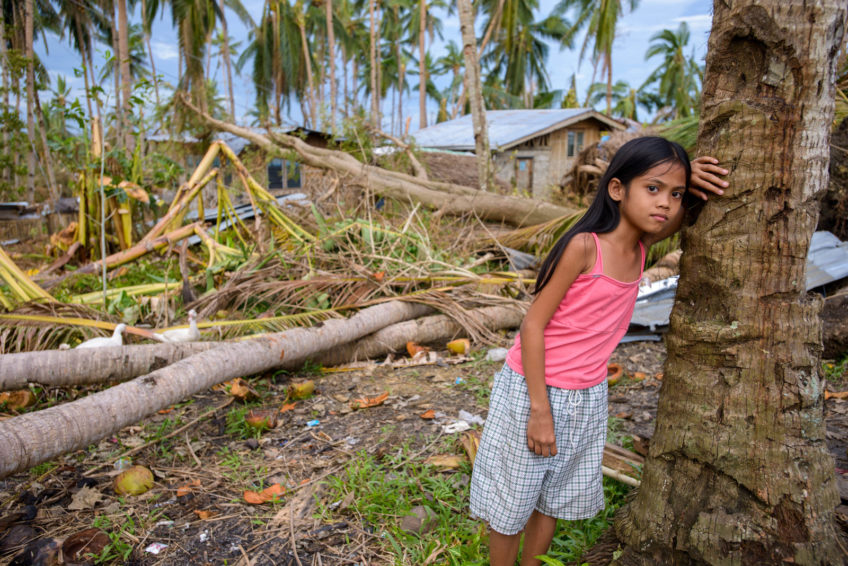 Baby Claire, 9, a sponsored child, stands near her home, which was smashed by falling coconut palm trees during Typhoon Haiyan. Her family was saved by running to a nearby community center. (©2013 World Vision/photo by Jon Warren) 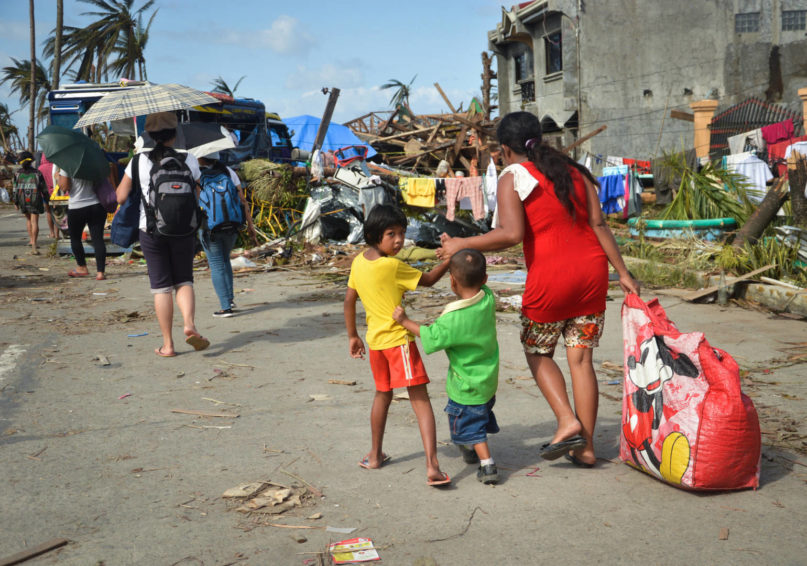 Two days after Typhoon Haiyan struck the Philippines, survivors in hard-hit Tacloban, on the northeast tip of Leyte island, looked for shelter and supplies. After a two-hour van drive and 8-hour walk to reach Tacloban, World Vision aid worker Mai Zamora described the scene as “an endless path of misery.” (©2013 World Vision/photo by Mai Zamora) 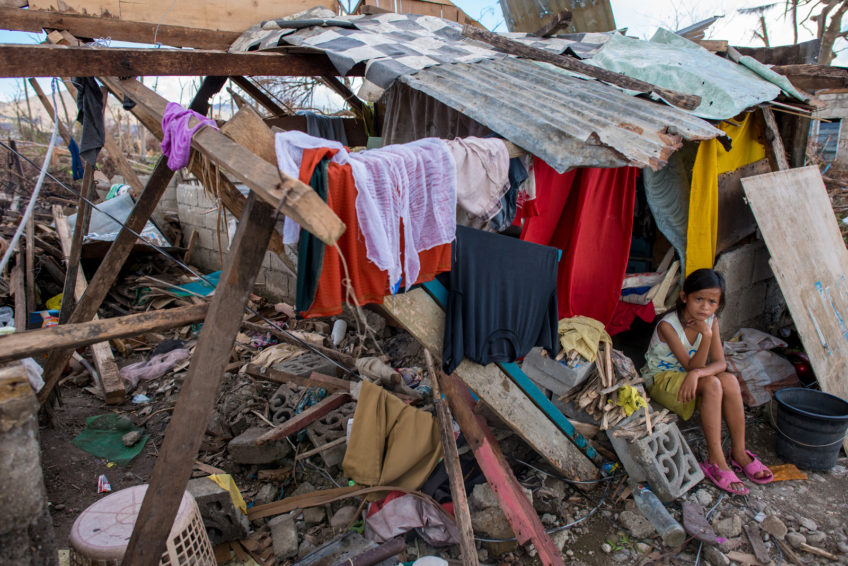 Mariel Palero, 10, sits at the front of the make-shift shelter her father built from salvaged scraps after their home was destroyed by Typhoon Haiyan in Ormoc, Leyte province. (©2013 World Vision/photo by Jon Warren) 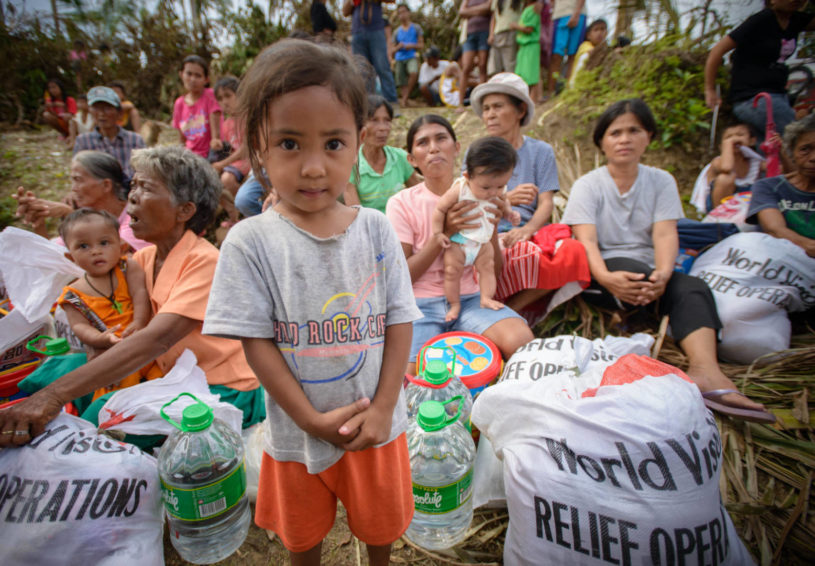 Cyrah Mae, 4, and her family lost their home on Cebu island to Typhoon Haiyan. Along with about hundreds of other families, they received emergency food, water, and sanitation supplies from World Vision soon after the typhoon. (©2013 World Vision/photo by Jon Warren) 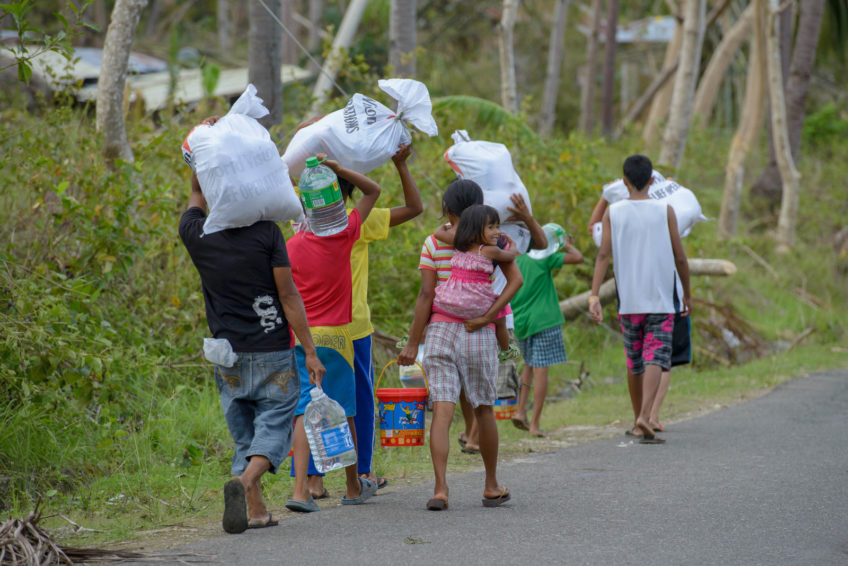 Families carry home food, water, and hygiene supplies from a World Vision relief distribution in Cebu. It was the first aid distribution to the community since the typhoon struck six days before. (©2013 World Vision/photo by Jon Warren)

Super Typhoon Haiyan, also known as Super Typhoon Yolanda, made landfall in the Philippines on Nov. 8, 2013, as a Category 5 storm. It laid waste to the Visayas group of islands, the country’s central region and home to 17 million people. Haiyan was the most powerful storm in 2013 and one of the most powerful typhoons of all time.

With wind speeds sustained at more than 150 mph, Haiyan was classified as a super typhoon. However, its massive storm surge was even more destructive. Local officials estimated that Tacloban City on the island of Leyte was 90% destroyed.

FAQs: What you need to know about Typhoon Haiyan

Explore Typhoon Haiyan facts and frequently asked questions, and learn how you can help children and families in the Philippines.

Typhoon Haiyan was called Typhoon Yolanda in the Philippines. The country’s atmospheric sciences agency gave it the name Yolanda.

What is a typhoon?

A typhoon is the same thing as a hurricane and a cyclone — the difference is in the location. Hurricanes occur in the Atlantic and Northeast Pacific. Typhoons, like Haiyan, are found in the Northwest Pacific Ocean. In the South Pacific and the Indian Ocean, the same type of storm is called a cyclone. But scientifically, they are all known as tropical cyclones.

When there’s a bit of weather disturbance, a warm tropical ocean, moisture, and a light wind — conditions may be right to produce a cyclone. By whatever name, these storms can produce violent winds and waves, torrential rains, and flooding.

Why was Typhoon Haiyan a super typhoon?

Haiyan was called a super typhoon for part of its life because of it sustained winds of more than 150 mph. Wind speed, however, is not the only factor that determines the destructiveness of storms. Don’t forget about other associated hazards like storm surge, tornadoes, and flooding.

Where did Typhoon Haiyan hit?

Typhoon Haiyan hit Palau (an island in the western Pacific) and Micronesia first. Then it made landfall in the Philippines as a Category 5 storm with wind speeds above 157 mph. After hitting the Philippines, it diminished as it moved into the South China Sea toward Vietnam, finally disintegrating into rain over Guanxi, China.

Is the Philippines a disaster-prone country?

The Philippines is one of the most disaster-prone countries in the world. The U.N.’s 2017 World Risk Index places the Philippines as the third most at risk of natural disasters among the 171 countries ranked. Vanuatu and Tonga ranked first and second.

Not only is the Philippines at risk for disastrous weather events, but it is also in a hot zone for earthquakes and tsunamis. In fact, only three weeks before Typhoon Haiyan, Bohol island was hit by a 7.2 magnitude earthquake that affected 3 million people in Bohol and Cebu, killing more than 200 people. Many families were still receiving aid and living in evacuation shelters when a second catastrophe hit them — Typhoon Haiyan.

How can I help children and families in the Philippines?

While typhoons can occur at any time of the year, the peak occurrence is in late August and early September. Typhoon Haiyan was the 13th named storm of 2013 in the Northwest Pacific Basin.

World Vision has worked in the Philippines since 1954, caring for children and building sustainable communities.

Typhoon Haiyan devastated 20 development project areas where World Vision works, including in Bohol province, which had been badly damaged by an earlier earthquake.

When Typhoon Haiyan hit, our staff were ready to respond. Even as they began to provide emergency relief, a top priority was to reach out to all of the nearly 40,000 children registered in World Vision’ sponsorship program. More than 5,600 children in Leyte and Antique provinces were sponsored by U.S. donors.

“World Vision staff came to our place to check on us. We were asked about what we went through and how we felt,” says Kim, a sponsored child who lives on Panay island. “I felt good after crying my fear out to the staff. She was the first to hear my story because I didn’t want my parents to worry about me.”