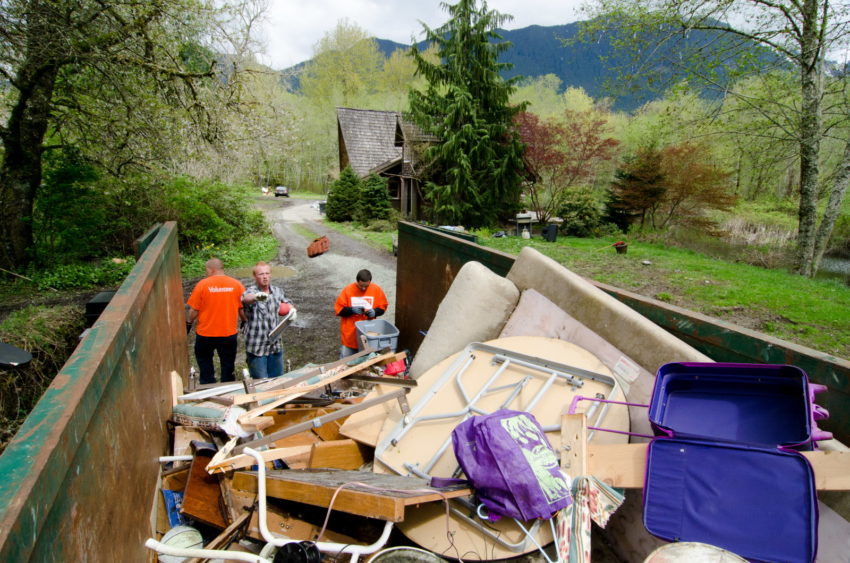 The Oso mudslide on March 22, 2014, killed 43 people and left a small community facing the monumental task of rebuilding. (©2014 World Vision/photo by Chris Huber) 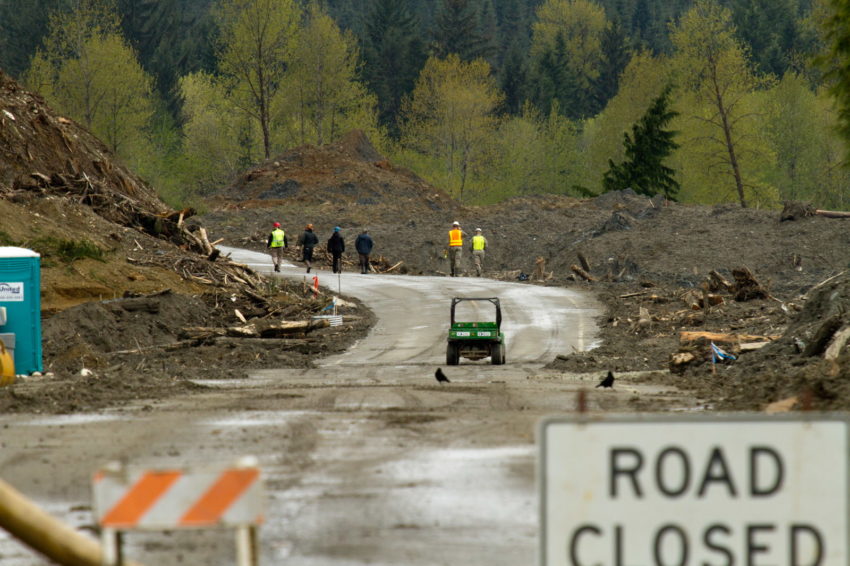 A mile-long stretch of highway was decimated by the Oso mudslide on March 22, 2014. (©2014 World Vision/photo by Chris Huber) 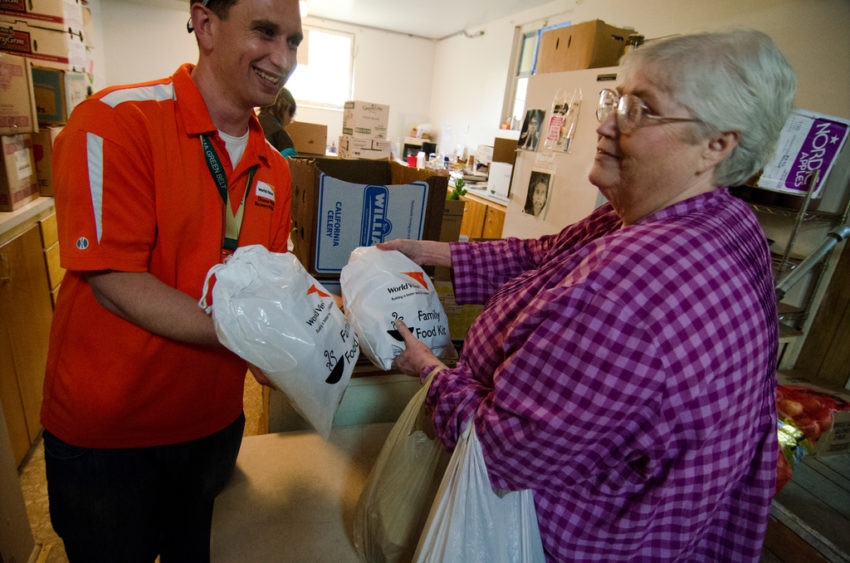 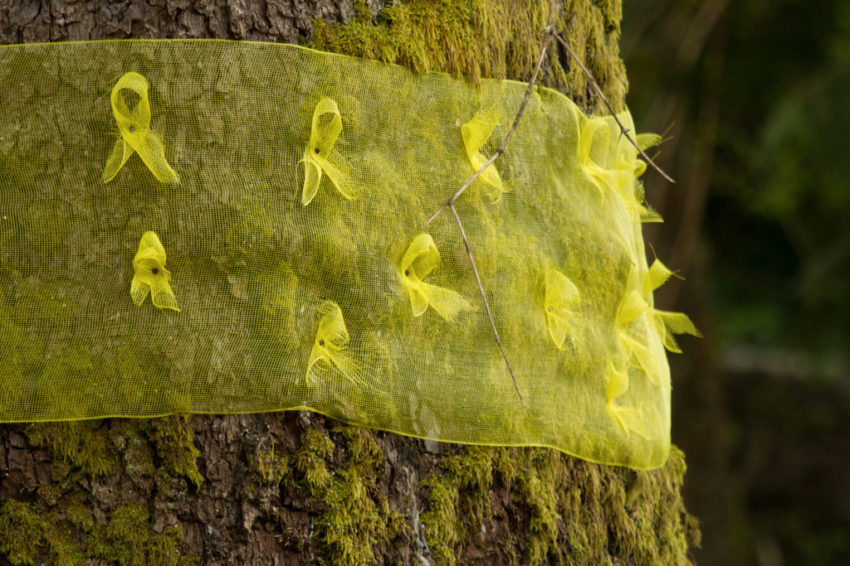 Yellow ribbons remind Darrington residents of their resilience and provide a sense of solidarity as they grieve lost loved ones. (©2014 World Vision/photo by Chris Huber) 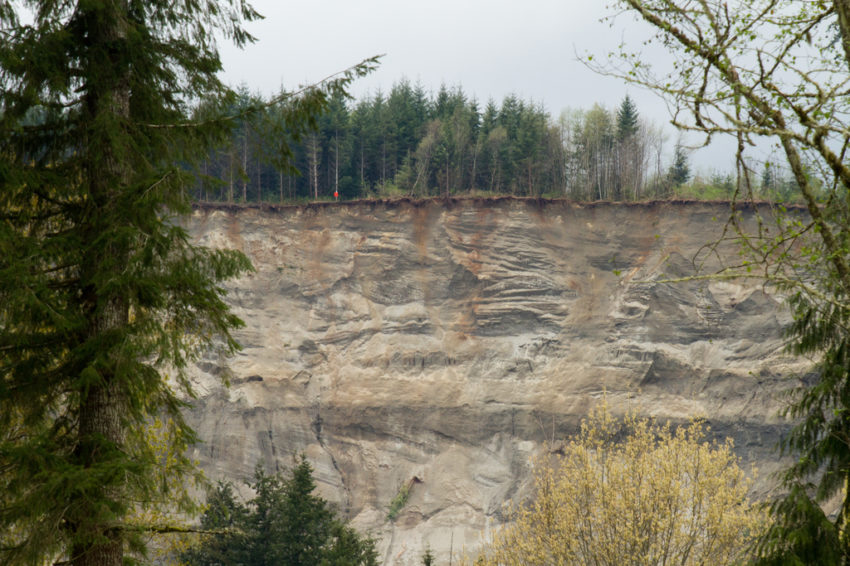 After the Oso mudslide, a new cliff remains where the mountain turned into a mudslide. (©2014 World Vision/photo by Chris Huber)

On March 22, 2014, a deadly mudslide devastated the Washington state community of Oso — 60 miles north of Seattle — with up to 70 feet of mud, swallowing part of the Stillaguamish River and a mile-long stretch of state highway 530. Eyewitnesses say a towering wall of mud roared loudly as it raced through the valley.

Forty-three people died and 10 were injured when a hillside above them collapsed, sweeping over their neighborhood as a massive mudflow. Most of the deceased were trapped in their homes. Fifty houses were damaged or destroyed.

Oso, Washington, lies in the Cascade mountain range within a narrow valley on the banks of the Stillaguamish River’s north fork, which flows west toward Puget Sound. Previous mudslides and slope erosion dating back to the 1930s likely set the stage for the catastrophic 2014 Oso mudslide.

1930s to 1950s –  Logging is the economic engine of the Oso area. Some of the logged area is sensitive to shifting because of groundwater. The North Fork of the river is losing its gradual curves, becoming more horseshoe shaped and starting to undercut the hill.

1960s – The Steelhead Haven community is established in what would become the slide area. Housing development expands through the 1980s and 1990s, despite occasional mudslides.

2006 – A 900-foot-long section of hillside collapses into the river, flooding homes.

March 22, 2014 – A massive two-stage mudslide pushes about 10 million cubic yards of dirt and debris across the Stillaguamish River, through Steelhead Haven, and over State Route 530. Search and rescue efforts begin immediately.

July 22, 2014 – A scientific report on the slide, its causes, and aftereffects notes the geological sensitivity of the area. A search crew recovers the last of the 43 bodies exactly four months after the event.

April 9, 2015 – Snohomish County and Washington State Department of Transportation are honored by the American Public Works Association for reconstruction of SR 530.

2016 – Family members and survivors reach a $60 million settlement with the state of Washington and a logging company.

2017 – A 1-mile section of Whitehorse trail reopens through the site of the 2014 mudslide. The trail follows a rail line and accommodates hikers, bikers, and horseback riders.

March 22, 2018 – Family members and friends of landslide victims announce a memorial to be built on the slide site. 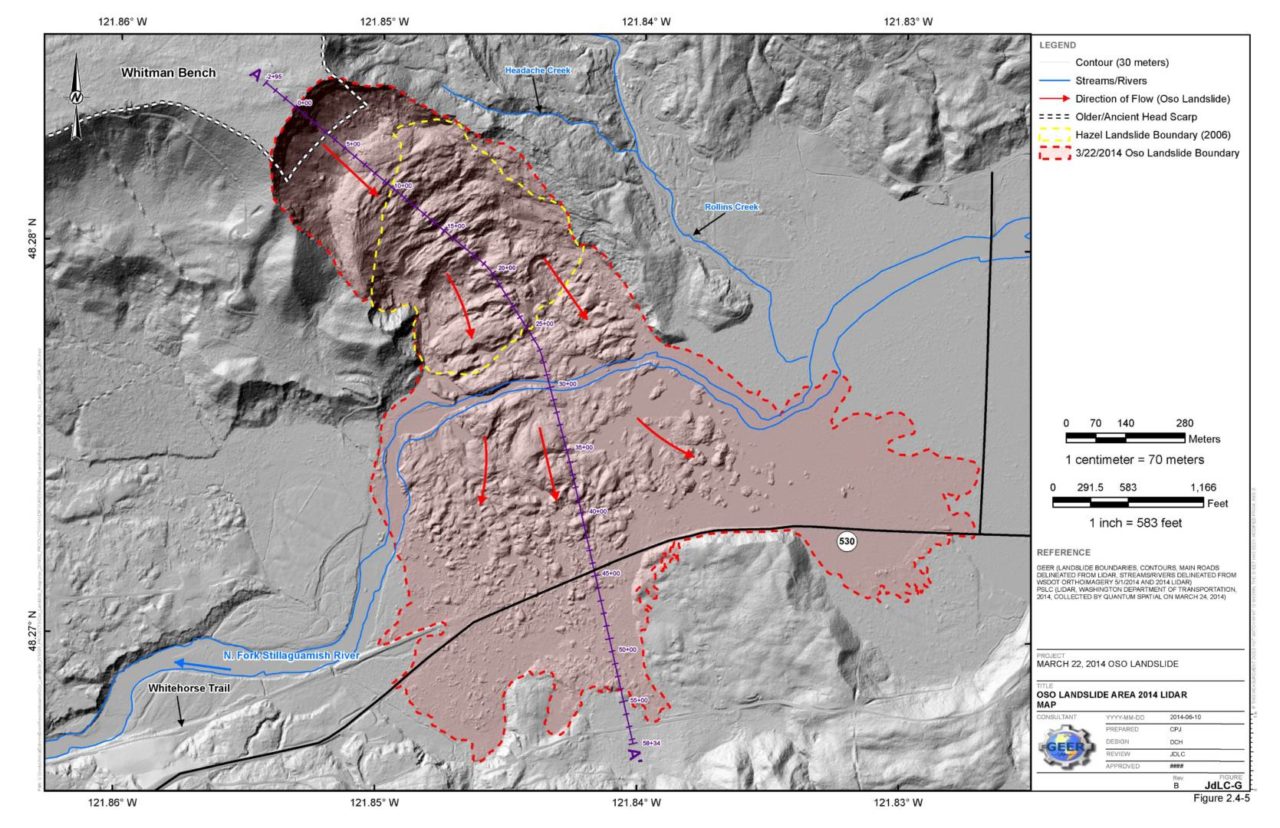 A community rallies in the wake of disaster

Pastor Gary Ray of Oso Community Chapel says almost everyone knows somebody who “really suffered” either in lives lost or property damaged by the landslide. Pastor Ray’s church became a clearinghouse for aid coming into the community immediately after the disaster.

In its heyday, Oso was a prosperous logging town. But now, “economically, this region is really in decline,” he says, with unemployment double the national average. He says being in a disaster area really hits hard for people who were already struggling.

Oso, on the west side of the landslide, got most of the attention and donations because of its accessibility to the Interstate 5 corridor north of Seattle. But east of Oso, the logging town of Darrington became landlocked when the mudslide blocked Washington State Highway 530.

Darrington’s residents — many of whom work, shop, and get healthcare in Arlington, Everett, and other cities to the west — had to take a long detour to reach work and services. This put an extra strain on families who were trying to come to grips with the disaster.

People from beyond Darrington also visited the food bank, says Coleman, a retired truck driver who did not take a day off from working at the food bank until three weeks after the Oso mudslide. Some had daily round-trip commutes of five hours or more because of road closures. “That’s a tank of gas,” he says.

Leanne Whittle was one of the new food bank customers. She had never needed it before, she says. But after the mudslide, her daily 1-hour round-trip commute to Arlington had become a 4-hour ordeal. With more money going toward gasoline, she had less money for food.

Reed Slattery, manager of World Vision’s field site in Fife, Washington, spoke to several homeowners with damaged homes on the Darrington side of the mudslide to understand their needs. He told one woman that World Vision would coordinate volunteers to help her remove rotted drywall and donors to provide building materials.

“She was overwhelmed,” says Reed. “She said, ‘I didn’t know where we were going to turn next.’ I told her, ‘We’re ready to walk with you for the long haul.’”

The focus was to provide basic supplies early on, Slattery says. Later, World Vision assisted survivors in the area with building materials as they rebuilt their lives and found new places to live.

Between October 2012 and September 2013, World Vision provided relief to nearly 80,000 people in the aftermath of six U.S. disasters, including Superstorm Sandy in New York, and the deadly tornadoes near Oklahoma City.

A prayer when danger is close

Oso is about an hour north of World Vision’s headquarters in Federal Way; that near connection is why we felt the pain of the Oso mudslide so deeply.

We take the Scripture’s advice to “weep with those who weep” (Romans 12:15) and stand with our neighbors here in Washington state and around the world that face the loss of loved ones.

We pray, “Be merciful to me, Lord, for I am in distress; my eyes grow weak with sorrow, my soul and body with grief” (Psalm 31:9).

We continue to lift all those grieving a loss before the Throne of Grace — for strength and comfort.

How you can help in times of disaster

John Iwasaki of World Vision’s staff in the U.S. contributed to this article.

When disaster strikes, World Vision is there. Help us respond to disasters like the Oso mudslide.