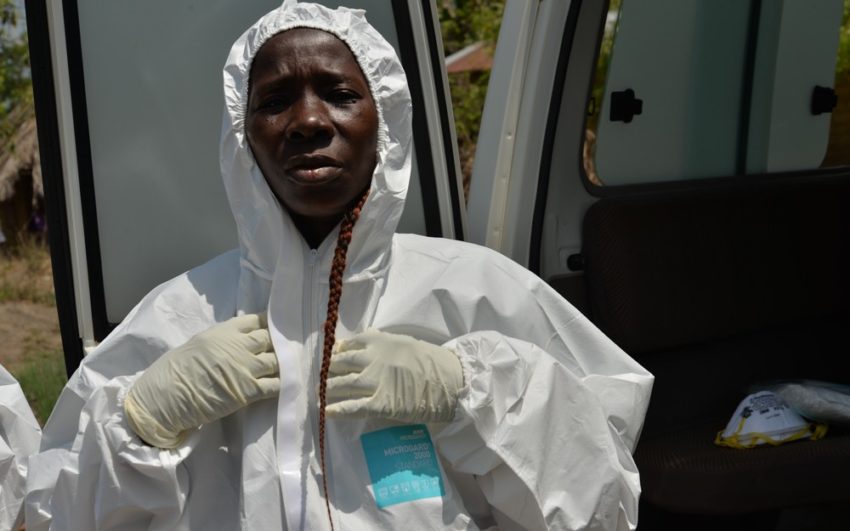 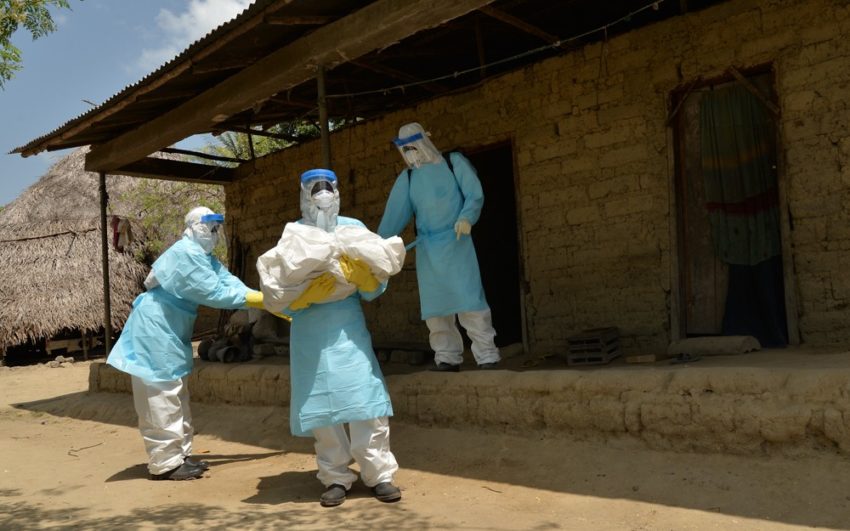 Ebola survivor Maseray carries a baby's body from a home in Bendu, Sierra Leone. Maseray is the first woman Ebola survivor to join World Vision's safe and dignified burial team there. Rather than lay the body down during the prayer and ceremony, she held the lifeless child close to her chest — providing a final moment of dignity before reaching the grave site. (©2015 World Vision/photo by Jonathan Bundu) 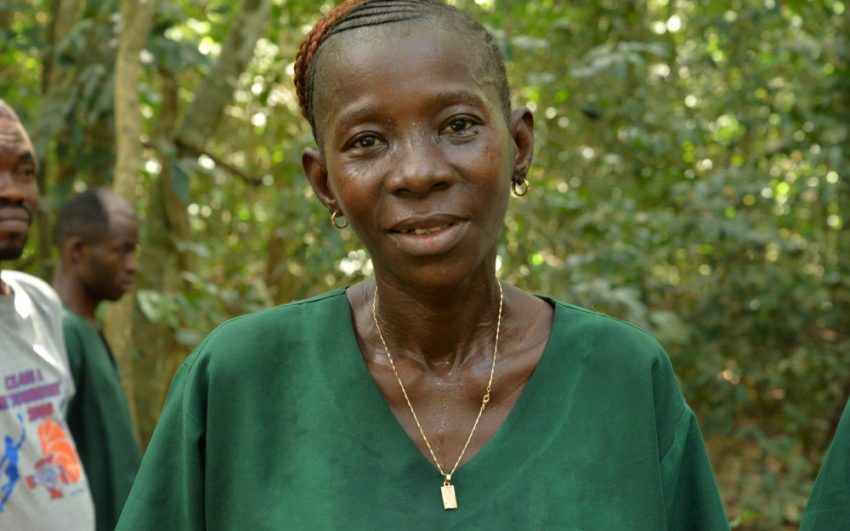 Maseray removes her protective suit after burying the baby. "It is really important for me to bury my fellow mother’s child in a safe and dignified way,” she says. (©2015 World Vision/photo by Jonathan Bundu)

I am an Ebola survivor. My husband and my sister are not. They are among the 3,900 Ebola victims who have died in Sierra Leone in the year since the epidemic began.

Life as my family knew it ended when Ebola began.

Before, I was a multi-tasking mother, grandmother, and wife. My husband, Issa, was a teacher, and I bought and sold used clothes to make money, earning about 80,000 leones (US$9) per day. Together, we raised five children in Bo, Sierra Leone’s second largest city. My daughter, Augusta, gave us two beautiful grandchildren. We did not have much, but as I realize now, we were happy.

In late May 2014, we heard rumors that a deadly disease had spread to Sierra Leone from neighboring Guinea. Many people argued that Ebola did not really exist. They believed witchcraft was killing people, not an invisible virus. Others heeded the wisdom of pastors and imams who preached about Ebola prevention. They saved many lives.

The Ebola outbreak in Sierra Leone was the perfect storm: an unprecedented epidemic colliding with a collapsed healthcare system. In those early days, even the experts were unsure how to contain it. Few people understood that Ebola is spread through contact with infected patients and that the virus stayed in bodily fluids even after death. Our sacred tradition — shared by Christians and Muslims — of washing our deceased loved ones before burial soon became an unwitting suicide mission for grieving families.

By the time the government reluctantly declared a national public health emergency, about 500 people were infected. Fear and stigma mushroomed. Police arrested suspected Ebola patients; the corpses of others lay in the streets.

Health officials organized “dead body management” teams, but often it took days for them to arrive. For Muslims who must bury their dead before sundown, this was horrific. Christians were denied their funeral rites that honor the deceased over several days. Mourners watched helplessly as overwhelmed undertakers loaded their parents, their children into trash bags and tossed them into pickup trucks, never to be seen again. “How will I live with myself if I let my mother be buried like a dog?” asked a friend. Soon people resisted the authorities — hiding the sick and burying their dead in secret.

For months my family escaped Ebola, relieved and grateful. But then my world collapsed in October when Augusta, 30, died after childbirth, leaving her 2-month-old baby girl and her son, 11, and in our care.  Could I protect them from Ebola?

Issa worked in Freetown and lived in the home of my sister, Fallay, and her family. The capital was an Ebola hot zone. I begged them to be careful. Stay inside. Wash your hands constantly. Don’t attend the funerals of even close friends.

In November, I traveled to Freetown to see my family. While there, I visited a long-time friend, who didn’t know that he was the in the early stages of Ebola. Shortly afterward, I developed a fever. I was terrified when stomach cramps and vomiting hit me. I called 117 — the national Ebola hotline — and an ambulance soon arrived. Fallay and Issa felt ill, too, but they refused to come with me to the hospital. “No one comes back from the Ebola ward,” they said. “It is a death sentence.” How I regret not convincing them to get in that ambulance.

I tested positive for Ebola. For one month and one day, I lay among the dying and the dead. The pain crippled me, and at times I almost gave up fighting the virus. I watched nurses trying to manage the mayhem. They lacked plastic gloves to care for contagious patients let alone to clean the floors slick with vomit and feces. They tossed food at us like prisoners for fear of touching the contaminated. Orderlies piled the dead in a corner, often dropping corpses on their heads. My heart especially broke for the women — naked, exposed — no one to protect their dignity in death. I vowed to God: if I leave here alive, I will do something to honor the memory of these sisters.

My heart especially broke for the women — naked, exposed — no one to protect their dignity in death. I vowed to God: if I leave here alive, I will do something to honor the memory of these sisters.—Maseray Kamara, Ebola survivor

Pumped full of fluids, I defeated the dehydration that ultimately claims many Ebola patients. I was so weak that I couldn’t walk, but finally I was released. The celebration was short-lived. Relatives broke the news to me that Issa and Fallay, as well as my aunt, Josephine, had all died of Ebola.

Widowed. Unemployed. Unemployable. Ebola survivor. My new identity. At 53, I had two grandchildren to raise, but no one would hire me. Neighbors shunned me, blaming me for spreading the disease. While I was in hospital, they burned the goods I had bought to sell in the local market. My landlord threatened to evict me.

In December, I heard that World Vision was hiring workers to conduct safe and dignified burials for Ebola victims and others. As a survivor, I am immune to the disease and faced less risk. I recalled my promise to God and to my sisters on the hospital floor. I was the first woman Ebola survivor to join the team.

Since then, I have buried more than 70 of my fellow Sierra Leoneans. My first burial was a 1-year-old baby girl. Our team enables families a chance to say a proper farewell while protecting them from disease. As 1 of 10 women on our team of 803 workers, my role is to ensure that women are treated with dignity as we dress and place the body in a protective bag. A minister or imam is present to pray, and the family walks to the gravesite with the team. It is hard for people to put aside their comforting rituals and traditions of preparing our loved ones for burial ourselves. But extreme times call for extreme measures, as our president reminds us.

Surviving Ebola is a miracle of God. As a Christian, I joined the burial team as a way of giving thanks to him. I also see this work as a service to our country in the war on Ebola. To date, the SMART consortium teams have buried more than 16,100 people with grace and dignity.

I am extremely proud that we won the Bond International Humanitarian Award. I want to say thank you to the British people for making our burial work possible through a grant from UK-aid. Amid the despair of Ebola, you walked with us. You enabled us to bury our loved ones the way you would bury your own — with dignity, respect, and honor. Recovering from Ebola will take us years. But we will find comfort on the hard path to healing knowing that we did right by our parents, our spouses, and our children in death. Thank you for your gift of grace. We are winning the war on Ebola, but it is not over yet. Please keep fighting with us.