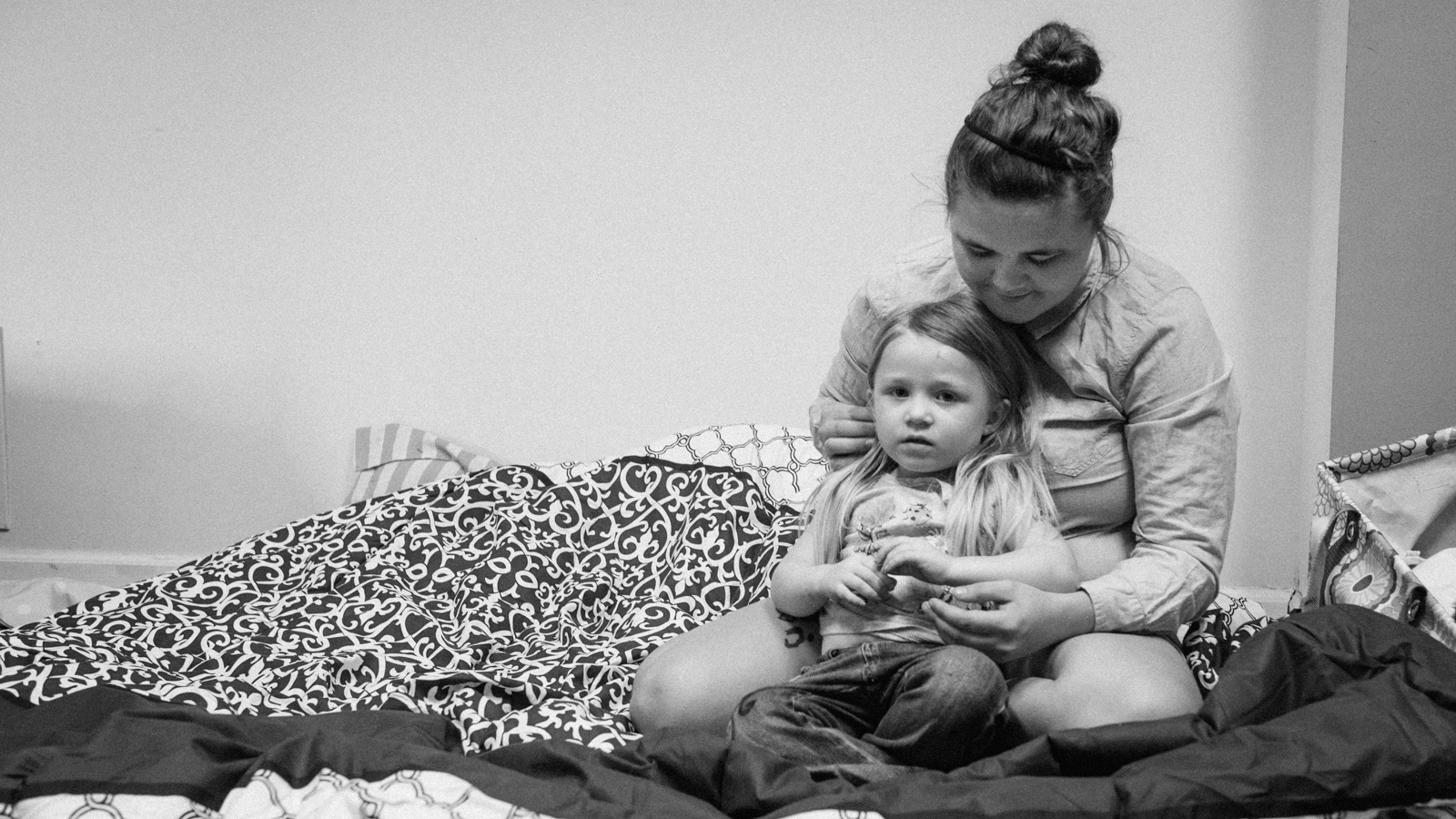 4-year-old Sophie sits on blankets on the floor with her sister Haley, 20. They had to evacuate to Valdosta, Georgia, due to Hurricane Matthew. (©2016 Laura Reinhardt/World Vision)

“I miss my bed,” says the nearly 4-year-old Sophie. She’s been sleeping in a Valdosta, Georgia, shelter since Thursday night along with 15 other members of her extended family since they fled Hurricane Matthew’s advance up the East Coast of the United States.

Sophie’s sister, Haley, says it’s the first time she’s ever evacuated for a storm — and she’s 20 years old. It’s even their father’s first time to evacuate. The coastal area of McIntosh County, Georgia, usually is spared the devastation of hurricanes. “We were in that little loop that was supposed to be safe,” says Haley.

But not this time. The church’s shelter has provided blankets, clothing, and items for the 15-person group that also includes a 5-month-old baby.

Haley and her dad put blankets and comforters down on the floor to make a soft bed for Sophie and Haley. But there’s not much padding there for the girls.

Sophie hears the adults talking, worrying, and that raises questions in her young mind. She asked an aunt in the group: “Is my house going to be okay?” Haley says that broke her.

The girls’ cousin, Virginia, says, “[Sophie] said something to me the other night that a big cloud was going to come in and tear her house down.”

Virginia had gone to work with her car packed full of things they might need and some things that had too much sentimental value to leave behind. That includes a big bag overflowing of her mother’s cookbooks. Virginia couldn’t bear to lose those to the storm. Her mother just died in July. That wound is still raw for the whole family — especially Virginia and her father.

As Virginia drove past the family’s home — the last place her mother lived — she just put her head down. “It hurt to leave,” she says. “That’s our hometown. I mean, who wants to leave their hometown?”

The evacuation drive was slow with all the family cars trying to stay together. Virginia struggled to stay awake and knows she dozed off at some point. She jolted awake with the strong sense that her mom was making the journey along with them.

The family spent that first night on the road in an abandoned parking lot before traveling on to the shelter in Valdosta, about 130 miles west of their coastal community

Waiting out the storm

For the family, there’s not much to do but wait out the storm. It’s not safe to return home yet.

On Friday, they got the first shower since they left home. “That thing felt good, didn’t it?” Virginia asked Haley.

By Saturday afternoon, word began trickling in about their home. Virginia hears that her dad’s 60-foot shrimping boat survived Hurricane Matthew’s fury but still waits to hear about her home.

A huge smile spreads across Sophie’s face as Haley tells her that she’s heard their house stood up to Matthew. Unlike thousands of others, she doesn’t have to worry about the big cloud tearing down her house, for now.

And soon she won’t have to miss her bed anymore.

Help provide hurricane relief to children and families in the U.S.