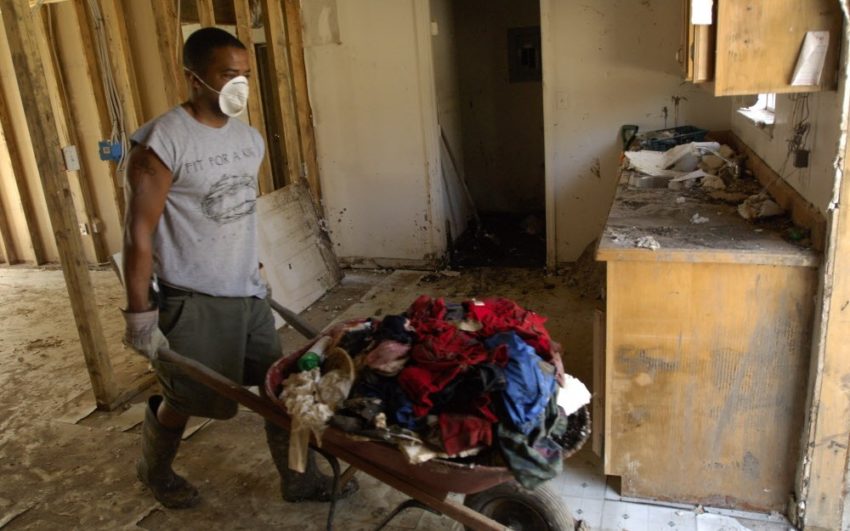 After Hurricane Katrina struck, the Bush family of Waveland, Mississippi, had to completely gut the inside of their home because of water damage and mold. They hauled everything out and piled it up on the roadside. (©2006 World Vision/photo by Robert Coronado)

Ten years ago, Hurricane Katrina devastated the Gulf Coast and submerged most of New Orleans. World Vision responded by opening a temporary 43,000-square-foot warehouse in Picayune, Mississippi, to distribute food, hygiene kits, building materials, and other supplies. Working with nearly 100 church and community partners, World Vision distributed more than $9 million in goods to more than 318,000 survivors in the Gulf region. In addition, we distributed more than $1.5 million in grants to help churches and families get back on their feet. Read the stories of Hurricane Katrina survivors and responders.

By her own admission, Suzette Arbuthnot’s life was “a mess” a decade ago. The New Orleans-area woman had separated from her husband and was headed toward a divorce. She moved in with her sister, served as a single parent to her 7-year-old daughter, Maya, and was “just trying to get my life back together.”

It was about to get worse.

“Katrina came and uprooted me from my temporary home with my sister,” Arbuthnot recalls as the anniversary of the deadly hurricane approaches. “I can’t believe it’s been 10 years. You remember it like it was yesterday.”

Working with local partners, World Vision responded to Hurricane Katrina with truckloads of disaster relief supplies, building materials, and offers of cash grants in Louisiana and Mississippi, including to Hosanna Fellowship Church in Gretna, Louisiana.

“We got clothing, food, water — everything you were in need of, they had it on that truck,” says Arbuthnot, who helped Hosanna Fellowship distribute supplies. “It was such a blessing because everything had closed down. Day to day, I didn’t know what was going on. It gave me hope. Somebody cared about us in New Orleans.”

Alex Bellow, Arbuthnot’s pastor, had started an insurance agency in the New Orleans area in early July 2005 as a second job.

Just 59 days later, Hurricane Katrina slammed into the Gulf Coast. Most of his congregation lived in the Lower Ninth Ward of New Orleans, the neighborhood synonymous with the storm’s worst devastation.

“It was ground zero,” Bellow recalls.

With their homes submerged, most of Hosanna Fellowship’s members moved away as far as Georgia. Bellow remained, though no one was interested in buying insurance.

“Everybody was trying to rebuild their homes and lives,” he says.

World Vision in it for the long-haul

World Vision offered cash grants to pastors and families to help them pay rent, utility bills, medical expenses, and related costs. The organization asked Bellow to serve on a local board with pastors, executive directors, and community members to review applications and approve grants.

“World Vision was amazing,” Bellow says. “We looked for churches to become a blessing to — to rebuild not only their church but the homes of people in the community.”

The organization helped strengthen and equip the church and local partners with tangible resources like educational materials, cleaning supplies, clothing, shoes, and building materials, as well as technical support and training.

Without World Vision’s help, “it would have been really, really tough,” says Arbuthnot, a hospital worker who recently remarried and whose daughter is now a community college student. “People would have been losing hope.”

“Many of the pastors lost their income, homes, and church,” says Phyllis Freeman, national director of disaster response for World Vision’s U.S. Programs. “A cash grant might have included expenses for the pastor, because without that pastor, [the community] couldn’t get the church back up.”

Once churches were re-established over the years, World Vision equipped them and their communities to be better prepared for future disasters.

“We have some fantastic partners,” Freeman says.

Bellow and other local leaders have teamed up with World Vision to plan disaster-preparedness training for church and community leaders, helping them create response systems and volunteer networks.

“Communities have definitely improved and changed because had World Vision not been there, it would have been worse,” says Pauline Rogers, whose organization, Reaching and Education for Community Hope Foundation,  partners with World Vision. “This is not creating a welfare system but remembering and paying attention to real needs. World Vision was listening. They took notes and paid attention.”

“A lot of organizations said they would help, but nobody came through like World Vision,” Powell said in 2010 on the fifth anniversary of Katrina. “They hit the ground running. Without World Vision, we would not have made it. They were the hands and feet of Jesus.”

A new precedent for disaster response

“It shows the continuum of relationship,” Freeman says.

It’s one that partners embrace.

“Ten years ago, it was the Christian and nonprofit community that put us back on our feet,” Bellow says. “We were overwhelmed. We had never seen anything like this. … They said, ‘We’re not thinking about red tape. We’re going to come into the community and help these people.’

“World Vision serves with compassion, integrity, and understanding. They are coming into people’s lives at the most devastating time with such love and compassion that I want to be part of it.”

The story of people struggling to bounce back after Hurricane Katrina

Pauline Rogers can’t bring herself to throw out the notebook filled with names and phone numbers she collected in Hurricane Katrina’s aftermath.

She doesn’t know why.

From New Orleans to Jackson, Mississippi, Pauline and her husband spent years helping families and church communities recover from the devastating effects of Hurricane Katrina. Their organization, the Reaching and Educating for Community Hope Foundation, worked with World Vision to provide relief and recovery in the months following the disaster. The partnership continues today, 10 years later.

Something about the names and notes in that book tells Pauline not to let go.

“A lot of people have not bounced back yet,” Pauline says.

Occasionally, she says, she opens the pages, picks out a few names, and sends an encouraging note to each one.

“I pray for the people,” she says. “Maybe my emotions are damaged to the point I don’t know they’re damaged, but I find myself not being able to toss it.”

As the country commemorates 10 years since Hurricane Katrina hit and reflects on the stories of the disaster, Pauline remembers her disaster experiences growing up and the journey through the aftermath of the late-August 2005 storm that changed lives and communities forever.

The oldest of 11 children, Pauline grew up on Mississippi’s Gulf Coast. Her large extended family and the surrounding community had to depend on each other to ride out and rebound from the storms that came through regularly.

She was 13 when Hurricane Camille — even more powerful than Katrina — hit in 1969.

“That was the pivotal one that got me on the mark that I would always be involved [in disaster relief)],” she says. In Camille, “the damage was worse [than normal], recovery took longer, we were without light longer, and we had to take care of our neighbors longer. We had to be more strategic in how we survived.”

She and her husband, who now live in Jackson, Mississippi, started the Reaching and Educating for Community Hope Foundation to do just that. And after Katrina, the need was everywhere.

Within a couple of months of the storm, the Reaching and Educating for Community Hope Foundation partnered with World Vision and local churches to help families recover and rebuild.

“World Vision supplied goods and resources — we could not have done without them: shingles, tubs, sinks, shovels, rakes, personal hygiene items,” Pauline says. “No way could we have purchased these items. It kept us afloat to enable us to help others.”

“Communities have definitely improved and changed, because, had World Vision not been there, it would have been worse,” Pauline says.

John Iwasaki of World Vision’s U.S. staff contributed to this article about the stories of Hurricane Katrina survivors and responders.