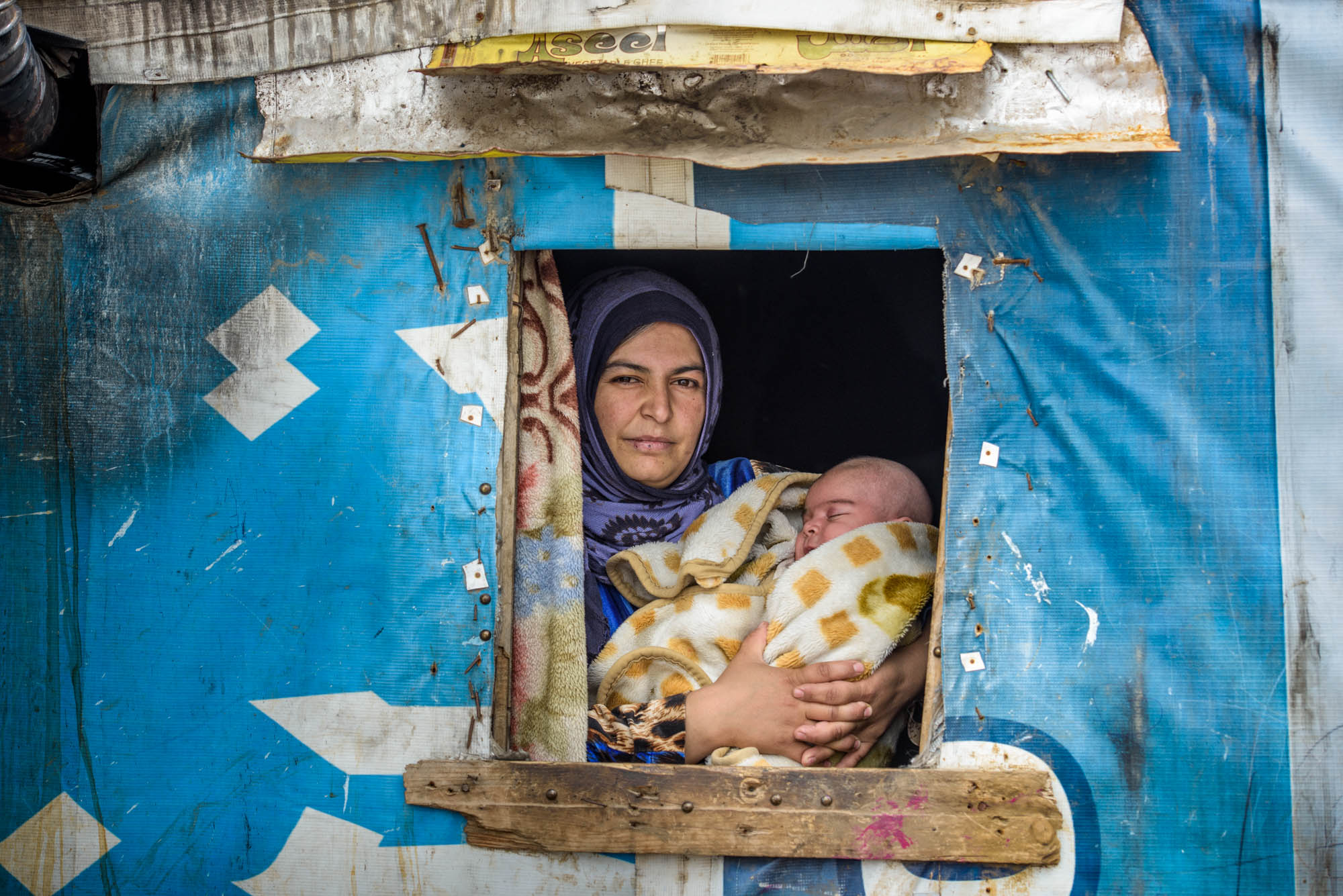 This mom, Heven, tries to watch out for her other children while she cares for baby Hasan. He is less than 2 months old. (©2016 World Vision/photo by Jon Warren)

Here’s a recap of eight major humanitarian crises we were tracking in 2015.

The more than 4-year-old civil war in Syria has caused 4.4 million people to flee the country as refugees. Half of them are children.

Within the country, the violence has displaced many more people. Education, family, and community life are disrupted. The refugee crisis has also spilled into Europe.

Child refugees are particularly vulnerable to exploitation and disease. Living conditions are difficult in a refugee camp or host neighborhood with little infrastructure, or within the country, where fighting continues.

There appears to be no end to the conflict and displacement in sight.

The U.N. appealed for $7.4 billion to meet humanitarian needs for the Syria crisis. About half of the funding has been received.

A magnitude-7.8 earthquake struck Nepal on April 25, toppling buildings and triggering avalanches in the Himalayas.

Some 8 million people are affected by the quake and the aftermath. More than 8,000 lives were lost.

Aid agencies and affected communities are turning their efforts toward building back better.

Fighting has spilled over from Syria and flared up internally.

Many are dependent on aid for adequate food, shelter, clean water, sanitation services, and education support.

The 2014 Ebola outbreak that hit West Africa was the worst since the disease was discovered in 1975.

In November 2015, Sierra Leone was declared Ebola-free after 42 days with no new cases. Guinea and Liberia had already achieved Ebola-free status.

A global effort was necessary to treat the sick and prevent the virus from spreading. In Sierra Leone, World Vision provided Ebola prevention programs, safe and decent burials, and other aid to families and children.

We’re is also helping families to rebuild their livelihoods and recover.

Since conflict broke out in December 2013, 1.66 million people have fled their homes because of fighting.

Many set up camp under the U.N.’s protection, dependent on aid from relief agencies. Their lives and prospects are limited. Another 640,000 South Sudanese are refugees in neighboring countries.

Thousands of farming families missed the planting season or lost their livestock and now have no crops or income to hold them over until the next harvest. Hunger, malnutrition, and disease threaten their children’s lives. Schools are occupied by armed forces and displaced families, not students.

Ongoing armed conflict and political insecurity have hindered efforts to help hungry families become more resilient to food shortages. However, some communities ravaged by the 2012 drought continue to make progress toward having enough to eat during lean times.

Late in 2015, about 90,000 people in Somalia were displaced by flooding attributed to the effects of El Nino.

In October, the U.N. reported that 3.5 million people had been affected in Guatemala, Honduras, and El Salvador, and more than 2 million needed immediate food assistance, health care, livelihood support. The number is expected to increase by early 2016.

The situation in CAR remains volatile as clashing groups continue violent attacks throughout the country of 4.6 million people.

Conflict has displaced nearly 450,000 people from their homes. Schools have closed, making children vulnerable to abuse and violence, including recruitment into the warring factions.

Now, millions of people need immediate help such as protection, food, and access to health services. Chronic malnutrition rates, among the highest in the world, have worsened during the conflict.

Help World Vision respond to more than 80 disasters each year.