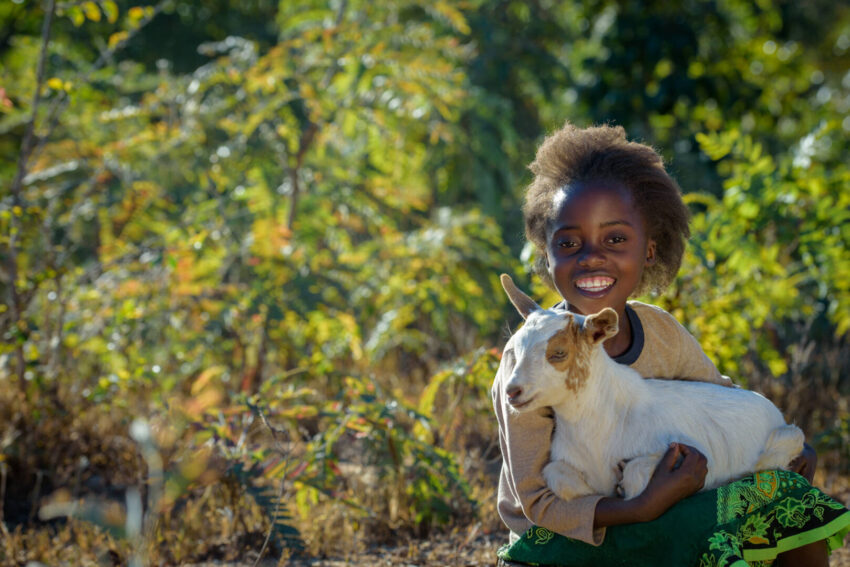 Goats have helped created a better life for 7-year-old Loveness and her family. Editor's note: Story and photos were gathered prior to the COVID-19 pandemic. (©2019 World Vision/photo by Laura Reinhardt)

It’s lunchtime in Moyo, Zambia, a time when family members and neighbors gather under the thatched roof of an open-sided kitchen to eat and talk about their day.

Sitting on low, wooden stools, Better, 9, and his sisters, 7-year-old Loveness and 4-year-old Hannah, dig into plates of nshima, a corn-flour porridge, and mundyoli, a green stew made of pounded peanuts and dried pumpkin leaves.

The kids chatter and reach for more food as their conversation turns to a favorite subject — goats. Small, agile, soft, and inclined to mischief — as they describe them — goats are endlessly fascinating to the children. Their mom, Patricia, and their dad, Eliot, listen and occasionally comment.

“Ma-a-a-a,” says Better, mimicking Mazuba, the mother goat who gives lots of milk. Shyly, Loveness chimes in with a “ba-a-a,” the high and pleading call a baby goat makes when looking for his mother. Patricia laughs and says she likes to hear the goats because “it sounds like money to me.” She spends a lot of time planning how to make the most of the family’s assets to put healthy food on their plates.

“I’m always thinking about how to get money for next week’s food,” says Patricia. She calculates the likely harvest from the fields where they plant corn and peanuts, the price she can get for a bunch of greens from her garden plot on the riverbank, and the best time to take a loan from her savings group so she can buy bananas and other produce to sell for a profit. After two years of drought, she’s gotten used to juggling like this to keep the family finances on track.

But Patricia and Eliot have high hopes. They see their growing goat herd as the underwriters of their future financial security.

“A year ago, we had two goats,” says Eliot. They weren’t much more than extra mouths to feed. “Then World Vision gave us five more.” With four young female goats and a male “super goat,” Eliot could see his family’s financial prospects improving. Soon the family’s goat herd numbered 11. Eliot and Patricia realized that with a few more goats, they would have a big enough herd to sell some of the larger ones each year. Just one of those goats could bring in enough money to pay a child’s annual school fees.

Like Eliot and Patricia, most Zambian farmers depend on maize and other annual rainfed crops for their diet and income. But years of drought have made it impossible for many families to continue to depend on a once-a-year crop.

Small-scale farmers in Africa have always raised a few goats, but it took agricultural economists and climate scientists to realize that more goats, better goats, and better goat husbandry could make the difference between success and failure. Goats can be the sustainable income source they need.

To Eliot, goats are “problem solvers.” They basically take care of themselves, reproduce quickly, and seldom get sick. If you need some quick money, he says, they are much easier to sell than cows.

Cattle used to be the main sign of wealth, and there’s still a certain prestige to owning them. “But nowadays, it’s worth more to own a herd of goats,” Eliot says.

“It’s not hard to keep goats, and it’s good to have them around your house,” Better says. He knows each goat’s name and character — which ones will follow him right away and which ones stray. Each morning, he opens the door of their raised pen and leads the big goats out to graze. When he comes home from school, he rounds up the adult goats and reunites them with the babies. He looks them all over carefully and makes sure each one gets a drink when he pours water for them from a jerrycan into two pans.

Better may be a good goat herder, but he’s an even better student. Both he and Loveness attend a community school that’s a short walk from home. Community schools are solely funded by fees paid by students’ parents. Loveness and Better are World Vision sponsored children, and it’s through World Vision’s community development work that parents in Moyo have become committed to schooling, Patricia says. “We want our children to be educated; that’s the main thing,” she says.

As the children continue their schooling, goats will likely be paying their way as well as opening up new opportunities for their parents. As Eliot says, “You can never go wrong with goats.”

Editor’s note: The above story and photos were gathered before the COVID-19 pandemic began. Learn more below about how children and families in Moyo are faring now.

After we met them, Better’s family received five more goats from World Vision, and those goats delivered babies. Now there’s plenty of milk to drink and the goat herd is big enough to provide the financial stability that Better’s father, Eliot, has long sought. The 2019 to 2020 rainy season also brought plentiful rainfall that was an answer to prayer. Better’s family harvested maize, peanuts, and vegetable crops — food for many months. The goats have provided greater stability during the COVID-19 pandemic.

Better’s and Loveness’ school closed in March 2020 because of COVID-19, but they hope to return to classes soon. In the meantime, parents and community members are fulfilling their promise to finish the school buildings. They’ve hauled bricks, sand, and other materials to the site and put a roof on one of the two classrooms. 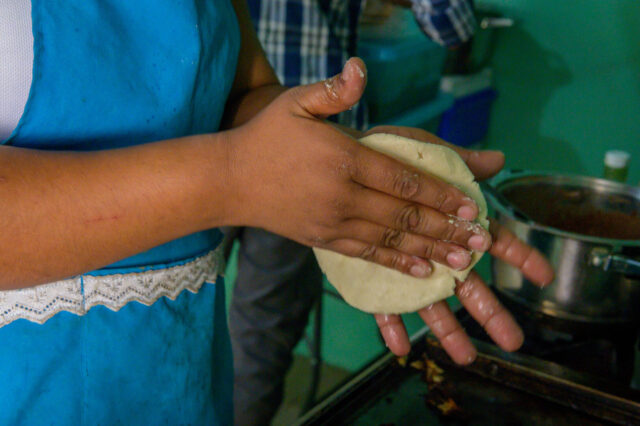 In the Kitchen: Honduran pupusas 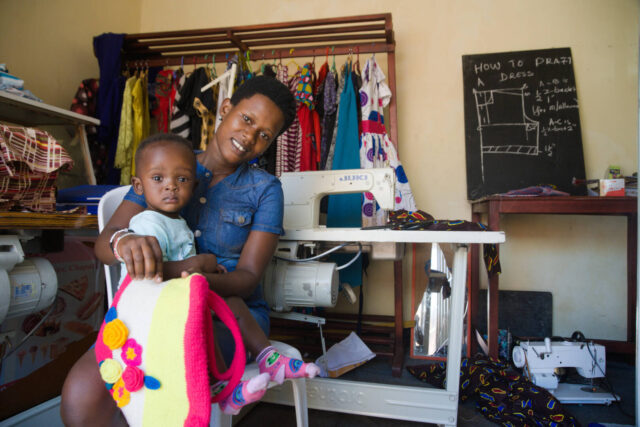