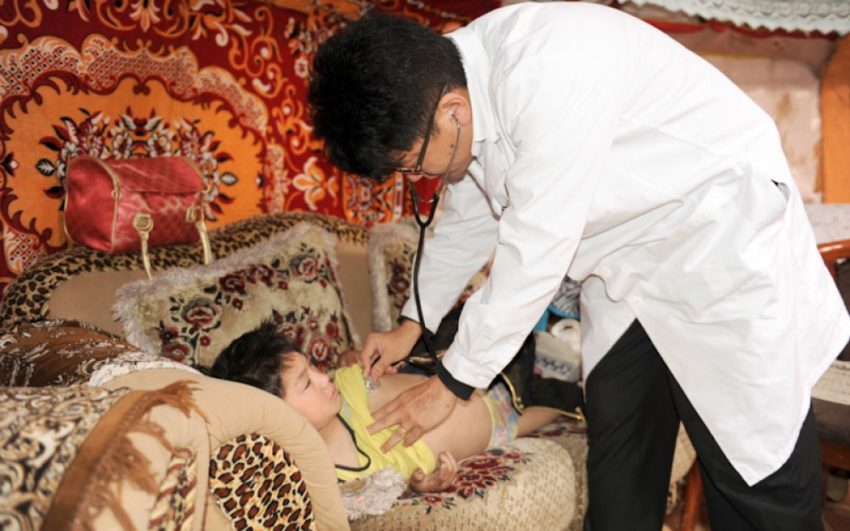 World Vision mobile clinic doctor Batjargal Ulzii examines 9-year-old Asar. The boy has bone cancer and had some of his leg bones removed. Doctors with the mobile clinic stop by to check on him often, says Asar's grandmother Norov Mangal. (©2013 World Vision/photo by Enkhbold Byamajav)

In a yurt settlement on the outskirts of Ulaanbaatar, Mongolia’s capital city, 9-year-old Asar is finally getting treatment for issues related to bone cancer.

Without a birth certificate, he does not exist in the eyes of the government. Like millions of children worldwide, Asar misses out on medical and other services routinely provided to children who are in the system.

Doctors in World Vision’s mobile clinic diagnose vulnerable and unregistered children like Asar, treating them or referring them to local family clinics. They also inform the local government about unregistered children in the area. It’s a first step toward getting them proof of identification, which will allow them to attend school.

“The main importance is that we take care of unregistered children,” says Dr. Batjargal Ulzii as he examines Asar.

Asar’s situation is a look into a growing problem worldwide: the widening gap between people who have good healthcare and others who don’t.

It’s a horrifying reality that in today’s world — when we have the knowledge, resources, and tools to provide everyone with quality maternal, newborn, and child health — we still fall so short.—Lisa O’Shea, World Vision campaign director for Child Health Now

Mongolia’s gap is narrower than two-thirds of the 176 countries reviewed in a new World Vision study; it ranks 56. But the United States ranks 46. That means it’s easier to get adequate medical care in Libya (21), Bosnia (36), or Romania (25) than in the U.S.

“The fact that the U.S. is ranked lower than many lower-income countries on the index proves that a country’s wealth does not guarantee its people access to good healthcare and quality health,” said Lisa O’Shea, World Vision’s campaign director for Child Health Now. “It’s a horrifying reality that in today’s world — when we have the knowledge, resources, and tools to provide everyone with quality maternal, newborn, and child health — we still fall so short.”

In settlements like Asar’s, high poverty rates coupled with poor hygiene and lack of food cause myriad health problems. Children are especially vulnerable and suffer from a lack of vaccinations. Unregistered children often can’t pay even nominal fees for treatment and lack insurance to cover costs.

“It’s been six months since the mobile clinic started checking up on him,” says Asar’s grandmother. “He’s getting better. If things aren’t clear, they take him to a hospital, do X-rays and other exams, and bring him back and tell us exactly what we should do. I wouldn’t get medical service any other way.”

The 10 countries with the most narrow gap between health-rich and health-poor people:

The 10 countries with the widest gap between health-rich and health-poor people:

Read the full report, “The Killer Gap: A Global Index of Health Inequality for Children.”

Xenia Davis of World Vision’s staff in Mongolia contributed to this article.