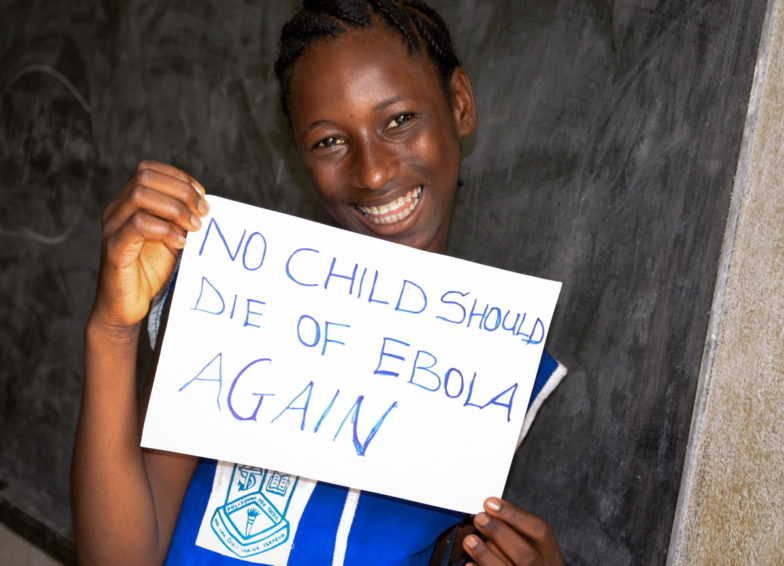 Like thousands of other children in West Africa, 13-year-old Aminata from Sierra Leone was orphaned by the deadliest Ebola outbreak in history. She holds a sign that says, "No child should die of Ebola again." (©2014 World Vision/photo by Sahr Ngaujah)

A World Vision health worker demonstrates the proper way to wear personal protective equipment before assisting with a safe and dignified burial in Moyamba. (©2014 World Vision/photo by Bruno Col)

Community members and loved ones mourn the death of a woman who died from Ebola as a pastor reads scripture and performs a ceremony to bring closure for the family. A World Vision-trained team conducted the burial, one of thousands World Vision teams performed nationwide in the first year of the Ebola outbreak response. (©2014 World Vision/photo by Jonathan Bundu) 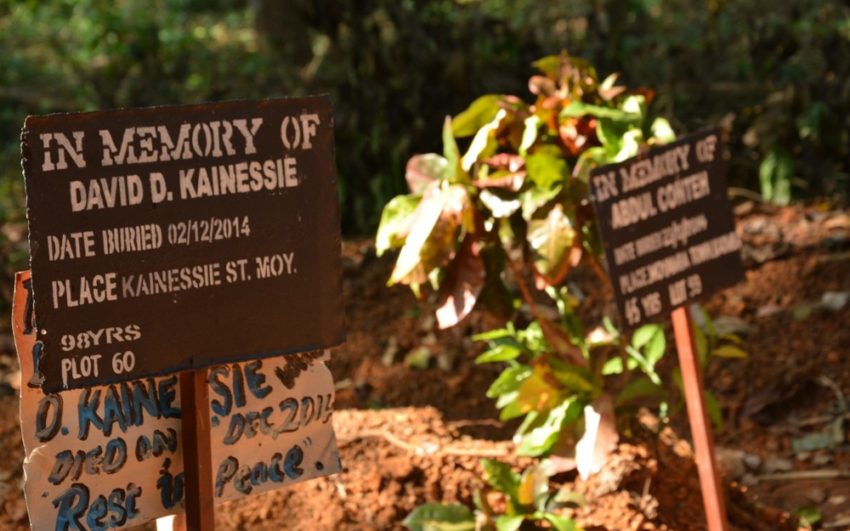 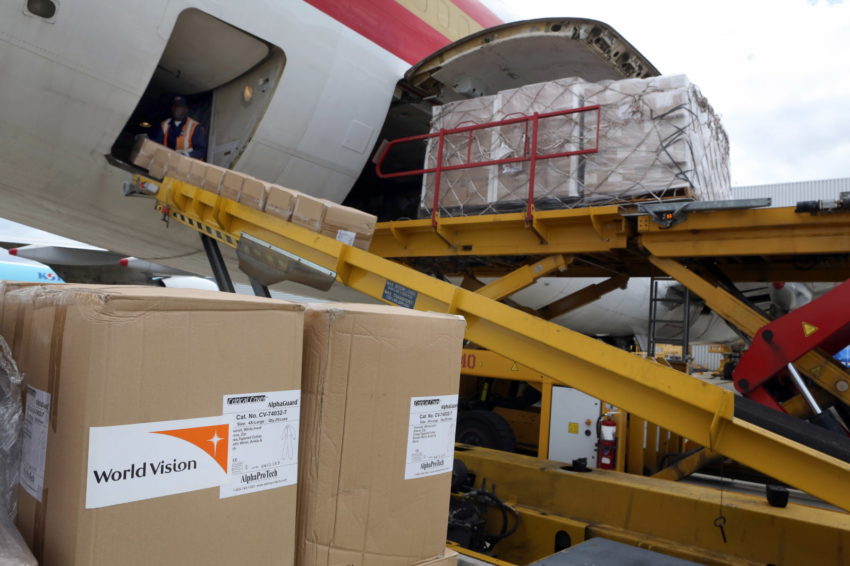 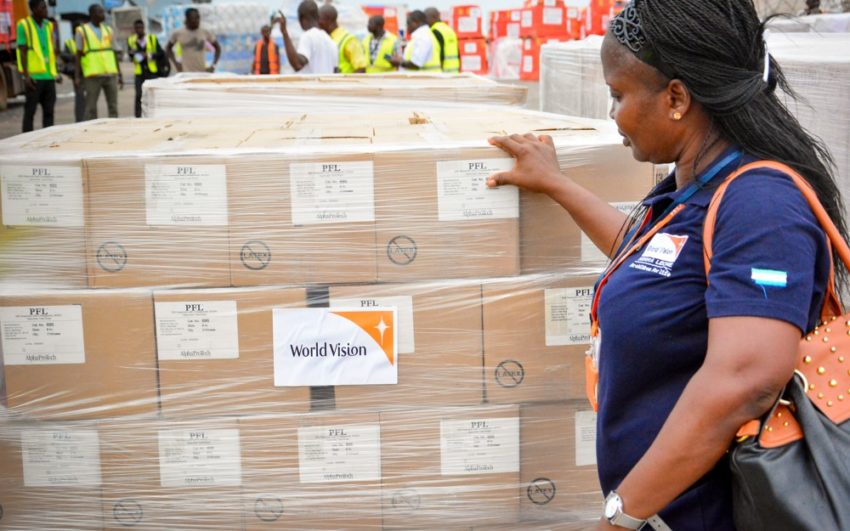 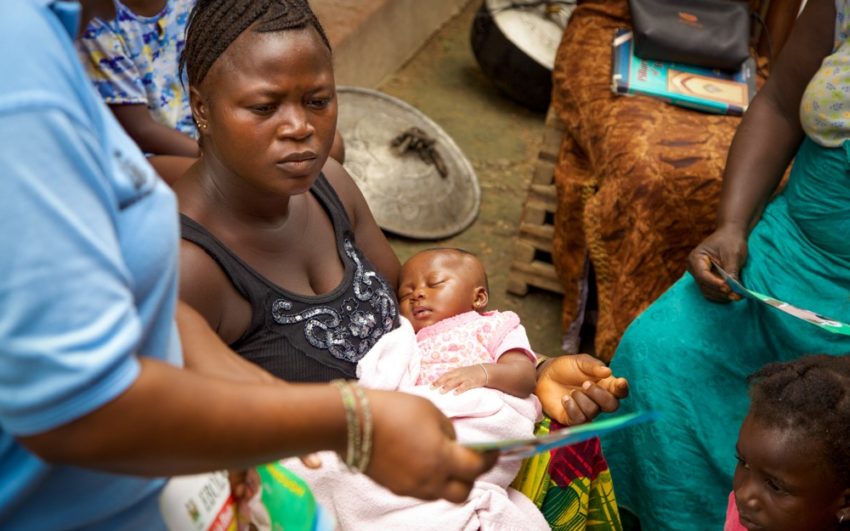 Early on in the humanitarian response, World Vision health workers in Sierra Leone distributed Ebola-prevention information and materials to empower pastors, imams, and community leaders to help their communities limit the spread of the virus. Here, a health worker passes out materials to women in Bonthe. (©2014 World Vision/photo by Jonathan Bundu)

A family in Bo, Sierra Leone, reads material from World Vision about how to protect themselves from Ebola. (©2014 World Vision/photo by Jonathan Bundu)

Faith leaders in Sierra Leone played an integral role in combatting the spread of Ebola. Early on in the outbreak, the Rev. Peter Kainwo, right, and imam Alhaji Mustapha Alpha Koker went through World Vision's Channels of Hope training to learn how to talk about sensitive aspects of Ebola among their communities. The two leaders swapped pulpits to emphasize to their congregations the urgency of preventing Ebola's spread. In all, 460 imams and pastors and 150 village leaders have been trained on Ebola prevention. "When faith leaders got involved … it was a turning point," says Dr. Alhaji Turay, district medical officer in Bo, Sierra Leone. "They convinced people in churches and mosques to stop touching and burying Ebola victims, who remain highly infectious." (©2014 World Vision)

The 2014 outbreak of Ebola virus disease in West Africa was the “largest, most severe and most complex Ebola epidemic” in history, according to the World Health Organization. More than 28,000 people were infected, and over 11,000 people died before the international public health emergency ended in June 2016. Most of the cases occurred in three countries: Guinea, Sierra Leone, and Liberia. Without an effective early-warning system, the virus spread rapidly within the region, revealing the failures of disjointed and under-resourced healthcare systems.

In Sierra Leone, where World Vision concentrated its efforts to battle the Ebola virus disease, cases were first reported in March 2014. Sierra Leone’s health system was ill-prepared to address the overwhelming number of cases. By March 2016 when Sierra Leone was declared Ebola-free, the World Health Organization had documented a total of 14,124 cases, including 3,955 deaths, in Sierra Leone — more than any other country.

Map of Ebola cases in West Africa from January 2014 to December 2015. (Courtesy of the WHO)

FAQs: What you need to know about Ebola virus disease

Learn Ebola virus disease facts and frequently asked questions, how World Vision responded to the 2014 to 2016 epidemic in West Africa, and how you can help people affected by similar emerging infectious disease epidemics like Zika and the new coronavirus.

The Ebola virus disease — formerly known as Ebola hemorrhagic fever — is a rare and frequently deadly disease in humans caused by infection with one of four Ebola virus strains — Zaire, Sudan, Bundibugyo, or Tai Forest.

What are the symptoms of Ebola?

Symptoms of Ebola virus disease include high body temperatures, headache, abdominal pain, diarrhea, vomiting, and both internal and external bleeding, such as from gums and stool. It can be difficult to distinguish Ebola from other diseases such as malaria, typhoid fever, and meningitis. Symptoms can appear from 2 to 21 days after contracting the disease. People who have contracted the disease can’t give it to others until symptoms appear.

There is no proven, licensed treatment for the virus disease, but treating early symptoms and rehydration with IV fluids improve survival rates.

Potential treatments including blood, immunological, and drug therapies are being developed, and an experimental Ebola vaccine proved highly effective in a 2015 trial in Guinea.

The Ebola vaccine is being used in the Democratic Republic of Congo to give immunity to people at highest risk for the disease, including families of people who are infected. The vaccine proved safe and effective in earlier testing but is not yet licensed for widespread use.

How is the Ebola virus spread?

Ebola is extremely infectious, meaning direct contact with a small amount of the virus can lead to infection, but it does not spread through the air. People become infected with the virus by close contact with infected animals, sometimes by butchering and eating bush meat, or by exposure to the bodily fluids of infected people. Sexual contact also spreads the virus.

The bodies of those who have died from Ebola virus disease carry high concentrations of the virus that can spread to others through contact. Providing safe and dignified burials for people is important in preventing the spread of the disease.

How long did the last major Ebola outbreak last?

The last major outbreak of the Ebola virus lasted from March 2014 to June 2016 in West Africa.

Why did the 2014 outbreak in West Africa spread so rapidly?

The Ebola virus disease was relatively unknown in West Africa, so it infected and killed people for months before being identified. It was the first Ebola outbreak to spread unchecked through urban areas — the capital cities of Guinea, Sierra Leone, and Liberia. The outbreak was traced back to a 2-year-old child infected in Guinea in December 2013, three months before the outbreak was declared.

The infection spread rapidly where infected people were cared for at home or died at home and their bodies were washed and prepared for burial by family members, according to tradition.

How many people died during the 2014 Ebola virus outbreak?

Why was Ebola so hard to stop?

Medical services in West Africa weren’t well enough staffed or equipped to handle the disease, and people didn’t at first want to trust their sick loved ones to medical care. Without early diagnosis and notification, the international medical community was delayed in providing resources to curb the spread of the outbreak.

The effects of the epidemic were worst in Sierra Leone in terms of the total numbers of cases and the numbers of cases per capita. The country’s health system was fragile and short of healthcare workers, shortcomings dating from the civil war that ended a decade before.

How is the Ebola virus compared to the new coronavirus?

Coronavirus is a family of viruses, which can cause the common cold or more severe diseases such as SARS (severe acute respiratory syndrome), MERS (Middle East respiratory syndrome), and the new coronavirus disease that first appeared in late 2019 in Wuhan, China, called COVID-19. A COVID-19 pandemic has claimed the lives of more than 18,200 people and sickened more than 407,000 people globally, with numbers still rising. Globally, about 3.4% of people infected with the coronavirus disease have died.

Interestingly, a failed Ebola drug — remdesivir — is one of the treatments in testing for the new coronavirus.

“There’s only one drug right now that we think may have real efficacy,” says Bruce Aylward of the World Health Organization. “And that’s remdesivir.”

Is there a danger of an Ebola outbreak in the United States?

The U.S. Centers for Disease Control and Prevention says Ebola is extremely unlikely to occur in the U.S. since the disease is not spread by casual contact. There have been a few cases diagnosed in the U.S. among people who have traveled where the infection is found, and that could happen again.

The same methods used to control outbreaks of the disease would be effective in preventing its spread in the U.S.: identifying and isolating cases, tracing potential contacts, caring for patients in specially designed Ebola treatment centers, and ensuring safe and dignified burials.

How can I help Ebola survivors and people affected by viruses?

Epidemics like Ebola, Zika, and the new coronavirus have the potential to force children into desperate situations, including dropping out of school and resorting to working, begging, or other exploitative situations to survive.

Ebola was first identified in the Democratic Republic of Congo, then known as Zaire, and in what is now South Sudan.

When the outbreak began in 2014, the virus was not well known in West Africa and quickly reached epidemic proportions.

2018 — Ebola outbreak in the Democratic Republic of the Congo

The World Health Organization has declared that an Ebola outbreak in northeast Democratic Republic of the Congo is a Public Health Emergency of International Concern, meaning it will take a concerted effort among nations to prevent the spread of the disease beyond national boundaries. This outbreak was first reported in northwest Democratic Republic of the Congo in May 2018 and emerged in August 2018 in northeastern provinces.

2019 — Outbreak continues in the Democratic Republic of the Congo

During the first eight months of the outbreak, until March 2019, more than 1,000 cases of Ebola were reported. But between April and June 2019, cases doubled, with 1,000 new cases reported in three months. Reports of new cases remain high, averaging between 75 and 100 each week.

2020 — Cases in the Democratic Republic of the Congo decline dramatically

The number of Ebola cases in the Democratic Republic of the Congo decline significantly, with the last confirmed case on Feb. 17. With 3,444 total cases and 2,264 deaths as of March 6, 2020, it is now the country’s largest-ever Ebola outbreak. It is also the second-largest Ebola outbreak ever, surpassed only by the West Africa outbreak from 2014 to 2016.

At the time Ebola struck Sierra Leone, World Vision was already working in 25 area development programs benefiting about 58,000 children and their families. Our first concern was for their safety. We quickly realized we’d have to step out in faith beyond our usual development work to make a strong contribution to ending the epidemic.

Building on 20 years of grassroots involvement in Sierra Leone, we joined with communities, partner agencies, and every level of government in the battle against Ebola. There were no deaths among the World Vision-supported children and their families.

A 2016 study of World Vision’s response by Johns Hopkins University indicated that the organization is a trusted source of Ebola prevention information and World Vision’s faith-based approach is effective in influencing people to change hazardous behavior and seek medical attention.

During the emergency response, World Vision reached 1.6 million people through these and other initiatives:

In the video, follow an Ebola burial team providing a safe and dignified burial for Betty Thomas, 42, from the Moyamba district of Sierra Leone. When arriving at her home, the team put on protective gear, a 10- to 15-minute process that includes each one putting on three pairs of gloves, and wrapped and removed her body while spraying disinfectant. A pastor then led a short service, including the Lord’s Prayer, and Betty’s body was taken away to be buried. Her relatives followed the team to her grave.

Sponsor a child in Sierra Leone as a personal way to show God’s love to a child in need.