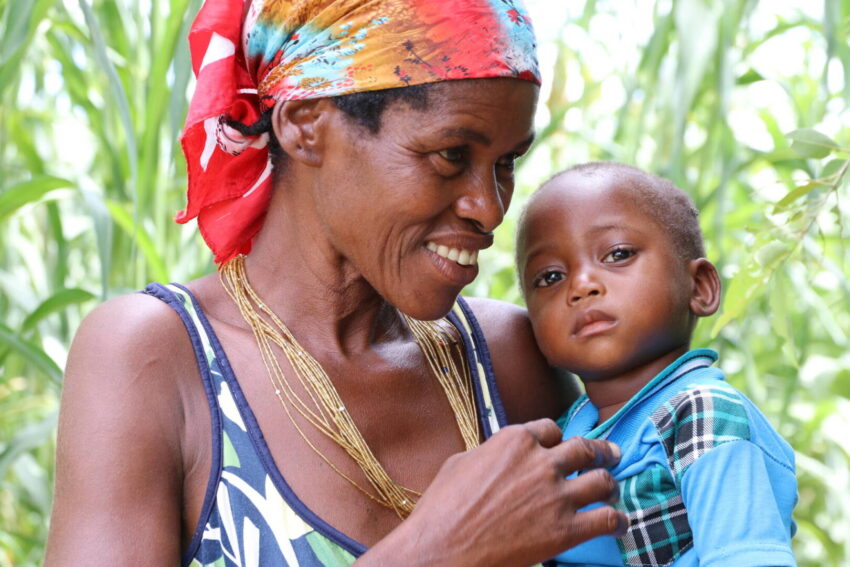 The first time 49-year-old Cordelia brought her 1.5-year-old grandson, Paulino, to a hospital in 2020, he hadn’t eaten in three days. The family only had water to give him. “[The hospital] told me he needed to eat more healthy food like eggs, goat meat, and milk — but I didn’t have any of those things to give him. Our chickens died during the drought, and I sold four goats and a pig to get money to buy some food,” shares Cordelia. Her family had experienced times of drought in Angola before, but this year was the worst yet. “Some days we would eat, some days we wouldn’t.”

Angola’s 27-year civil war ended in 2002, but the effects continue to impact the country today. The public health system was crippled during the war, leaving communities unable to access vital health services. Food security weakened further over the years as drought caused an uptick in malnutrition through Angola’s southwestern provinces. Drought continues to drive malnutrition and hunger in Cunene province, where Cordelia and Paulino call home.

With the ground stricken with dry pastures, Cordelia could no longer grow food to sustain her family. Paulino typically ate one serving of porridge a day, until his little body refused to keep food in it — an indicator of severe acute malnutrition.

“The seriousness of Paulino’s condition cannot be underestimated. If he had not begun taking MANA when he did, he may have died. …I met Paulino when he was severely malnourished. The difference from then to now is incredible,” shares Isaias Ricardo, World Vision’s nutrition supervisor in Angola, who met Paulino shortly after he arrived at the hospital.

After one month spent stabilizing Paulino’s weight, he was discharged from the clinic as he transitioned toward recovery. He continued to consume MANA three times daily for a month after returning home. In the next four months, Paulino’s weight and health increased as he recovered, and he gained nearly two and a half pounds. “I am very grateful that Paulino is healthy now and that he plays. I’m thankful to the people who gave the MANA,” says Cordelia.

Hardship and hope in the region

Two years after Paulino’s recovery, his home area remains desolate with the adverse effects of cyclical drought. Over 1.5 million people in the region are experiencing food insecurity as the country faces its worst drought in 40 years. Crops wither with dryness, and again with excessive rain during the rainy season. This cycle leaves families with limited food, resulting in continued hunger and malnutrition in southwestern Angola.

“If a child’s nutritional intake is not adequate in the first five years of life, assuming they survive, this can have disastrous consequences on the rest of their lives, impacting education outcomes and critical thinking abilities,” shares Isais as he emphasizes the importance of nutrition for young kids. “Detecting severe malnutrition as soon as possible, and administering therapeutic food, is a lifeline for these children.”

World Vision has trained staff at 90 health centers in Cunene on identifying malnutrition and treatment practices. Community health workers share health and nutrition messaging with families to equip them with knowledge that they can implement at home.

Suzy Sainovski formerly worked as a communicator for World Vision.