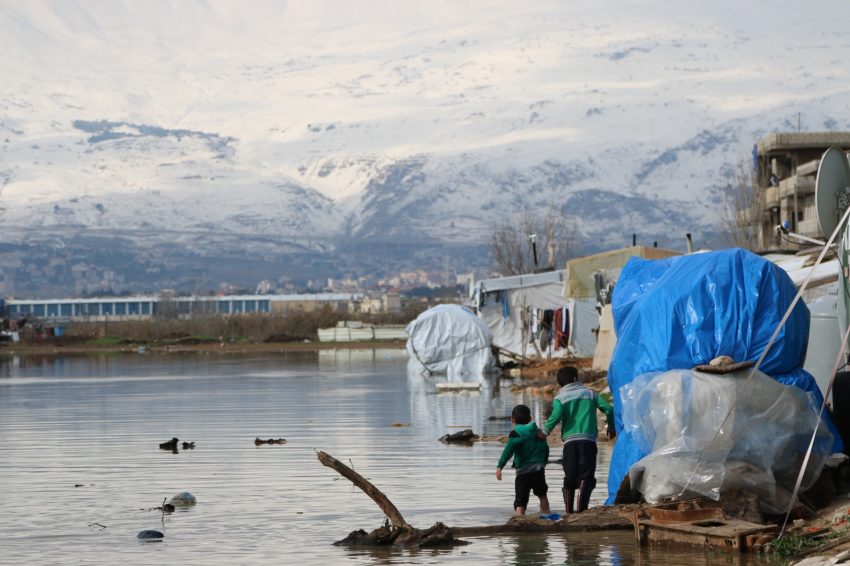 Children walk through a flooded tent settlement in Lebanon’s Bekaa Valley after a winter storm in January 2019. Many Syrian refugees have been flooded out of their shelters and lost all their possessions. (©2019 World Vision/photo by George Mghames) 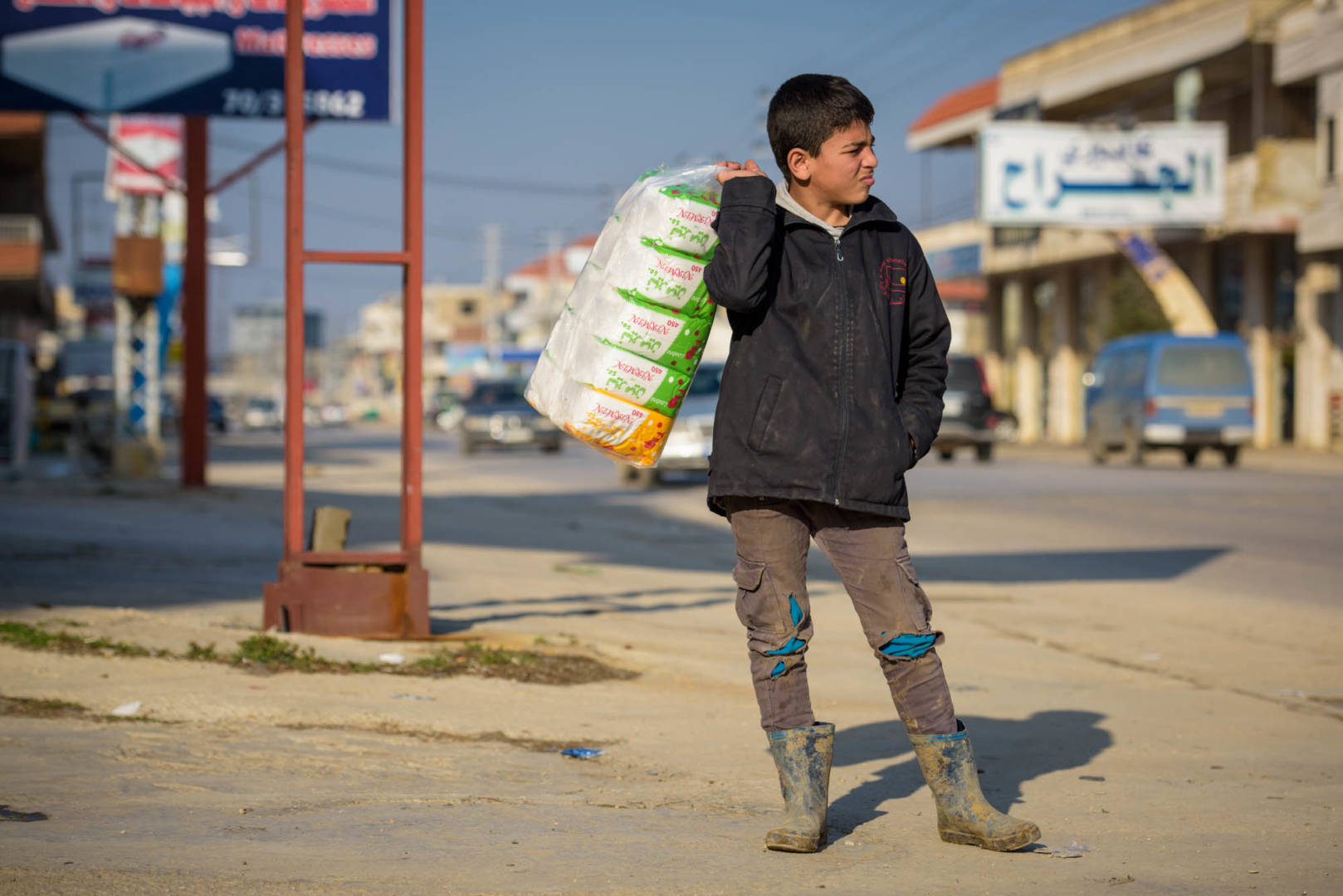 Ali, a Syrian refugee boy in the Bekaa Valley of Lebanon, sells tissues on the street to earn money. He is the sole wage earner for his family. (©2016 World Vision/photo by Jon Warren) 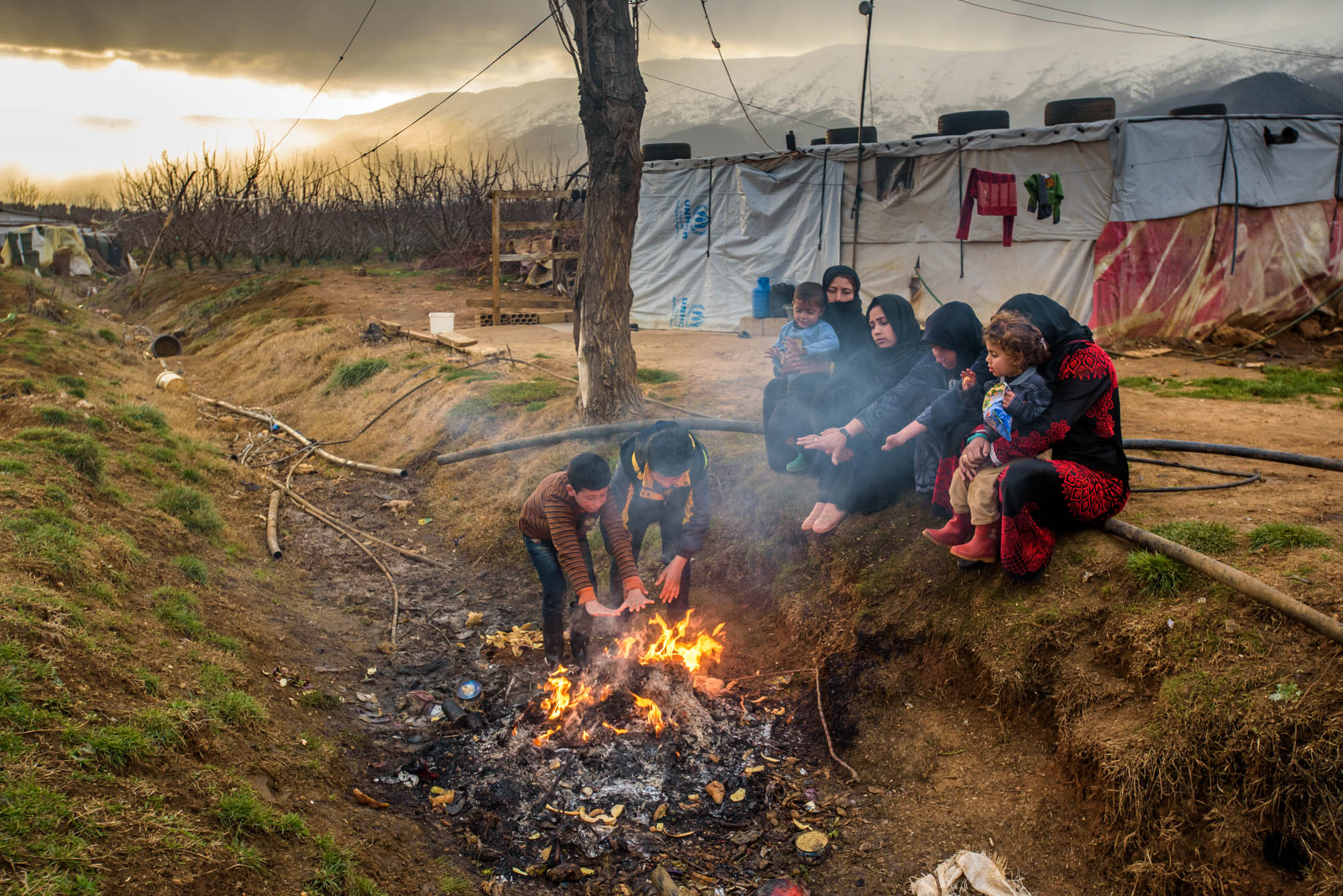 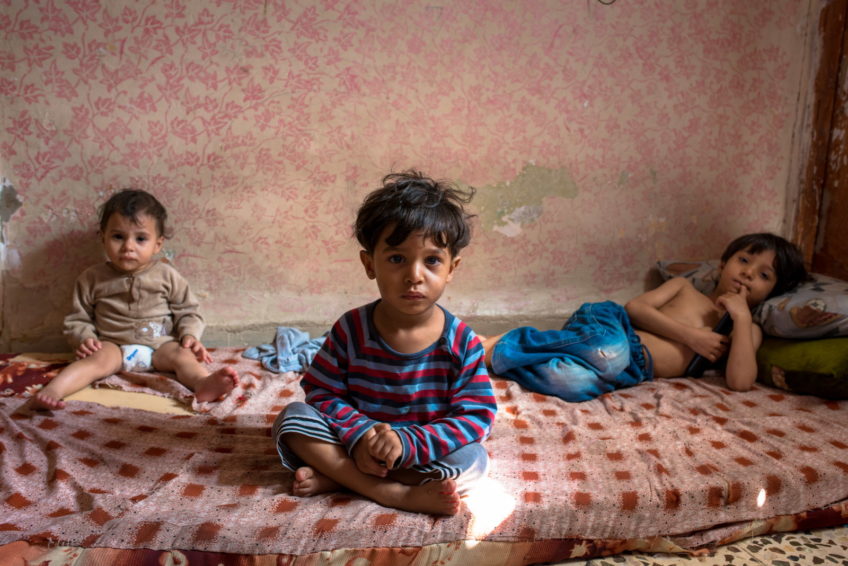 Syrian refugee children Islam, 1, Semer, 2, and Adel, 5, live in a rundown room in a city in Jordan. Life is difficult for their mother, Nura, who nevertheless has hopes for them. “I want my children to be able to play, go to school and grow up healthy and strong,” she says. (©2013 World Vision/photo by Jon Warren) 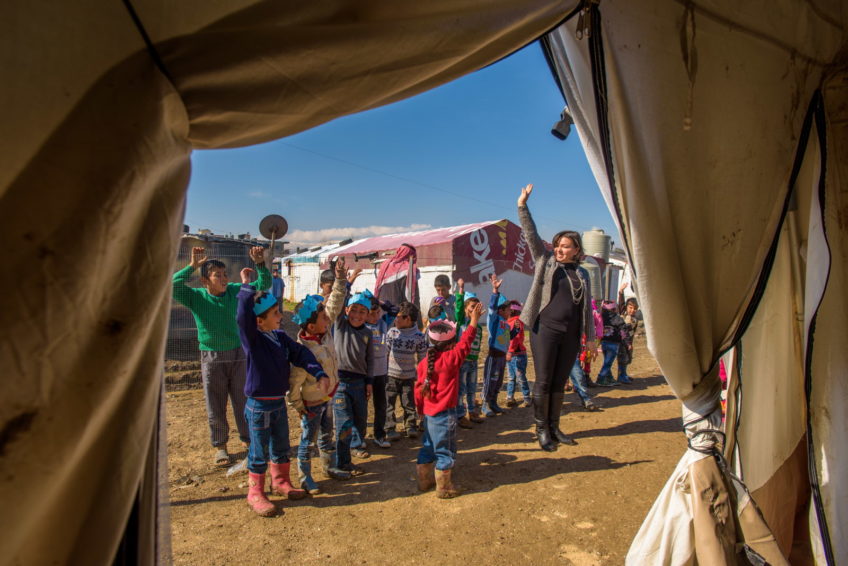 Teacher Wafaa Anjarani, a Syrian refugee, plays follow-the-leader with her class of 5- and 6-year-olds in a World Vision early education center. To prepare for starting school in Lebanon, students learn English, math, Arabic, and science taught with a lot of songs and activities. In a half-day session, there’s also time for play and a meal. (©2016 World Vision/photo by Jon Warren) 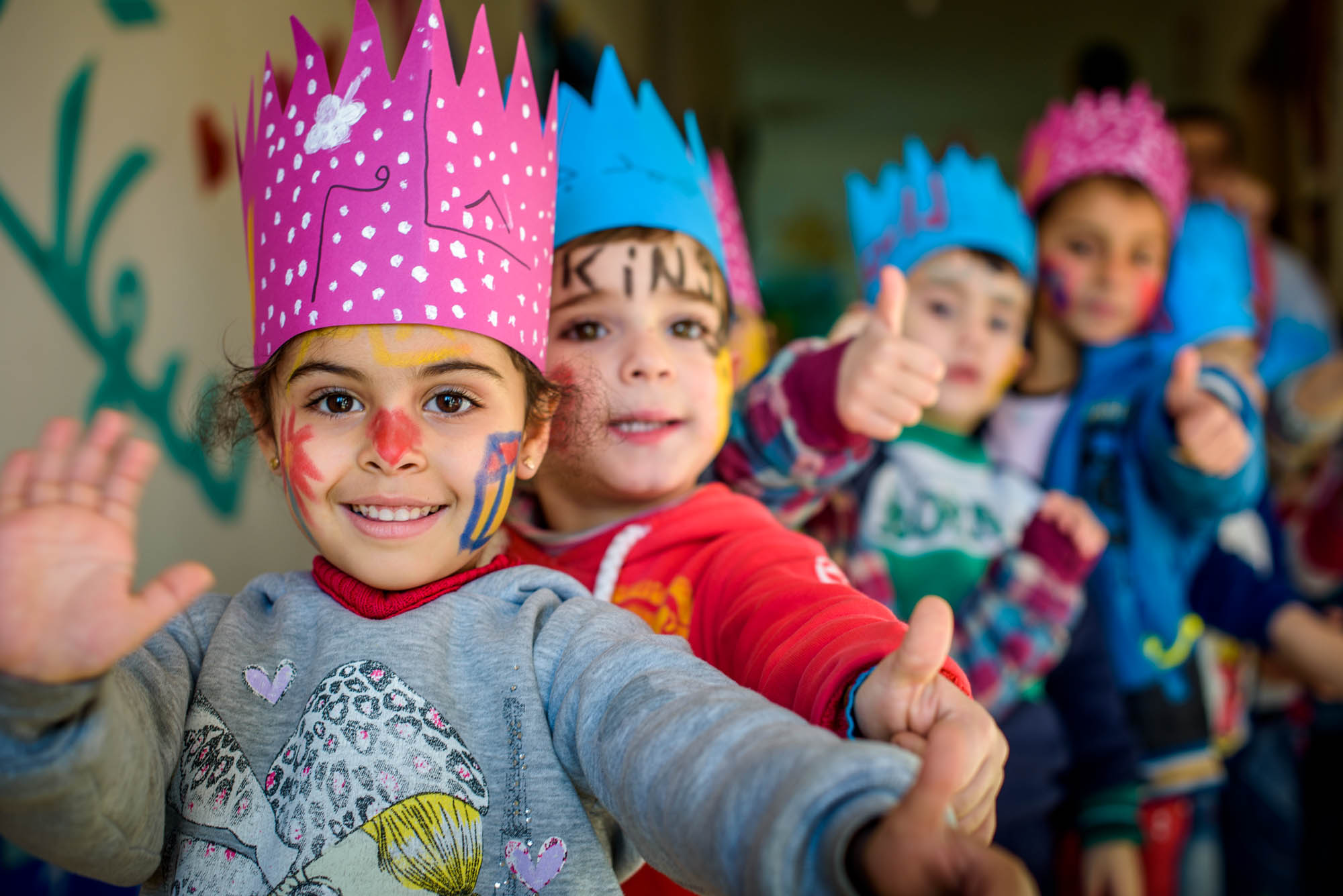 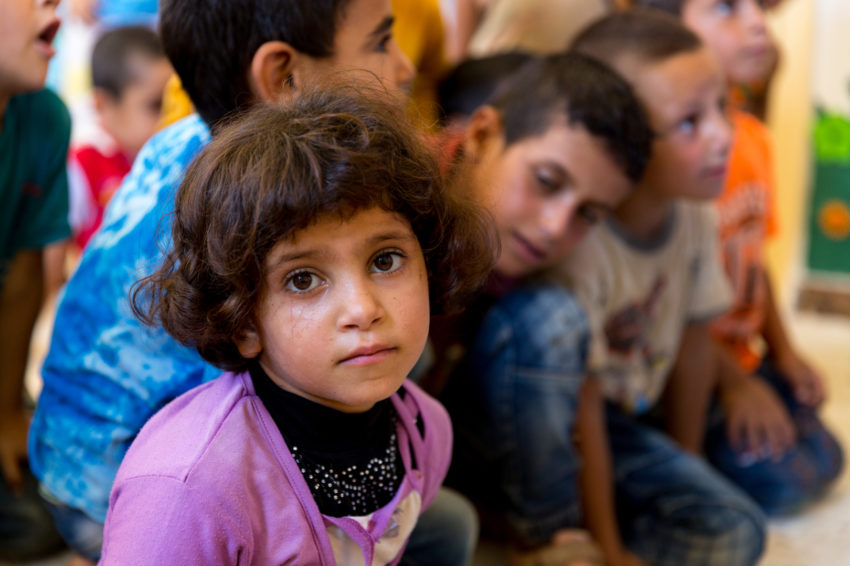 Syrian refugee children in northern Lebanon take part in a World Vision early education program that prepares them for formal schooling. The learning center they attend is an oasis of fun and affirmation in an insecure and deprived environment. (©2017 World Vision)

Since the Syrian civil war officially began March 15, 2011, families have suffered under a brutal conflict that has killed hundreds of thousands of people, torn the nation apart, and set back the standard of living by decades. Nearly 12 million people in the country need humanitarian assistance.

Healthcare centers and hospitals, schools, utilities, and water and sanitation systems are damaged or destroyed. Historic landmarks and once-busy marketplaces have been reduced to rubble.

War broke the social and business ties that bound neighbors to their community. Millions scattered, creating the largest refugee and displacement crisis of our time. About 6.7 million Syrians are now refugees, and another 6.2 million people are displaced within Syria. Half of the people affected are children.

The Syrian army and various militant groups are fighting to control territory in the country’s northeast and northwest. The civil war has become a sectarian conflict, with religious groups opposing each other, which affects the whole region and is heavily influenced by international interventions.

Oct. 17, 2019 update: Since military operations increased in northeast Syria early in October, more than 130 civilians have been killed and more than 160,000 have fled, including at least 70,000 children, according to the U.N. refugee agency.

“Children in northeast Syria have already lived through years of war and the terrifying rule of ISIS. Now they’re living in fear once again — forced to take what they can carry and flee, sheltering from the bombardment, and cut off in some cases from life-saving humanitarian assistance,” says Marc-Andre Hensel, World Vision’s Syria response director. “The situation is complicated, but we know that children will need help with everything from basic items like blankets and soap to mental health services.”

History of the Syrian refugee crisis

2010 — Syria is a modern society built on the cradle of civilization.

2013 — Conflict increases as other countries join the fight.

2015 — Europe feels the pressure of Syrian refugees and migrants.

2018 — Humanitarian aid is limited as the conflict continues.

FAQs: What you need to know about the Syrian refugee crisis

Explore frequently asked questions about the Syrian civil war, and learn how you can help Syrian refugees and displaced families:

Fast facts: What is happening in Syria?

The tragedy in Syria continues to affect millions of people and spill over into surrounding countries. For many Syrian children, all they have known is war. Their grim circumstances have had an extreme effect on their mental, physical, and social health, jeopardizing the future of children who will one day need to rebuild Syria.

What are Syrians’ greatest needs?

Syrians fleeing conflict often leave everything behind. So they need all the basics to sustain their lives: food, clothing, healthcare, shelter, and household and hygiene items. Refugees also need reliable supplies of clean water, as well as sanitation facilities. Children need a safe environment and a chance to play and go to school. Adults need employment options in cases of long-term displacement.

How can I help Syrian refugees?

You can help Syrian refugees by praying for them, using your gifts and influence for their benefit, and learning more about the Syrian refugee crisis.

Why is there a Syrian civil war?

There is a civil war in Syria because conflict broke out in 2011 after a forceful crackdown on peaceful student protests against the government of Bashar al-Assad. The conflict has continued and accelerated as government troops, armed rebels, and external forces clash, take territory from each other, and vie to hold it. The consequences are tragic for civilians, particularly children.

What started the Syrian civil war?

The Syrian civil war started with peaceful protests. Young people took to the streets in Syria’s southern city, Daraa, in March 2011, seeking government reforms. The movement was part of the social media-fueled Arab Spring that swept through the Middle East and North Africa. March 15, dubbed the “day of rage,” was a turning point, which is why it is internationally recognized as the anniversary of the Syrian civil war.

As protests spread through Syria, they were countered by strong government crackdowns and increasing violence from both government forces and protesters. By the following year, Syria was embroiled in a civil war, with the Syrian military opposing a growing number of militant groups. Conflict has torn apart the lives of Syrian children and families as government forces and militant groups fight to take and rule territory.

The country’s weakened governance, as well as the destruction of its social services and institutions, make Syria a textbook case of a fragile state.

Why are Syrians leaving their homes?

Syrians are leaving their homes when life becomes unbearable. Some of the top reasons they cite include:

Mohammed almost waited too late to get his family to Lebanon safely. Bombs destroyed their home and shop; his brother was killed. Other families say their turning point was when militants occupied their school or their hospital was destroyed.

Where are Syrian refugees going?

The majority of Syria’s 6.7 million refugees have fled — by land and sea — across borders to neighboring countries but remain in the Middle East.

At the peak of the European migrant crisis in 2015, 1.3 million Syrians requested asylum in Europe. But the number of new asylum seekers has declined significantly since then.

In contrast, the United States admitted 18,000 Syrian refugees between October 2011 and Dec. 31, 2016. Read the story of Washington state resident Cari Conklin, who was among a group who greeted the first Syrian family to arrive in Seattle November 2015 — Bassam Alhamdan, his wife, Rabah, and their six children. They had escaped hell in Syria, suffered terribly as refugees in Jordan, and then were given the miraculous opportunity to come to the U.S.

How is the Syrian civil war affecting children?

Many Syrian children have never known a time without war. For millions of them, the conflict has stolen their childhood  and affected their long-term physical and mental health as well as their prospects for the future. Many children caught up in this crisis lost family members and friends to the violence, suffered physical and psychological trauma, and had to leave school.

Here are some specific ways Syrian children are affected by the war:

If you could see through a Syrian refugee child’s eyes, what would life look like? In an informal tent settlement in Lebanon, we asked children to show us. These are the scenes they wanted to share. Read more about how the war is affecting Syria’s children in a special report from World Vision magazine, “Syria Crisis and the Scars of War.”

What is World Vision doing to help Syrians affected by conflict?

World Vision provides aid to children and families in Syria, Lebanon, and Jordan, as well as Iraq, which has also suffered from conflict and humanitarian crises. Since the Syrian civil war began, we have helped more than 2.5 million people in the region.

World Vision has been working in the Middle East for nearly 40 years and is dedicated to improving the lives of children, families, and the communities where they live through long-term sustainable development as well as responding to disasters — both natural and man-made.

World Vision quickly extended a helping hand to Syrian families who fled to Lebanon in 2011. Since then, our work has expanded to other countries hosting Syrian refugees and into Syria. Children and their long-term needs are always first in our minds as we plan our programming.

2015 — Refugees and migrants flock to Europe.

Chris Huber, Kathryn Reid, and Denise C. Koenig of World Vision’s staff in the U.S and World Vision staff in Lebanon and Jordan contributed to this article.

Rohingya refugees in Bangladesh: Facts, FAQs, and how to help 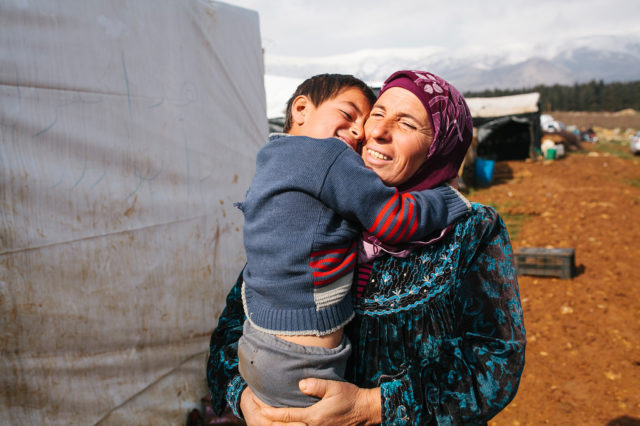