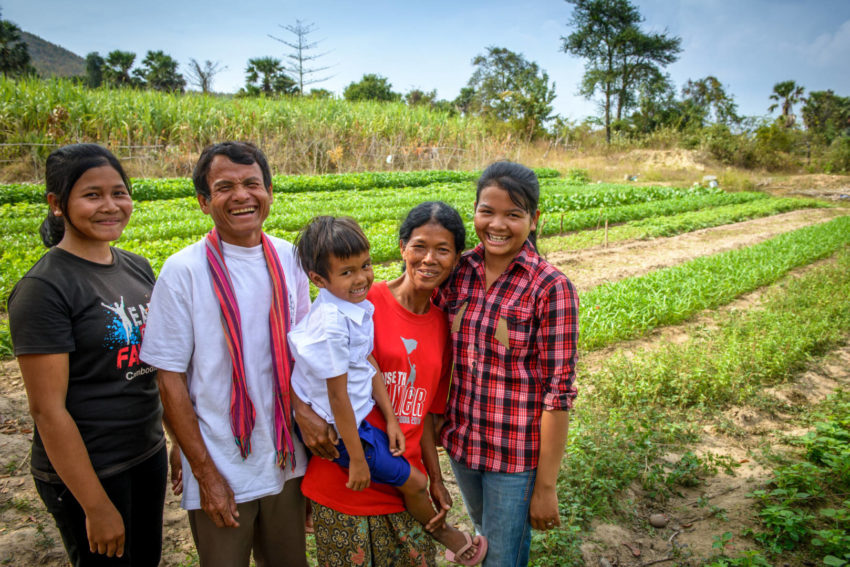 Sok Ouk’s family has been transformed from a burden on the community to an example for others. (©2015 World Vision/photo by Laura Reinhardt)

Eighteen-year-old Saoly Ouk wipes away tears while thinking about the hard times her family went through. Her voice breaks with emotion as she remembers how she and her siblings fought over the family’s meager amounts of rice, which were never enough to feed everyone.

When the family went hungry, it wasn’t just a waiting game until the next paycheck. Hunger could — and did — last up to four months for the Ouk family. In Phnom Sruoch, Cambodia, the dry season left the family without enough water to grow crops.

Sok borrowed rice seeds to feed his children, but he had to double the amount to pay the debt. Caught in the cycle of poverty, the Ouk family often ended up working off their debts.

Both Sok and his wife, 49-year-old Chey Ren, lived in fear through the Pol Pot regime in the 1970s. Pol Pot and the Khmer Rouge killed millions of Cambodians during their reign of terror, including alleged intellectuals. As Pol Pot preached the ideal of an agrarian society, children like Sok and Chey Ren had to end their education after third or fourth grade.

It looked like Sok and Chey Ren’s children would face the same fate. They regularly missed school to help their parents chop bamboo and hunt for wild fruit and vegetables to sell, all to repay the family’s debt. Saoly only made it to school once or twice a week, so in the sixth grade, she dropped out altogether to stay home, help her mother, and work for others.

“The family was a burden to the whole community,” says Narin Ouk (no relation), manager of World Vision’s programs in the area. But that was soon to change.

In 2004, World Vision started registering children for child sponsorship in Phnom Sruoch, and Saoly’s younger sister, Saolun, was sponsored. In Cambodia and other countries where World Vision has sponsorship programs, the entire community benefits — not just the individual children themselves.

Sponsorship is the foundation for other programs addressing health, education, clean water, economic development — and agriculture. In Phnom Sruoch, World Vision started an agricultural cooperative. Sok joined the group, where he learned best practices for farming and became a member of a rice bank.

The bank allows him to access loans in case of emergency, easing the debt burden on the family. And because the cooperative is recognized by the Cambodian government, farmers can buy fertilizer and rice seeds at lower prices from the state. Government recognition allows the cooperative greater access to markets in which to sell their crops and ensures that farmers in Phnom Sruoch aren’t dependent on World Vision — so as programs are phased out, farmers can continue to provide for their families.

World Vision also introduced an irrigation system to the community, giving families access to water during the dry season to grow crops. Soon, hunger was a thing of the past.

I believe that there is a God who showed his love to me.—Saoly Ouk

As the cooperative was getting up and running, other programs sprung up in Phnom Sruoch for children and teenagers. At first, Saoly was reluctant to join the new youth club, which taught children about sanitation and hygiene, child protection, children’s rights, and God’s love for them. But she’d seen youth club members from other villages become more courageous and outspoken, and she wanted to bring some of that bravery into her own life.

“I wasn’t courageous,” she says of herself before joining the youth club. “I wasn’t able to talk to people or join in at school. I don’t have the words to describe it. I was like an isolated person.”

But after joining the youth club, she didn’t feel isolated anymore. The other members of the club knew her family was in need, so they raised funds and donated rice to the Ouk household so they wouldn’t have to go hungry anymore.

“I believe that there is a God who showed his love to me,” says Saoly. “God made the club, and the club members raised some rice to support my family.”

Speaking up for God

After Saoly had attended the youth club for four years, World Vision staff members worked with a local church to bring a home church to Phnom Sruoch. Saoly started attending as a test to see how good and true God’s word was.

About a year after she started attending the church, Saoly gathered the courage to share what she had learned about God and Jesus with her father. She remembers it well. “My father got drunk, and the spirit of God told me that I had to speak up to change him,” she says. “So I started to talk.”

She shared John 3:16 with her father and then asked if he liked the words. He didn’t, and he went upstairs to sleep off the effects of his drinking.

She talked to him a few times that year but saw no positive response, so she stopped for a while. Over time, she noticed a softening in her father, so she talked to him again, this time about attending church. He gave his approval to attend, not knowing that she and Saolun had already been secretly going to church. In fact, Saoly had been baptized in 2010.

Finally, Sok agreed to go with Saoly in 2013. “I went to church,” he says. “I heard the pastor sharing pitiful stories. When I heard those stories and when I compared them to mine, I felt so touched.” He and Chey Ren became Christians.

That was three years ago. Now, Sok helps his neighbors by offering them training. He’s become a loving husband and reliable provider. His role in the family has changed radically. In the past, his children feared him and his violent ways. Now, he says, “They love me indeed.”

After a year away from school, Saoly was able to return full-time. This thrills Sok. “I’m very happy now that my children can go to school, and I really hope that they study hard,” he says. Saoly, who is in 12th grade with Saolun, hopes to finish school this year and then continue on to university, where she’s considering studying agriculture.

VisionFund, World Vision’s microfinance partner, has provided an open bank for registered children in the community to use for college tuition and expenses. Saoly plans to do just that.

Sponsorship not only benefits an individual child, but their entire community. Be

The girl who once was afraid to join the youth club now regularly leads the group, teaching younger children, organizing community-cleaning events, and speaking publicly about her life experiences. “I’ve changed. I’m braver and more courageous than before,” she says.

Her once-troubled household, the burden of the village, now serves as a role model for other families in Phnom Sruoch.