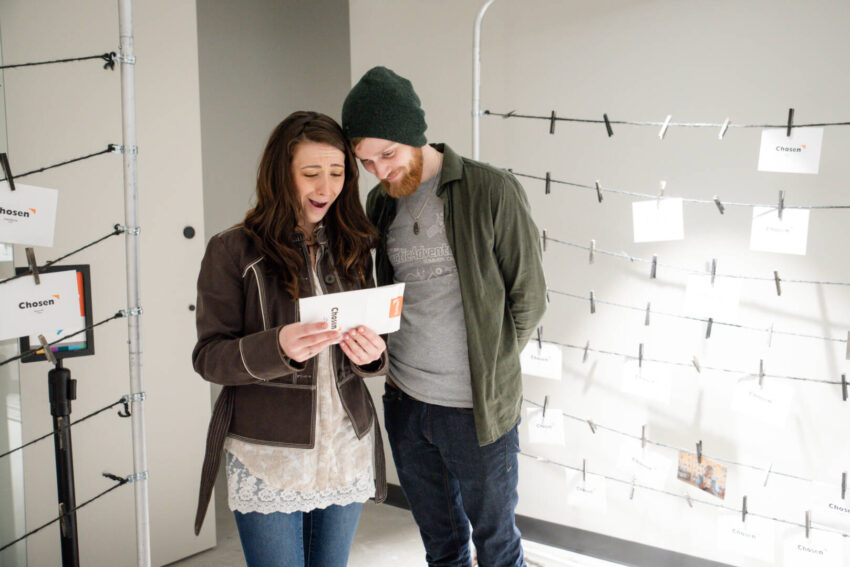 For Katie and Geoff Lytle of Chicago, being chosen as sponsors was an emotional reminder of God's love. World Vision's reimagined approach to sponsorship has been life-changing for many people like Katie and Geoff. (©2019 World Vision/photo by Andrea Peer)

When was the last time you were chosen? Maybe you were chosen for a new job or an academic program, a relationship or an innovative project. Or maybe it feels like you haven’t been chosen in a really long time.

Regardless, there is a new way that YOU can be chosen. You may be familiar with World Vision child sponsorship — a one-to-one connection through which your prayers and monthly donations empower a child and their family and community to create lasting change in their own lives. Traditionally, you’ve selected a child you want to connect with. But now, we’ve flipped that choice — giving children the power to choose. This means that you can be chosen by a child as their sponsor!

Why does being chosen matter? Joel from Chicago says, “It’s going to be a life-changing experience.” Discover five ways being chosen has changed people’s lives for the better.

1. Being chosen can be a reminder of God’s love.

When the person who chooses you is a child on the other side of the world, it’s even more remarkable. Regis, 35, from Chicago, was chosen by 9-year-old Rosemary from Kenya — an experience that felt familiar. It reminded him of being chosen by his mother through adoption from an orphanage in India. Being chosen by Rosemary also reminded Regis of Jesus’ love. “This is a good reminder of Jesus. … He has not forgotten me. He hasn’t forsaken me. He continues to love me,” says Regis.

This is a good reminder of Jesus.—Regis Storey, World Vision sponsor

2. Being chosen is an invitation to participate.

It’s an offer to step into a new, life-giving relationship — as well as God’s work of transformation, in our own lives and others’. Joel Barnes has donated to charities before, but he says being chosen as a sponsor feels entirely different. “There’s something that’s inside of me that’s been able to be connected at a different level because I’ve been invited,” says Joel. He says he feels like this invitation is especially important now “as our country starts to wrap its head around privilege.”

Joel sees Chosen as a reversal of our entitlement, inviting humility and participation. “The invitation that Chosen has provided disarms our privileges that we have taken for granted for so long. … It invites us into a different space, [one] that we are welcomed and asked to participate in, by a child, on the other side of the world. And that’s powerful,” says Joel.

3. Being chosen can provide a sense of purpose.

In the Bible, we learn that because God has chosen us, we can live not just for ourselves, but for God and others as well. Being chosen by a child can extend that sense of purpose.

When Rosemarie, 70, was chosen as a sponsor by 7-year-old Ryan from Kenya, she found “another person in my life that I want to live for.” When Joel was chosen by Collins, he found “another layer of accountability and motivation for the call that God has on my life.” And Yinka Owolabi, 35, found an answer to her prayer for God to use her when she was chosen as a sponsor by two children — Mary and Mutinda. “This is a huge way to be used,” Yinka said, who has become a role model and mentor for both kids. “I am feeling needed, wanted, and even appreciated.”

I am feeling needed, wanted, and even appreciated.

4. Being chosen can help you make a new connection.

It’s an opportunity for a new relationship, one that may be different than any you’ve had before. As a lawyer in Chicago, Yinka discovered a surprising connection with Mary, one of the kids who chose her — Mary wanted to be a lawyer, too. In the year and a half since then, Yinka’s connection with Mary has deepened. She writes emails, sends packages, and gets more letters in return from the two kids than she was expecting. “It is Christmas Day whenever I get a letter,” says Yinka, laughing. “It’s nice to be remembered. It’s nice to hear from someone else, and even to hear from someone around the world, it’s a special thing.”

It’s nice to be remembered.  … it’s a special thing.

Connections feel especially important today. “For me, having the open communication with a child, that’s priceless,” says Yinka. “Especially in light of the fact that many of us are working from home, working remotely, it’s definitely something that you can take advantage of the virtual ways to connect.”

5. Being chosen can provide a new perspective … and freedom!

During the challenges of the COVID-19 pandemic, many of us are searching for a new perspective. For Joel, having a friendship with a child living in poverty in rural Kenya has given him a new perspective, particularly during the months he’s been stuck at home with less income and less freedom. He keeps a photo of Collins, his sponsored child, on his desk and prays for him daily. “It has allowed me a window into the perspective of another life, another lifestyle,” says Joel about their connection. “The things that we have to complain about … pale in comparison when you start to hold them up to other people in the world’s situation right now with this virus.”

Are you ready for a new perspective? Sign up today to be chosen by a child.

Experience the joy of being chosen!