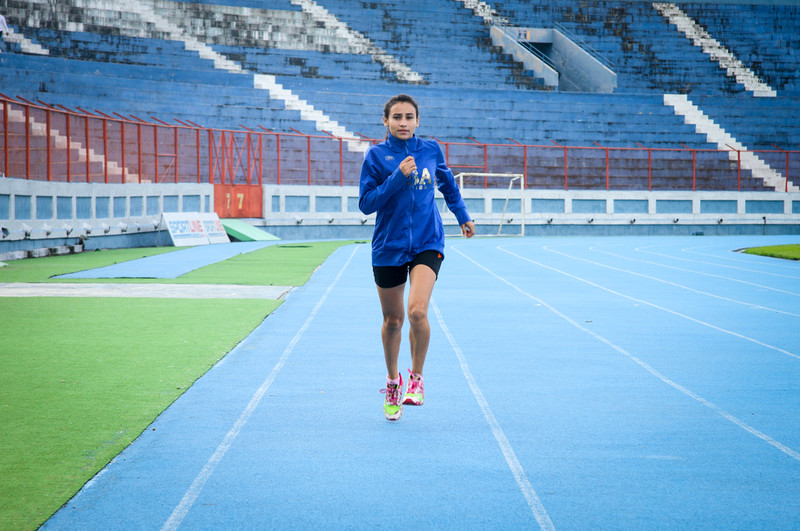 Delbyn Cartagena has a special place in the sports history of El Salvador. The 28-year-old professional long-distance runner has won dozens of medals, trophies, and national and international recognition.

Discipline, effort, and determination have had a great deal to do with her success, but Delbyn credits sponsorship for providing access to competitive sports. “I am an athlete thanks to World Vision’s sponsorship program,” she says. “I am so thankful for those sponsors who give opportunities to children.”

She was one of many girls and boys to enjoy new opportunities in San Ignacio, a town in the mountainous region of northwest El Salvador. “There were hundreds of sponsored children in my community,” Delbyn says, recalling the Christmas and Children’s Day celebrations.

Sponsored for 12 years, Delbyn received school supplies, shoes, and medical care — a big help for a girl with 10 brothers whose father migrated to the U.S. She remembers making cards and drawings for her sponsor, and in return, “I received special gifts that let me know someone special cared about me.” She loved participating in children’s rights activities; as an adult, she continues to talk about these topics.

But it was through the Betania Club, a World Vision group encouraging sporting talent, that Delbyn “discovered what I wanted to be.”

Betania Club invited about 100 children to train at a facility a little more than a mile away, but the budding athletes had to cross two rivers to get there. Despite that and the occasional rainstorms, the runners loved being in the natural environment, among the pines and coniferous trees.

“My love for sports started there,” Delbyn says. “There were two training shifts, morning and afternoon. It was a pleasant climate, and we had fun. The older [children] encouraged the younger ones.”

The Betania program helped an entire generation of children in the La Palma municipality avoid violence and vices in order to pursue study and sports. Delbyn says, “I can testify that sports are an important tool for society that keep youth from criminal associations and pregnancy at an early age.”

In 2003, La Palma stood out in competition, and Delbyn and her brother traveled to the capital, San Salvador, for training and races. Then the coaching group that partnered with Betania selected Delbyn for a scholarship to study in San Salvador. Through hard work and juggling academics and a job, she earned a degree in physical education.

Since then, Delbyn has visited many countries, but the most memorable competition was the Central American Games in Costa Rica in 2013, in which she won the bronze medal in the 10,000-meter event.

I can testify that sports are an important tool for society that keep youth from criminal associations and pregnancy at an early age.—Delbyn Cartagena

“I was injured during the competition, but I had to go to represent my country,” she says. “I prayed to God for strength because I really wanted to win that medal — it is a national responsibility. I made the effort and won, despite being injured. I was pleased that I made it with the help of God.”

Even as a victorious athlete training at the National Stadium in San Salvador, Delbyn remained humble and concerned for others’ needs. She has donated her trophies to fund races in La Palma, supported women’s and children’s causes, and helped with housing projects and health centers. She also trained people with disabilities, including Gabriela, a sight-impaired athlete who participated in the Special Olympics.

Her goal was to go back to La Palma and coach youth to help them discover their athletic skills — passing on the support that made the difference for her as a sponsored child. The impact of that work continues today, she says: “Although the [sponsorship] program already ended, people keep saying that World Vision helped children’s development in San Ignacio.”

In 2015, Delbyn moved back to La Palma to work as a children’s coach with the National Sports Institute of El Salvador. She married, and she’s now happily expecting her first baby. She will never forget the boost that allowed her to reach her dreams.

“World Vision’s cause is amazing,” she says. “I do not want to imagine a country without organizations like this one.”