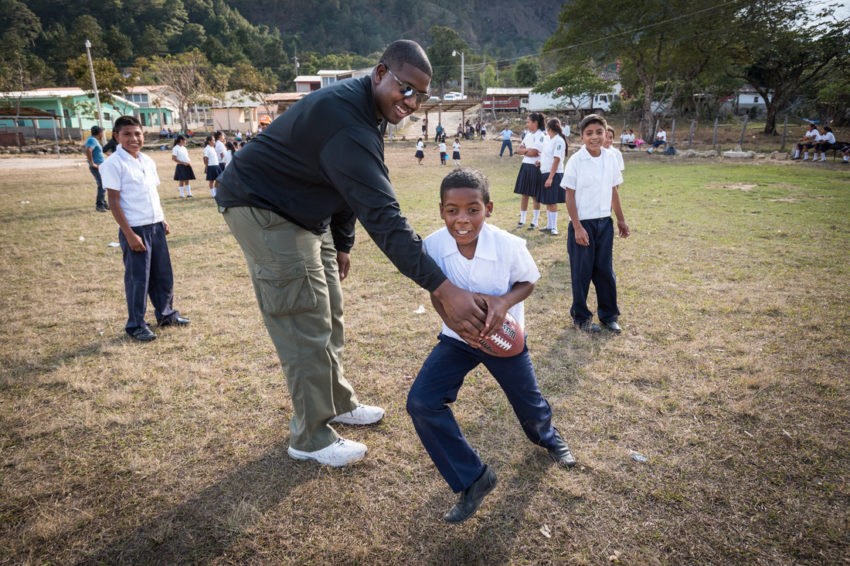 Kelvin Beachum Jr. hands off a pass to a student at a school in San Juan, Honduras. (©2016 World Vision/photo by Eugene Lee)

As a pro football player, husband, and father, my offseason months are precious. So when I traveled to Honduras to see some of World Vision’s work, I wanted to make the most of my time. I knew the Lord was going to do something in me during the trip.

What I didn’t know is that he would give me a clue before I even got on the plane. I arrived at the check-in desk at the airport — without my passport. If I was a preacher, I would say a mini-sermon came to me: What’s the thing that’s preventing you from accessing what God has for you?

For me, it was my passport. A quick trip back to my house solved my access problem. For the kids and families I met in Honduras, their access problem was more complicated. But I saw how World Vision is investing in communities to give people access to education, economic opportunity, clean water, and other ways to live full lives.

… he who began a good work in you will carry it on to completion until the day of Christ Jesus.—Philippians 1:6 (NIV)

On my first day in Honduras, I visited an urban school to see a technology project, which focuses on entrepreneurship and tech skills. The students had made tremendous strides in computer skill development, programming, creativity, and learning about business.

Though they only have a couple of hours of computer time per week, they would have none if wasn’t for this program. These kids are intelligent, and access to technology and the Internet — something we often take for granted — can be the difference between a life of poverty and a life with educational and employment opportunities.

I also visited a rural school in the mountains. Some students walk three hours uphill on dusty roads to reach school, a testament to their enthusiasm and commitment. At a peer-to-peer tutoring session, a 9-year-old named Kevin was helping his classmates with math problems. He has so much potential, and I decided to sponsor him — because what better way to help Kevin access what God has for him?

Kevin’s community’s water tank system was what impressed me the most. It’s part of a World Vision water project and was built by the parents of students, family members, and other community members. The kids took a lot of pride and ownership in that. Now 8,700 people up and down the mountain have access to clean water. Eventually, the project will reach more than 200,000.

The sacrifice of the people who worked on this project is unbelievable. For months, they slept nearby and worked during the day, all to produce a better life for the young people. Growing up, my dad would wake up at 4:45 a.m. to run his automotive business. When I got older, I asked him why he did what he did — long hours, sacrifice, no sleep, little food. He said, “Because I wanted a better life for my kids.”

The people who built the water project not only gave their children access to clean water but access to a better life. Clean water provides ways for people to thrive; it trickles down into all aspects of life.

My last day in Honduras, I visited a community that had come a long way from where it was when World Vision started working there. It showed me how World Vision starts with the very basic needs and then expands the breadth of programs to the extent that people are now starting businesses.

They have an economic empowerment project, which provides savings plans, education for the kids and teenagers, clean drinking water for the entire community, and water for agricultural irrigation. A group of business leaders have opened three coffee shop locations and serve amazing food — the hot chocolate was delicious, and the cornbread cake was to die for.

Several years ago, that might not have been possible. But the potential was always there. The people are hardworking and intelligent. They wanted better things for their kids. So when World Vision planted the seeds, the people did the rest. They just needed access to ideas and opportunities in order to tap into their God-given potential.

Kelvin Beachum Jr. is an offensive tackle for the New York Jets. He and his wife, Jessica, have a daughter and live in Jacksonville, Florida.