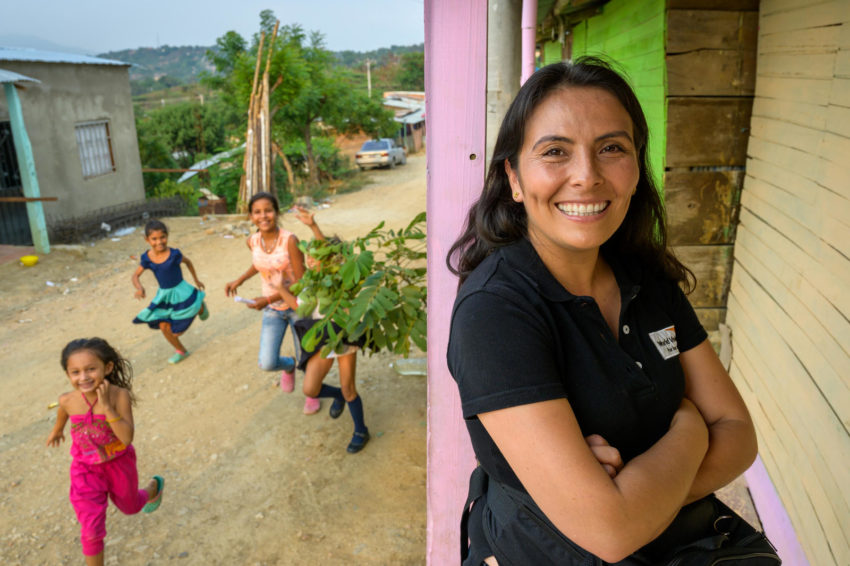 Mayerly Sanchez, World Vision communications manager for Colombia, visits Caracole community near the Venezuela border in Cucuta. As a former sponsored child, she was active in a youth peace movement that was nominated for the Nobel Peace Prize. (©2019 World Vision/photo by Jon Warren) 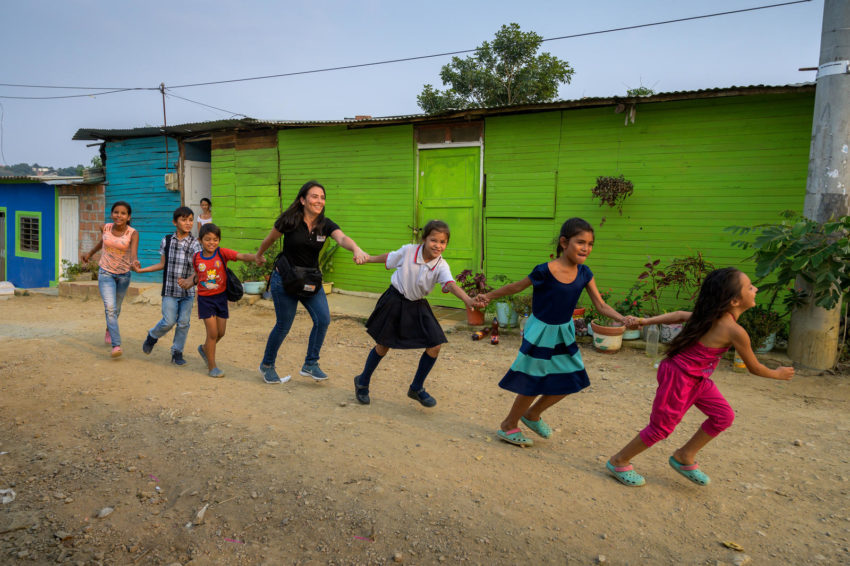 Mayerly plays with children in an afterschool program in a low-income community near Cucuta, Colombia. “Kids are what makes me love this work, says Mayerly, a World Vision communications manager. “These kids have so much more potential than most people realize.” (©2019 World Vision/photo by Jon Warren) 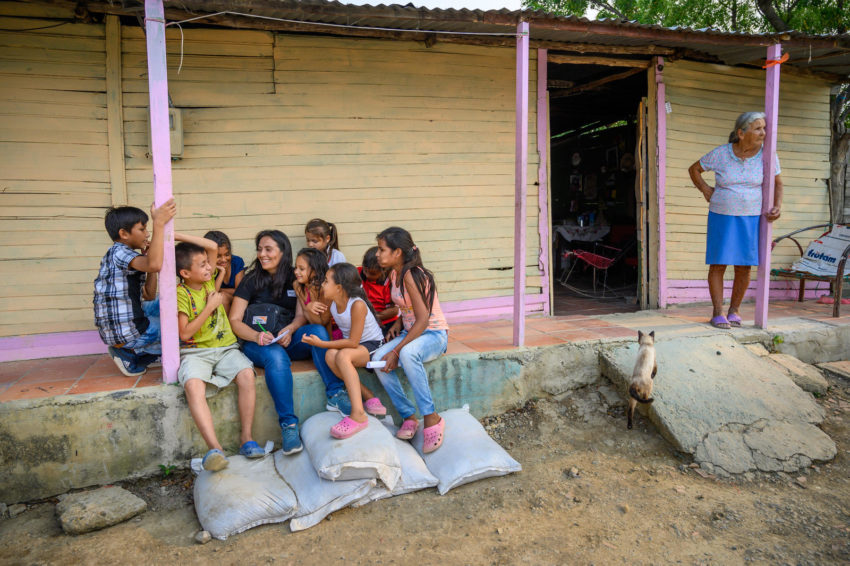 Communications Manager Mayerly Sanchez talks to children in a low-income community where World Vision works in Colombia. “I grew up in a neighborhood like this, a place where people are just getting by and there are few hopes and aspirations,” says Mayerly. (©2019 World Vision/photo by Jon Warren) 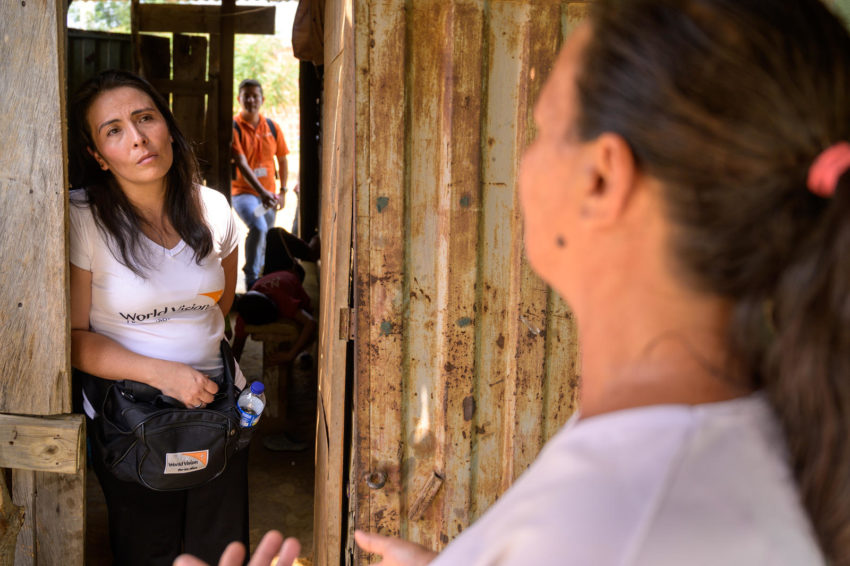 Mayerly Sanchez visits a migrant family from Venezuela that receives food vouchers from World Vision. Years of economic and political instability in Venezuela have led to about 4 million people leaving the country in recent years, the United Nations migration organization says. (©2019 World Vision/photo by Jon Warren)

Mayerly Sanchez shakes her head in sadness as she watches Venezuelans streaming across a border to enter Colombia. Mayerly, a World Vision communications manager in Colombia, hurts for children and families fleeing hardships. In their faces, she sees her young self.

Mayerly grew up during some of Colombia’s most dangerous years. Her family lived in a primarily low-income and violence-prone area near Bogota, the Colombian capital. When she was 6 or 7, World Vision came to her community. “From then, my life changed,” she says. She became a World Vision sponsored child. And though she doesn’t know much about her sponsor, she remembers how important it made her feel that someone outside her family and community believed in her and wanted her to succeed.

“I grew up in a neighborhood like this,” she says, noting the similarities around her: rundown houses on a partially paved road, people just getting by, few hopes and aspirations, and an undercurrent of violence. Violence is still embedded in the country’s culture, Mayerly says, as it was when she was a teenager 20 years ago.

Colombia has been plagued with internal conflict since the civil war of the 1950s, through guerrilla conflicts that began in the 1960s, and continuing with drug- and gang-related violence.

Perhaps most damaging and difficult to eradicate is violence in homes, schools, and on the streets. But Mayerly’s parents taught her by their example to take another path – to love God and serve him by showing love to others. Through a children’s club and activities, World Vision taught her to speak up when she saw others being exploited, to take responsibility for her actions, and to help others. In the early 1990s, with the help of World Vision, she and other kids started a children’s peace club to advocate for these values. They used games and fun activities to steer kids away from drugs, crime, and violence.

Everything she had learned would be put to the test when violence struck closer and her advocacy became personal.

Tragedy and a peace movement

In 1996, when Mayerly was 12, her neighbor and best friend, 15-year-old Milton, was stabbed to death by gang members. “He was like a brother to me,” she says. He had also helped start the peace club. While she was devastated, she knew she had to do whatever she could to make sure it didn’t happen to others. Mayerly poured even more energy into the children’s peace club.

That same year, Mayerly was among 27 youth leaders from Colombia who were invited to a UNICEF children’s peacebuilding conference.  She and two friends, also sponsored children, were elected as spokespeople for the nationwide Children’s Peace Movement. In October 1996, they helped mobilize children to cast votes in a special election called the Children’s Mandate for Peace and Rights. Close to 3 million children, many from violent neighborhoods, voted in support of their right, as children, to live peacefully.

The following year, 10 million adults voted in a peace referendum to support the children’s initiative and call for an end to war. Subsequently, peace was the top issue in the 1998 presidential elections.

Mayerly and her friends organized public rallies, lobbied elected officials, and made public speeches advocating for peace. In 1998 — and for four consecutive years — the Children’s Peace Movement, with Mayerly as a spokesperson, was nominated for the Nobel Peace Prize. In 2001, the organization won the World’s Children’s Prize. With the honors came opportunities for Mayerly to speak in Central America, South America, and Europe, and to the United Nations about peacebuilding, preventing violence, and children’s rights. She met notable world leaders, including Nobel laureates Archbishop Desmond Tutu, Nelson Mandela, and East Timorese politician José Ramos-Horta, who nominated the Children’s Peace Movement for the Peace Prize.

At 17, Mayerly was looking forward to college; she poured her heart into her studies and the peace movement. She painted handicrafts to sell for extra money. Then Mayerly and her family experienced another loss: the death of her father in a tragic vehicle accident.

She was devastated.  “I didn’t know what to do,” she says. She considered giving up on her dream of college and a career and instead going to work to support her family. But when she remembered the love and encouragement her father and mother had given her, she made a different choice.

From World Vision, Mayerly had learned that she could set goals and achieve them. She also learned about different career paths that she didn’t know existed. “I decided I was going to go to college, and I had to find a way to do it for myself,” she says. With scholarships from World Vision and CNN, she went on to a top university, Pontificia Universidad Javeriana, and earned a journalism degree. She followed that with a master’s degree in strategic marketing from Colegio de Estudios Superiores de Administración (CESA).

She studied journalism so she could get close to people and hear and amplify their voices, especially children in need. She studied marketing to learn how to reach people with information they need to make good decisions and make an impact with what they do. Her education gives her the tools she needs now to build on her childhood resolve to be a lifelong peacemaker.

Regardless of her job, Mayerly says, “I’m a peacebuilder; that’s my life’s work.” Love is the motivation at the heart of everything she does, and she hopes that by sharing children’s stories, it will make a difference in their lives.

The peaceful life that she advocated so hard for has become her reality. Now 35, Mayerly is married to Carlos Andries. “I met my soulmate,” she says, while working at World Vision. They have two children, Maria Jose and Isabella, ages 5 and 2, who are growing up in a more peaceful country. Homicide rates are at a 40-year low, though still five times higher than the U.S. But they enjoy the peace, security, and innocence that eluded her childhood.

And in her communications work for World Vision, she continues to use the power of words to change her country and advocate for children.

She says, “With love, everything is different in your life.”