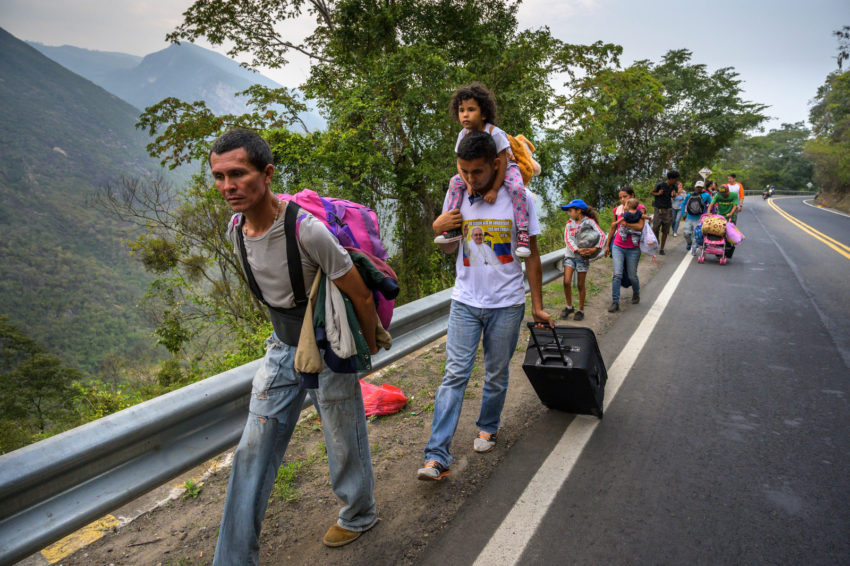 A group of Venezuelan migrants walks together for safety. Some had been on the road for 18 days before crossing into Colombia. The next leg of their journey will be the most difficult. They’ll be climbing the steep roadway to elevations up to 12,000 feet, where the temperatures can be below freezing. Two of the children are younger than 6 months old. “This is what happens when you can’t make enough money to feed your family. You have to leave any way you can,” says the group leader. (©2019 World Vision/photo by Jon Warren) 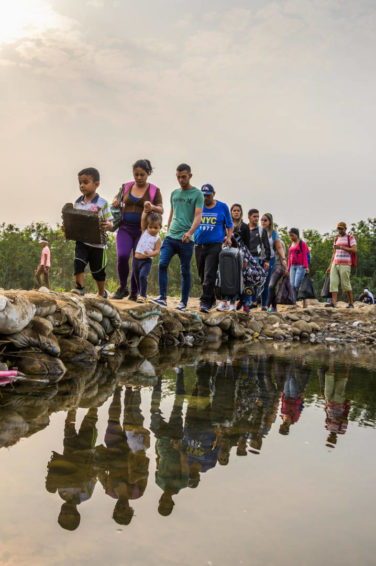 Venezuelans emerge from the woods to ford the Tachira River and cross the border illegally from Venezuela into Colombia near Cúcuta. On the Venezuela side, they pay a small fee to be allowed to pass on the trails. When the border is open, 35,000 to 45,000 people are estimated to cross over daily, most for work or to attend school. Every day, about 5,000 people don’t return to Venezuela. Instead, they try to find work or move on to other countries nearby. (©2019 World Vision/photo by Jon Warren) 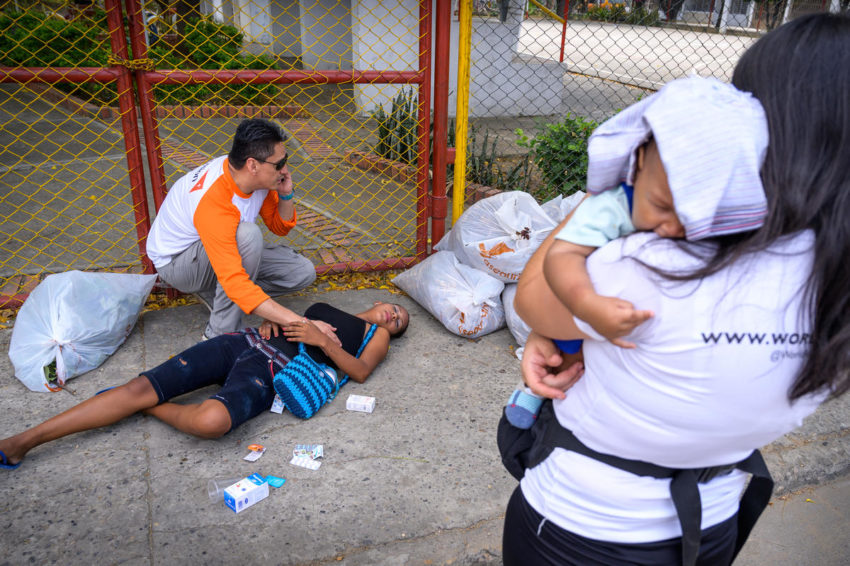 A woman fainted from hunger about a block from a free health clinic for Venezuelan migrants. World Vision staff member Mayerly Sanchez held the woman's baby while Jorge Alejandro Castaneda, a World Vision response manager, assisted the woman and called for help. She was escorted back to the clinic where the staff gave her food and fluids and let her rest. (©2019 World Vision/photo by Jon Warren) 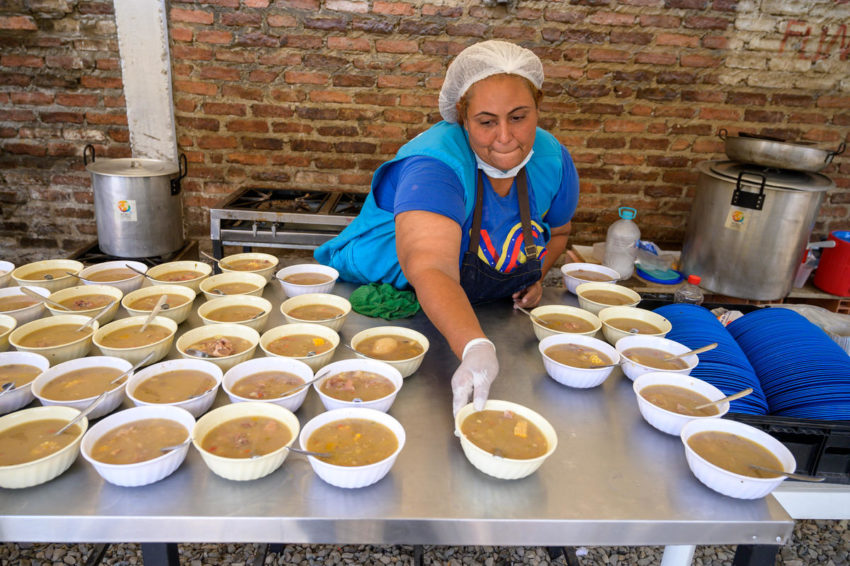 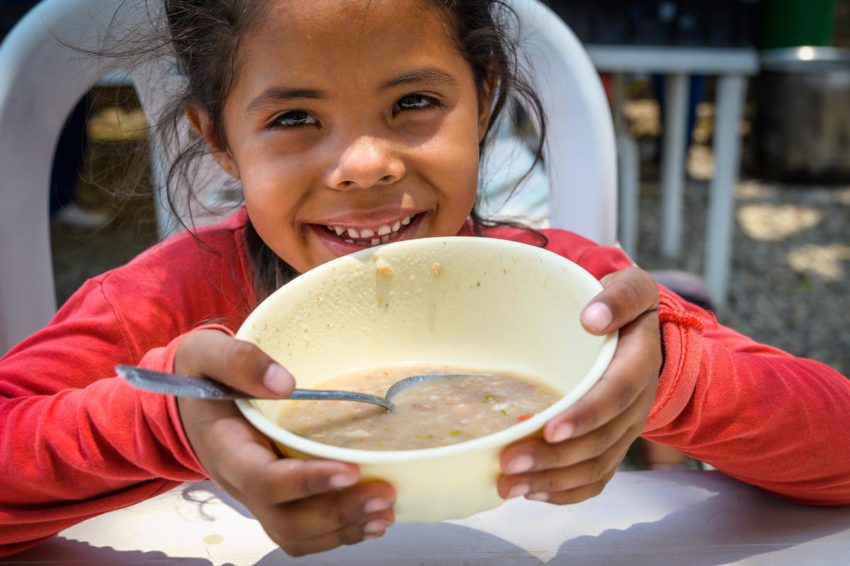 A girl enjoys a hot bowl of soup at the soup kitchen. (©2019 World Vision/photo by Jon Warren) 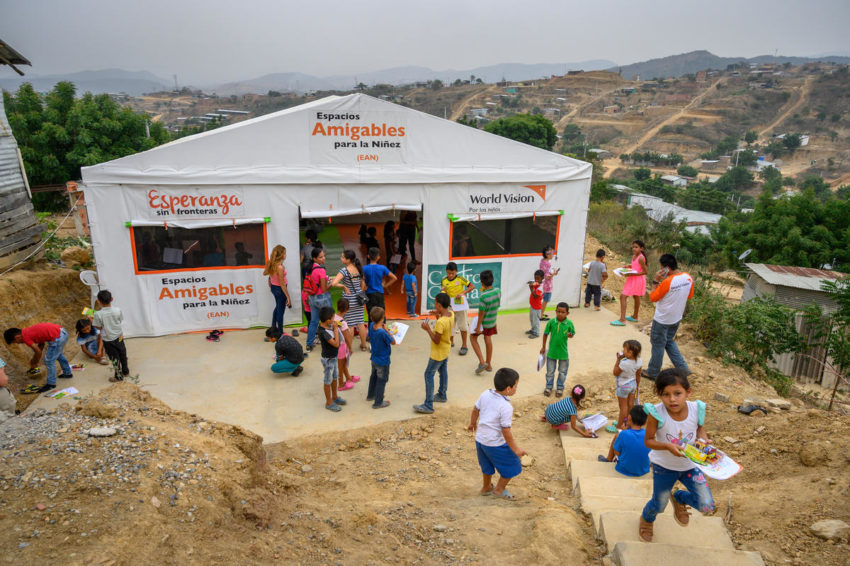 Happy children and their parents leave the Child-Friendly Space in the El Talento neighborhood of Cucuta, Colombia, where about 80% of the population are Venezuelan migrants. (©2019 World Vision/photo by Jon Warren) 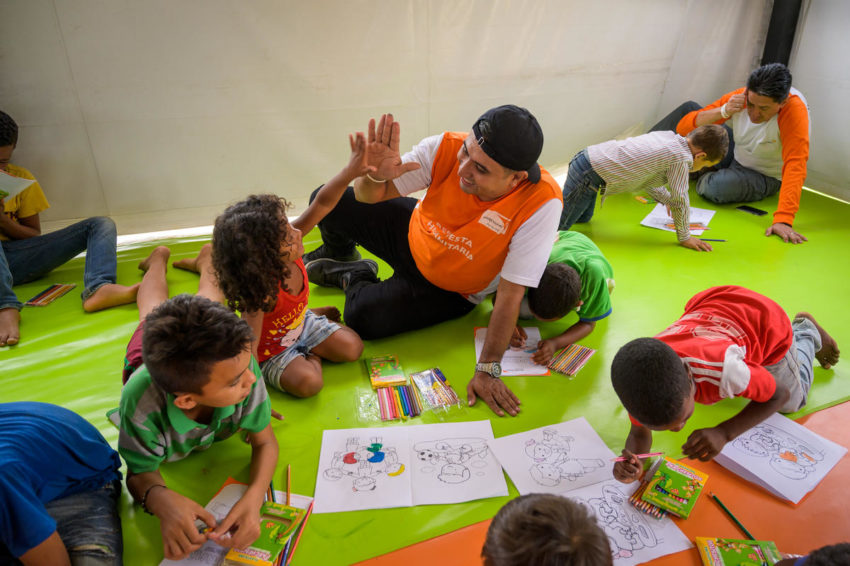 Venezuela is in crisis. The economy has collapsed, and an uprising of political opposition to President Nicolás Maduro has put the country’s leadership in question. More than 6 million refugees, asylum-seekers, and migrants from Venezuela have left the country seeking food, work, and a better life.

Latin America’s largest migration in recent years is driven by hyperinflation, violence, and food and medicine shortages stemming from recent years of political turmoil.  One out of every three Venezuelans is food-insecure and in need of urgent food supplies, according to the World Food Programme (WFP). Once-eradicated diseases like cholera and malaria have returned, and children are increasingly dying of causes related to hunger and malnutrition.

The COVID-19 pandemic has compounded the country’s humanitarian and economic crisis. Borders with neighboring countries have shut down, schools closed, and hospitals have struggled with staff shortages and supplies. Venezuelan migrants who returned to the country after losing their jobs abroad in the wake of the pandemic have been unable to earn wages back home. Shortages of fuel, electricity, and clean water have sparked riots and left many migrants with no choice but to flee again.

In Latin America and the Caribbean, hundreds of thousands of Venezuelans have been granted residence permits that allow them to stay in other countries. An estimated 1.8 million refugees have settled in Colombia, the country hosting the second-largest number of people displaced across borders. Turkey hosts the highest number of refugees — 3.7 million, most of whom are Syrian refugees.

While the influx from Venezuela has caused tensions in host countries, it’s also brought out their hospitable spirit. Still, needs among families in transition are great.

FAQs and facts about the Venezuela migration crisis explained

Explore frequently asked questions and facts about the economic crisis in Venezuela leading to mass migration, why people are migrating, and how you can help children and families affected.

How many people are affected by this crisis?

More than 6 million Venezuelans from every walk of life have left the country since 2014. They’ve left to find work, food, better healthcare, and stability.

Why is Venezuela in crisis?

The reasons Venezuela is in crisis are years of hyperinflation, violence, and food and medicine shortages. The country was once considered the richest in Latin America, thanks to having the largest oil reserves in the world. But more than a decade of declining oil revenue and poor governance led to the collapse of the national economy, and the government has not been able to provide adequate social services.

Where are Venezuelans going?

Most Venezuelans are fleeing to neighboring countries. Of the 5.4 million people who have left Venezuela, the majority have remained in Latin America and the Caribbean. The highest concentration of Venezuelan migrants is in Colombia, where more than 1.8 million of them have relocated.

How is the Venezuela crisis affecting children?

Children are among the most vulnerable in this crisis. As food stocks dwindle, children are at greater risk of hunger and death. And they face a greater danger of exploitation and harm while in transit with their fleeing families. Many children who’ve left Venezuela with their families need immediate humanitarian aid, according to World Vision staff leading our response to the crisis. Girls often face gender-based violence and a greater risk of trafficking in fluid, mass-migration situations like the Venezuela crisis.

Read what young Venezuelan migrants say about their daily lives and the COVID-19 pandemic in World Vision’s report, “Venezuelan Children Between a Rock and a Hard Place.”

What’s the difference between a migrant, a refugee, and an asylum-seeker?

A migrant is different than a refugee. But either can seek asylum outside their country. The United Nations Refugee Agency explains: Refugees are forced to flee to save their lives or preserve their freedom. Migrant describes any person who moves, usually across an international border, to join family members already abroad, to search for a livelihood, to escape a natural disaster, or for a range of other reasons. Refugees are protected by international law. But migrants are subject to the unique laws and processes of the country they move to.

The Venezuela crisis consists mostly of migrants and some refugees fleeing threats of violence, but hundreds of thousands of Venezuelans have received legal asylum in their new host countries.

How is World Vision responding to the Venezuela crisis?

World Vision has maintained a multi-country response to the Venezuelan migrant crisis since January 2019. We’ve reached more than 865,000 people through programs focused on child protection, education, and food security and livelihoods in Bolivia, Brazil, Chile, Colombia, Ecuador, Peru, and Venezuela.

Venezuelan migrants’ needs are increasing amid the continuation of the COVID-19 pandemic. Many of them are struggling to find jobs and live in poor conditions that pose a high risk for contracting the disease and suffering its secondary economic and social effects. World Vision’s cash transfers and food aid have become a vital lifeline.

How can I help people affected by the Venezuela crisis?

You can help Venezuelans by remembering them in prayer and helping World Vision meet their needs.

1920s to 1970s: Oil is discovered in Venezuela, which is found to have the world’s largest reserves. The nation’s economic development is based on rising prices and profits in oil exports.

1998: Hugo Chavez, former leader of a 1992 coup attempt, is elected president. He promises to use the country’s oil wealth to improve the lives of the poor.

2010 to 2012: Chavez’s attempts at economic reform — currency devaluation and price controls — are ineffective.

2013: After 14 years of rule, Chavez dies of cancer at age 58. Chosen successor Vice President Nicolás Maduro assumes the presidency and narrowly wins an election. With inflation at more than 50% a year, the National Assembly gives Maduro emergency powers for a year, beginning in November.

2014: Public spending is curtailed because of low oil prices. Anti-government protests are broken up with force.

2016: The economy is in crisis, and the healthcare system lacks funding. Hunger and malnutrition, maternal and child mortality, infectious diseases, and unemployment increase alarmingly.

2018: Maduro wins the presidency again in a low-turnout election that was seen by many countries as fraudulent because of low participation by opposition parties. To tackle hyperinflation, the government slashes five zeroes from the face value of its old currency and ties the new “sovereign bolivar” to a cryptocurrency that can’t be traded. In November, the U.N. estimates that 3 million Venezuelans have migrated because of the economic crisis and shortages in food and medical care.

2019: Maduro is sworn in for his second six-year term. As opposition leader and head of the National Assembly, Juan Guaidó declares himself to be interim president according to the constitution. He is recognized as such by the U.S., Canada, and Venezuela’s Latin American neighbors.

2020: As the coronavirus pandemic spreads in Latin America, border closings and the collapse of global oil prices have made life even harder for Venezuelans.

2021: By the end of 2020, Venezuela accounts for 6 million refugees, asylum-seekers, and migrants, remaining one of the world’s largest displacement crises.