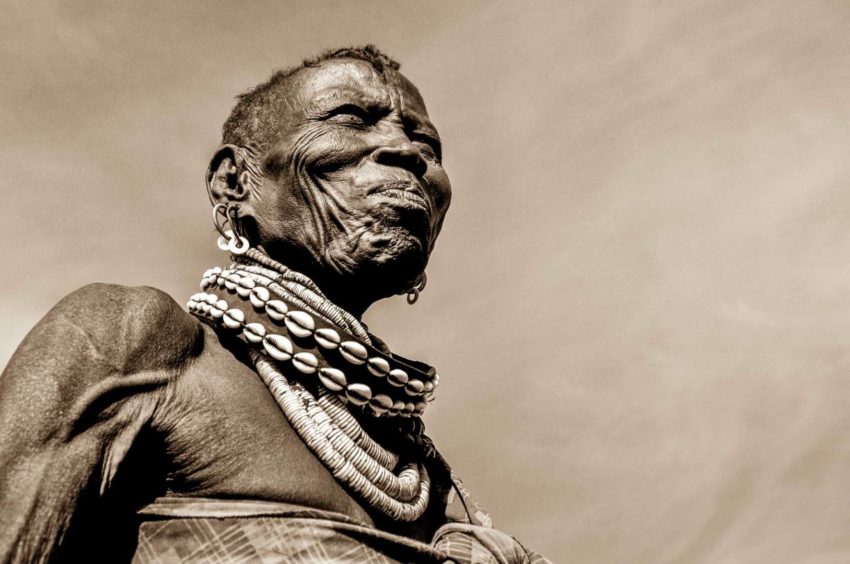 Nine years ago, our writer Kari Costanza lived with a family for five days in Turkana, Kenya during a time of hunger. They shared their lives with her; they shared their hunger and poverty with her.

In April, she reconnected with this family while visiting a new time of hunger. Read how a life of abject poverty does not preclude a life of spiritual plenty.

In April, photographer Jon Warren and I flew to Turkana, Kenya, to report on the drought that’s swallowing up lives and livelihoods in East Africa. It’s a monster crisis, affecting 25 million people across the region. I was shocked by what I saw: the carcasses of dead animals gleaming white against the brown sand, bone dry river beds, and clinics filled with crying, severely malnourished babies in the arms of their worried mothers.

Every sight along the way left me distressed. I love the people of Turkana. They are my family. In 2008, a community in Turkana hosted Jon and me during a time of hunger. We stayed with a family in their hut for five days, eating food rations to find out what hunger felt like, documenting our visit on video.

The matriarch of the family was Ekomol. Ekomol did not know her age, and I couldn’t even guess. She had two sons, Ekomoli and Peter, who lived in nearby huts with their families. Jon and I grew so close to the families. They protected us and shared their food rations with us. We got a sense of how hunger doesn’t just make you hungry. Hunger makes everything that much harder.

Ekomol invited us to her church. We sat on rough-hewn pews surrounded by walls of corrugated metal. When it came time for the offering, Ekomol had just a few, small crumpled Kenyan shillings to add to the plate. But she danced to the altar with the offering plate held high, as beautifully elegant as a crested crane waltzing in a field. She told me God had transformed her. You could feel her peace and joy, even in a time of hunger.

In April, after covering tough stories for a week and a half — visiting a home now headed by children whose parents died because of drought, mothers who could no longer breastfeed their babies, people from young to old speaking openly about how they feared death — we asked our driver if we could go find Ekomol and her family.

The family greeted us with hugs, but there was something missing. Ekomol’s hut was empty. She had died on March 15. We had missed her by just one month. Like the others in East Africa, their family had not escaped the ravages of the drought. Peter was stick thin. Ekomoli’s hair had grayed. The girls were in school, but their parents were concerned that they will have to drop out because there was no money left.

I had learned so much from Ekomol during our time with her — how she cared for her family and the land around her. How she trusted God with everything, even though the family had nothing. I had watched her share food rations with her neighbors and with us. I had felt her strength during a time of hunger that would bring most people to their knees.

Isn’t that what Matthew 25:40 commands?  That how you stay well with everybody is how you stay well with Jesus. That’s what Ekomol did. She welcomed us and made sure we were fed. She provided a cowhide to sleep upon. She asked about our health and well-being. And she unlocked new ideas in our minds — how a life of abject poverty does not preclude a life of spiritual plenty.

Ekomol may be gone, but her words sound in my heart: Stay well with everybody. It’s a fitting picture of God’s economy — that this remarkable woman considered among “the least of these” was the one who taught me the most.

Join World Vision in supporting “the least of these” as we work to give food to those who are hungry across Africa. Donate to our Africa hunger crisis fund today. Through grants, your donation will multiply seven times in impact.

You can also sponsor a child in Kenya and help build lasting resilience for children and their families and communities.