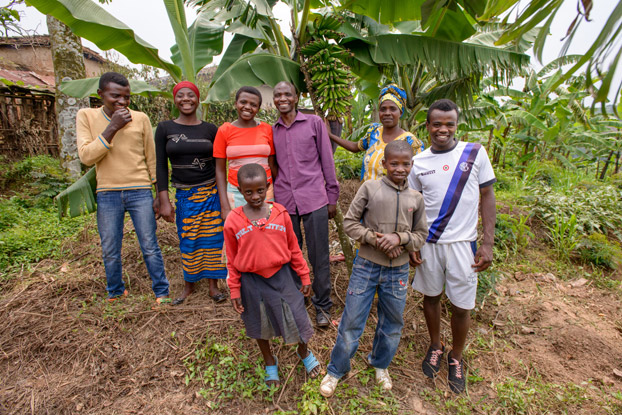 Vedaste Nyunvira is a model farmer in Rwanda. The farming techniques he is learning through the Resilient Livelihoods program have significantly increased his crop yield. (©2015 World Vision/photo by Jon Warren)

An idea that began in a rice field in Tanzania is today building resilient livelihoods for farmers across five countries in Africa — empowering their families to grow greater together through transformation and forgiveness.

Find out how this innovative program works!

Putting families first is the hallmark of Resilient Livelihoods, an innovative economic empowerment program developed by World Vision in Tanzania. At the heart of it all is helping families and communities realize that they are greater together than apart.

It was an idea that blossomed in a rice paddy.

In his first five months on the job as World Vision Tanzania’s National Director, Tennessee-born Tim Andrews was determined to visit every project in the country, spending a total of only two hours at his desk in those first months.

It was in 2010, while standing in a rice paddy with a farmer, that Tim had an epiphany. Her harvest was good, but the woman was dejected. She knew rice traders would take advantage of her as a solo farmer once again. The woman’s farm had a large irrigation system and fairly predictable weather. She should be a successful farmer.

“I’m standing in the Garden of Eden,” Tim remembers thinking, “and the devil is still in control.” To wrest control from the devil would take a strategy based on experience, innovation, and prayer.

“I prayed with and listened to a multitude of wise counselors,” says Tim, “World Vision global, regional, and local leaders, external consultants, and profoundly so — the community members themselves.”

Resilient Livelihoods is based on three pillars: support for smallholder farmers, protecting natural resources, and creating safety nets for vulnerable families to help them withstand the unexpected.

The three pillars are secured within an essential underpinning: empowerment. Through empowerment, Resilient Livelihoods helps people rethink their circumstances and reshape their worldview — helping them understand that they can achieve what before had seemed impossible.

“Celebrating Families transformed my life,” says Mrindwa. “I was before like a lion,” he says. “My wife would run. My children would hide. Now I am a friend to my family.” And the soft-spoken farmer has become a friend to his community.

Resilient Livelihoods has now spread to other countries, including next-door neighbor Zambia. The program continues to put families first, working in areas where World Vision child sponsorship is building a solid foundation.

Patrick and Harriet Kaseko used to live in an unhappy home, but now everything has changed. The couple lives in Kasama, Zambia, with their three children, including Makumba, who is 24.

In the worst of times, they used violence to discipline their children. They beat them and called them terrible names.

World Vision chose Patrick and Harriet and 43 other couples to participate in Celebrating Families. The couple entered training not knowing what the outcome might be. “We found out that Celebrating Families brings families together,” says Patrick. “Before, there wasn’t communication between children and parents. We realized that children are a gift from God.”

Through the training, Patrick and Harriet learned that abuse was wrong. “We used to discipline them using corporal punishment,” says Patrick. They would flog their children with two to three strokes. “We were so tough in treating our children,” he says.

The couple learned a different way. “We learned from Celebrating Families that there are seeds of goodness in each person,” says Patrick. “Each person is made in the image of God. They are not wild animals. They are human beings who think. After four days, we knew family was important. It is the basis for everything.”

“This workshop helped my husband and I to have a close relationship,” says Harriet. “We are friends. [Now the children] don’t fear us.”

“It wasn’t easy,” admits daughter Makumba. “They said they were sorry. They talked about the beatings, the bad words. Everything.”

Makumba and her brothers left the house, stunned. “We had a separate meeting outside,” she says. “We realized these people are human. They realize they were wrong. Who are we to say no?”

The children came back inside with their answer. “We said, ‘You can’t do those things again.’ Things have changed. Three months later, we still saw a big difference. Things have really changed. They let us speak our minds.”

The family gathers near a table where Patrick used to keep a whip. “Are we still on probation?” asks Patrick of his beautiful daughter.

“You are completely forgiven,” says Makumba.

The table now holds a Bible instead of the whip.

Makumba has kept the letters from her parents.

“These letters will help my future when I have my own family,” says Makumba.

An idea that blossomed in a rice paddy is now taking root in countries such as Zambia, Malawi, Rwanda, and Mali — helping families grow greater together.

Together, we can be greater than hunger. Join us in helping families and communities be more resilient to hardship — Sponsor a child in Zambia today!