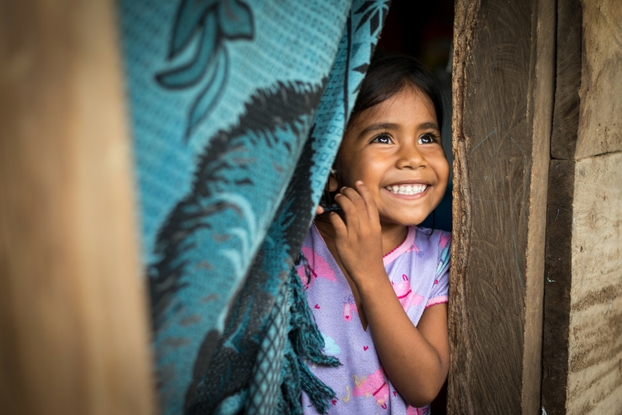 5-year-old Nicole in Nicaragua was underweight for her age, but therapeutic food and cooking for better nutrition have her healthy and active again! (©2015 World Vision/photo by Eugene Lee)

When it comes to children’s nutrition, food quality is more important than quantity. Without the right foods, malnutrition can still limit a child’s development and weaken his or her immune system.

See how new recipes and cooking techniques are helping to keep children healthy in Nicaragua!

Often the picture of severe malnutrition is a child from Africa with a thin body or distended belly. However, in Central America the issue can go unnoticed.

Even though many children may eat enough to feel full, the lack of nutrients contributes to weaker immune systems and limits mental and physical development. Malnourished children are more likely to get sick and not perform as well in school.

In Nicaragua, mothers participate in nutrition workshops led by World Vision health staff called Common Pot. In these groups, mothers learn to cook with more nutritious — and less expensive — ingredients, such as soybeans and fresh vegetables grown in community gardens.

Here, one mother — Anna in Cocibolca, Nicaragua — learns to adapt a current recipe with nutrient-rich items during a Common Pot nutrition workshop.

“Now I have learned how to cook rice and lentils and I have prepared it here and at home for the children,” says Anna, whose 3-year-old son is overcoming being underweight.

The World Bank classifies Nicaragua as the second poorest country in the Latin America and Caribbean region, and the World Food Programme estimates that chronic malnutrition affects 22% of children under 5.

At another nutrition group in Larreynaga, Nicaragua, plantains are fried for lunch.

“It [the new cooking techniques] can prevent illness with children. This is important to pass on the trainings to the children,” says Geraldine, the facilitator of one Common Pot group.

Children eat a rice, bean, and lentil lunch at the home of Francisca, the guide mother of one nutrition group in Cocibolca, Nicaragua.

“When they [children] come to the Common Pot, they get a better diet,” she says.

Sponsorship also funds the planting of community gardens. Above, World Vision Childhood Facilitator Victor Garcia inspects a squash plant with fourth to sixth grade children at Ruben Dario School. This school garden is used to teach children and parents the basics of growing healthier foods such as carrots, cucumbers, onions, and tomatoes.

“Recent studies have shown vegetables are not part of the normal diet [in this area],” Victor says. “We are trying to improve the diet habits in families in rural and urban areas.”

At first glance, 5-year-old Nicole appears to be normal, but she is short for her age and extremely underweight.

At one point, she weighed only 23.8 pounds. For comparison, my son of the same age weighs 40 pounds.

“I felt worried because I knew that there was a problem with her weight,” Nicole’s mother, Reyna, says. “She was not that active. She didn’t finish her meals.”

Through World Vision’s health monitoring program, Reyna was given a short-term supply of emergency therapeutic food to quickly get Nicole’s weight up.

At the same time, Reyna was also referred to a Common Pot mother’s group to learn better long-term nutritional habits.

“Now I can see she’s running and more active,” Reyna says. Nicole’s weight is on the upswing. “I really hope she can continue studying and become somebody.”

Help support a child’s health and nutrition! Choose a child to sponsor in Nicaragua.