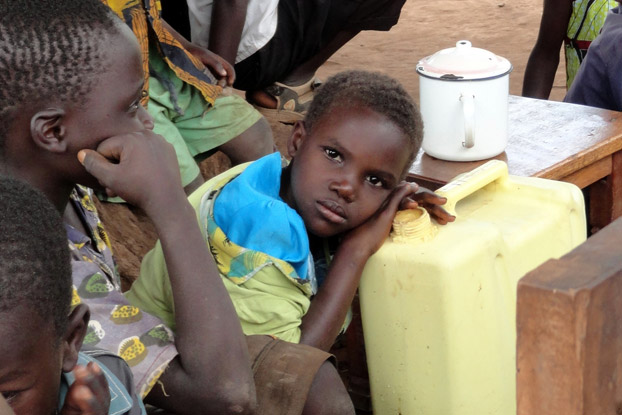 This summer, blogger Rachel Teodoro traveled with us to Uganda to dedicate a new borehole for one of our communities.

Through her eyes, witness the energy and pure joy that the people felt at having clean water, and learn how they will be forever changed by it.

I was crying before we even got out of the van. The crowd was at least 200 strong. We could hear the singing. We could feel the joy of the songs being sung. Words we didn’t know, sounds we weren’t familiar with, but smiles and expressions that didn’t require the same language to understand that they radiated a thankfulness and joy unlike any I had heard. There were mothers with babies on their hips and children of all ages. Even men stopped their afternoon work and came out to this celebration. They were gathered to dedicate a borehole.

Before I left for my trip with World Vision to Buliisa, Uganda, people would ask me what it was we would be doing. I had to explain that we weren’t doing, we were seeing. Seeing the work World Vision was doing in the community that is worlds away but has become my place. The place that I have become the most educated on in the African continent that I have grown to love. A place that I could have only dreamed of, but never thought I would be able to actually see.

This place holds the two children our family sponsors. This place is the focus of our famine awareness season in May as our church raises awareness and funding for the WASH program (water, sanitation, and hygiene) in Uganda through a kid famine, 30 Hour Famine, and our annual walk for water. And now, I was standing in this place.

Little children gathered around wanting to shake our hands. It was humbling because I had done so very little and yet they were thankful for the people who had provided access to clean water in their village. It was like we were wannabe rock stars who didn’t even realize our album was getting airtime. You see, this wasn’t a borehole that should have even been drilled. Several months prior to drilling, the Ugandan government put a stop to any further borehole drilling because of high salinity. A memorandum of community agreement had to be signed by the local government. Then when the drilling was able to get started, it was found that the land that had been set aside was not large enough.

The land that had initially been set aside was very close to the school property. The children would have easy access to the borehole during their school day. But God had other plans. When a local farmer heard about the inadequate land issue, he stepped up and donated a portion of his land to the community. And while the borehole isn’t on school property, it’s now a short walk down a safe path. It’s now also conveniently located where three villages have access and the borehole serves over 1,000 people! The water pressure is so strong that there is talk of having the well become mechanized so water can be supplied through a pipe distribution network that will reach even more people. He is able to do far more than we can even ask or imagine! Can I get an amen?!

Before we walked down to the borehole, the community children had a presentation for us. There were several poems, skits, and traditional songs and dancing. I immediately noticed this little boy. His name is Stephen. Stephen is 12 and as we walked down the path to the borehole, he slipped his hand into mine. He told me that he doesn’t have a tie, but he felt like a special day like this required him to make one for himself out of notebook paper.

As we reached the borehole, a gentle rain started falling. The community members gathered around us couldn’t stop talking about how uncommon this slow steady rainfall was. A young girl was standing, almost at attention, holding a tray with scissors in front of a twine rope. She took her job very seriously, and we felt quite honored to be a part of this day.

Two of the members on our trip have been on their own personal crusade to raise funds for the WASH program in Uganda. Several years ago, Ted and Paula Kramer lost their son Michael to a drug overdose. They realized that their son died of a disease that was preventable, and that there are nearly 1,600 children under the age of five that die every day because of preventable diseases related to unclean water. They wanted to keep Michael’s memory alive by bringing clean water to children and their families.

Dedicating that borehole in this remote village in Uganda is a memory that will be forever etched in my mind. I turned around and saw the faces who are being served by this water. Babies that haven’t breathed their first breath and elders that are close to breathing their last. A community that will forever be changed by clean water.

This group of five is called the WASH committee. These community members have been trained in pump maintenance and repair as well as financial and environmental management. They are the reason World Vision has such a high sustainability rate with the wells and boreholes. They are the ones who should be getting the handshakes and special presentations. These are the real rock stars!

Simply providing access to safe drinking water opens the doors to an invitation to experience the real living water of eternal life. It changes a community from surviving to thriving. To give water is to give life. Won’t you consider giving life today?

Rachel Teodoro is a wife, mother, blogger, runner, and Jesus follower living in the greater Seattle area. Rachel fills her days substitute teaching, writing about her daily life with a focus on home and family and volunteering whenever she can. She is excited about doing a real walk for water in Zambia this month and then bringing that experience back to her church family as they raise awareness for the fourth year to the need for clean water and child sponsorship at a walk for water 6K event in May in preparation for her first Team World Vision half marathon this summer.

Rachel’s church projects and Team World Vision team raise money to help children around the world through social fundraising. You can set up your own fundraising page for clean water here.

What you do today could change a child’s tomorrow! Nearly 1,600 children under age 5 die every day from diarrhea caused by dirty water, poor sanitation, and improper hygiene. Sponsor a child in a community in Uganda that desperately needs access to safe water, and be a key part of World Vision’s work to provide a new person with clean water every 30 seconds.

As your child’s only sponsor, you can encourage them through your prayers and correspondence while helping their entire community thrive — not only with safe water, but also through basic healthcare, education, economic opportunities for their families, and a full life. The kind of life God intends.