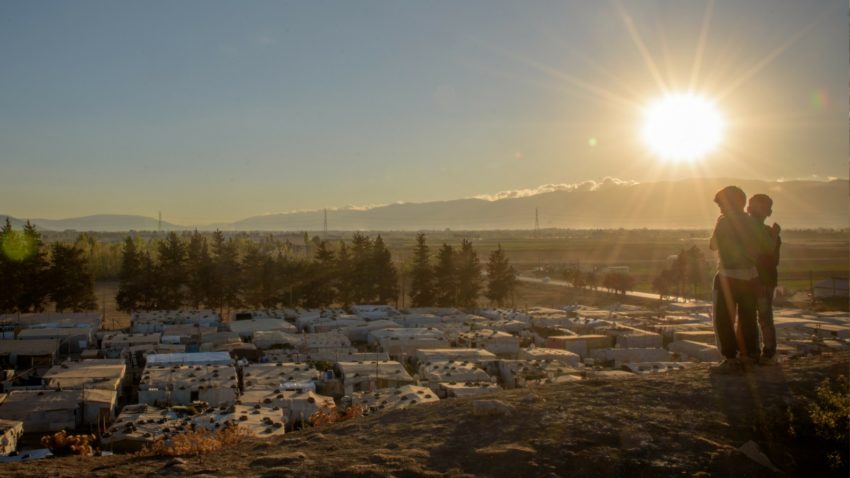 It’s only because we’re loved and forgiven that we can love and forgive others. Pastors in Lebanon’s Bekaa Valley demonstrate this in their care for refugees. “If you love honestly,” one pastor says, “an enemy will turn into a friend.”

This Thanksgiving, World Vision U.S. President Rich Stearns challenges us all to look at generosity differently.

Today kicks off our annual season of generosity, when we lavish gifts on our loved ones. It’s satisfying to be generous to friends. But here’s a heavy question for the holiday: What about our enemies?

Imagine that on Thanksgiving, your doorbell rings. There on your doorstep stands someone who has harmed you. He’s hungry and thirsty. What do you do?

As a Christian, I know what I’m supposed to do. I should give him something from my table — maybe the driest slice of turkey, some asparagus that nobody’s going to eat anyway, a glass of tap water. I’d prefer to slam the door on his face, but I read my Bible, and I know better. Romans 12:20 says, “If your enemy is hungry, feed him; if he is thirsty, give him something to drink.”

The verse goes on, “In doing this, you will heap burning coals on his head.” This sounds pretty good to anyone who has been wronged. It implies that aiding an enemy is a way to shame or spite him.

But taken in the context of the preceding verses, it’s clear that we need to do better than that. “Bless those who persecute you; bless and do not curse” (verse 14). “Do not repay anyone for evil” (verse 17). “Friends, do not avenge yourselves; instead, leave room for God’s wrath” (verse 19).

Recently I heard an illuminating interpretation of the burning coals reference from noted New Testament scholar Kenneth Samuel Wuest. He explained the importance of fire in biblical times for heat and cooking. Back then, you were really out of luck when your coals went cold. Your only option was to beg some burning coals from a neighbor, which in those days you carried home in a container on your head. Your neighbor would have to be pretty generous with those coals so that a few would still be burning by the time you arrived home. “The one injured would be returning kindness for injury,” Wuest summarizes.

Loving our enemy is one of the most difficult challenges of the Christian faith. It’s countercultural nearly everywhere. And I’m convinced that we can’t do it unless we tap into the better nature we acquire when we follow Christ.

I’ve seen powerful examples of this among Christians in the Middle East. A few months ago, I returned to Lebanon, where churches are “returning kindness for injury” to the enemies on their doorstep.

Here again, context is important. Lebanon, a small country of 4 million people, is straining under the burden of more than 1 million refugees from neighboring Syria. It would be hard enough to manage the economic and social impact of so many people needing so much help, but add to that the emotional impact that Syria was once Lebanon’s oppressor. Syria’s military entered Lebanon in 1976 as part of a peacekeeping force during Lebanon’s civil war but stayed after the war ended — 15 years longer, wielding control over Lebanon’s affairs.

Imagine having a foreign military patrolling your streets and undermining your officials. That was Lebanon’s reality until Syrian forces pulled out in 2005. And then just six years later, Syrians returned as desperate refugees fleeing their own civil war.

The Christian leaders I met in Lebanon were not saintly or superhuman. They lived through the occupation, and they once shared the prevailing view that Syrians were their enemies. But when their neighborhoods swelled with unwanted and unwelcome refugee families, they chose to react not as Lebanese nationals but as citizens of Christ’s kingdom.

The pastor of a church in the Bekaa Valley, a World Vision partner, told me that when they started helping refugees five years ago, many people questioned why. “Our response was, ‘Because of the love of Christ we carry in our hearts, we assist them,’” the pastor says. “We tell the refugees, ‘We don’t care what happened in the past. We care about the well-being of you and your children.’”

With support from Lebanese partner MERATH and World Vision, his small congregation runs education programs for hundreds of refugee children, distributes food and items like diapers to families, and provided a generator for a refugee settlement. The church building itself stands unfinished — I’m sure construction would be complete if they weren’t so wrapped up in refugee outreach.

Churches like these in Lebanon are demonstrating the guileless generosity described in Romans 12 — meeting their enemies’ needs and helping them keep their fires lit. They do it not out of spite but to reflect the character of Christ.

After all, God was incredibly generous to us by giving us Jesus, who rewrote the code on love. It’s only because we’re loved and forgiven that we can love and forgive others — and overturn a history of hurt. “If you love honestly,” the Bekaa Valley pastor says, “an enemy will turn into a friend.”

This Thanksgiving, challenge yourself to look at generosity differently — as more than a rote ritual of the season, but an opportunity to “overcome evil with good” (Romans 12:21).

As you reflect on gratitude this Thanksgiving, how can you pass the generosity shared with you on to others? Comment below!

Learn more about how your generosity can shine bright with the world.