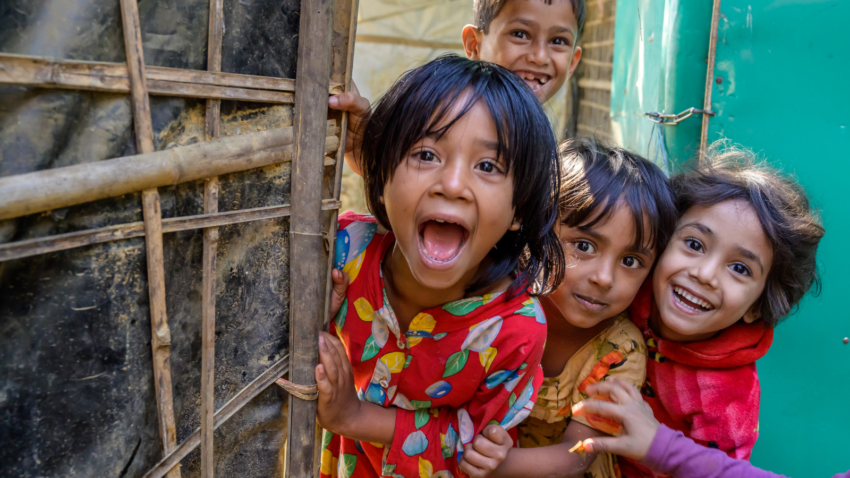 Children play in the refugee camps in Bangladesh. (©2019 World Vision/photo by Jon Warren)

Kindness, dignity, and hope might not be the traits you’d expect to find in a refugee camp. World Vision writer, Kari Costanza, didn’t either. But when she visited the world’s largest refugee camp in Bangladesh, she was surprised by the hope she found there.

Here are five signs of hope she never expected to find among Rohingya refugees.

Some of the world’s hardest stories take place inside refugee camps. They are places of heartbreak populated by people who have run for their lives, often leaving everything behind and losing family members along the way.

I’ve heard devastating stories from Somalian refugees in Dadaab, Kenya, once the world’s largest refugee camp. From Syrian refugees living in Lebanon and Iraqi Christians in the Kurdistan region of Iraq. From refugees from the Democratic Republic of Congo living in Rwanda and internally displaced Congolese living near Goma.

The Congolese families near Goma were so frustrated with their lives in the camp — living in leaky huts made from banana leaves, drinking contaminated water that caused diarrhea, and using slingshots to kill birds to cook over an open fire — that toward the end of our visit, they threatened to kill photographer Jon Warren and me. They desperately needed the world to see their hardship and wanted to make a statement. Our translator defused the situation and ran us to a World Vision vehicle, where he shared with us what had happened. I was relieved that we hadn’t been killed, but I also understood why the people living in those conditions would make such a suggestion. Refugee camps are bleak.

That’s why what I found in Cox’s Bazar, Bangladesh, was so surprising: five signs of hope I never expected. Cox’s Bazar is home to 1 million refugees — most of whom identify as Rohingya, a Muslim minority ethnic group — who fled Myanmar beginning in August 2017. It’s now the world’s largest refugee camp. I traveled there in January with Jon Warren to share the story of World Vision’s work in the camp with you.

I was unprepared for what happened next.

I learned this when I met a mother named Jaheda who brought her daughter, Minara, in for a final treatment at the World Vision nutrition center atop a hill that overlooks thousands of shelters made of bamboo and tarps. Jaheda was pregnant with Minara when they fled extreme violence in Myanmar.

As the family escaped, Jaheda stopped at a stranger’s house to give birth. “A woman helped me,” she says. “By the mercy of God, I had no problem.” But with little food to be had, Jaheda found it difficult to breastfeed her baby.

“Day by day, she was getting tinier,” says the 30-year-old mother. “When I arrived in Bangladesh, she was about to die. People were telling me, ‘Your daughter will not live.’” It was a dark time for Jaheda. “I thought, ‘Am I going to lose my [little girl]’”?

When I met her, I could see that Minara was a different child after 10 visits to a malnutrition prevention and treatment center run by World Vision in partnership with the World Food Programme. She was happy, healthy, and playful. The staff were rejoicing at her transformation.

How incredible to work in a program with a 0% death rate. It was 100% inspiring.

When my son, Nick, was little, his favorite book was Richard Scarry’s What Do People Do All Day? It was a picture book with illustrations that showed how construction workers, farmers, firefighters, and doctors kept Busytown running.

The camp — or series of about 30 camps — where the refugees live looks like Busytown. All day, men and women work, filling bags with sand and cement that they use to shore up hillsides and carving into the land with shovels to create drainage ditches, roads, bridges, and pathways. I have never seen such industriousness in a refugee camp.

World Vision pays them a fair wage to work on these projects and outfits them with orange vests. The money is small — enough to buy a chicken or some fresh fruit — but the work brings a sense of dignity back to lives that have been robbed of so much.

I’d never seen anything like the 42 community kitchens that World Vision operates in the camps, equipped with gas stoves that refugee women use to cook meals for their families.

Subash Chandranath, a Bangladeshi World Vision staff member, showed me around one of the community kitchens. He makes sure the gas tanks are full and running safely, and he answers the women’s questions.

Does he advise them on how to cook? “No,” he says, with a smile. “They are better cooks than me.”

The women have really bonded, says Shubash. “They talk to each other and share their experiences of Myanmar,” he says. “Sometimes I talk to them. They are very sad to share their stories. They had a life in Myanmar. Now they have nothing.”

Subash does more than equip the kitchen with what it needs to operate. “I comfort them,” he says. “I don’t think of them as refugees. They are our guests. We give them comfort and try to make them feel at home.”

I also spoke with Muchena, a 22-year-old, who was sprinkling spices, kept in an old water bottle, over sizzling chicken. The spices — coriander powder, chili peppers, turmeric, and onion — smelled so good.

“I love to cook here,” she says. “Even if I don’t have anything to cook, I come to have fun with other women. It has become a habit now. The kitchen also is like our home.”

Shubash was delighted to hear this. “It is like I am a teacher here,” he says. “They can share their feelings and experiences. After working here, I have become their friend in their happy moments and also in sorrow.”

I didn’t expect to hear laughter in the refugee camp. Those friendships were heartwarming.

I’ll be honest. When we first drove into the camp, I was overwhelmed seeing the number of humanitarian organizations working here. It was an assault on my eyes. More than 150 organizations work in the camps, and they are all well color-coded. Blue, red, and orange were everywhere.

“Why is World Vision here? Are we really necessary?” I wondered. It was the first time in almost 25 years of travel to countries where we work that the thought had crossed my mind. I resolved to find out if what we do and how we do it matters to the Rohingya people.

I asked Jaheda, when I met her in the nutrition center, about the World Vision staff. Were they different? “They treat us very well,” she says of the staff wearing orange relief vests. “They talk to us with honor.”

I asked Farjana Faraz Tumpa, 20, a teacher in a Child-Friendly Space where kids go to sing and learn. “At World Vision, everyone is like a brother or sister,” she says. “Other places I’ve worked are not like that. When we make mistakes, they don’t scold us. At World Vision, they talk friendly. They tell us nicely.” I liked that. It’s how I feel about the people I work with, too.

I asked the women in the community kitchens about the World Vision staff. “They are very kind to us and speak well to us,” one of them told me. “They gave us this community kitchen. They say, ‘This is all for you. We are here for you.’”

One of the mothers, Samira, told me that the refugees call World Vision staff, “The people in orange.”

By the end of the trip, I was thankful that orange was everywhere.

When I met Jaheda in the nutrition center, I asked her what she prayed for. She told me that she used to pray that her daughter would live, but her prayer has changed. “I pray that I will not die while Minara is young,” she says.

I was taken aback. I understood what she meant in a new light. I had just learned that I had breast cancer. I’d had a biopsy before the trip, and the results had come in. I had to make the decision to stay or to go home. The doctors felt that a few more days wouldn’t make a difference, so I stayed in Bangladesh to finish the story. It’s a story I’ve wanted to do for a long time. The refugees have been heavy on my heart.

The Rohingya camp was hot and dusty. The roads to and from the camp were bumpy, and drives were long. I had a constant headache — I think it was due to the tension I was feeling about discovering cancer. And yet, I’m so glad I stayed. Everyone I met in the camp ministered to me. There was always a hand to help me climb a hill and a cold bottle of water waiting for me at the top. In every shelter made of bamboo and tarp, people like Jaheda and Muchena made me feel welcome and as comfortable as possible, despite sitting on hard cement floors. I experienced such kindness from those in the camp and from our World Vision staff.

Cox’s Bazar, Bangladesh, now hosts the largest refugee camp in the world. About 55% of the refugees are children. You can show God’s love to vulnerable kids and families, like the refugees living in Bangladesh, right where they are. And thanks to public grants, your gift will multiply five times in impact! Donate to support refugees today.

Where have you found signs of hope you didn’t expect? Comment below!