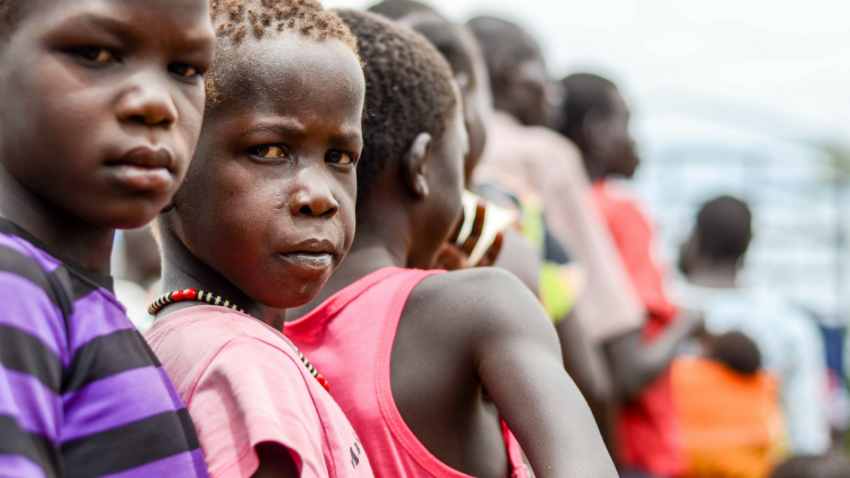 The children World Vision’s staff meet tell us this is not the life they want. This is the last resort. (©2017 World Vision/photo by Mark Nonkes)

As South Sudanese refugees arrive in Uganda bus after rattling bus, they reach a new, unwanted home — but it’s the best option they have.

See a snapshot of what life is like in these homes hacked from the Ugandan bush and how World Vision is helping them begin to recover.

Refugees arrive on a rattling bus, many of them children on their own and women with babies on their backs.

There are no smiles while passing the chain-link fence. Staggering into the refugee reception center with torn-up suitcases, a pair of chickens, or just the clothes on their backs, their minds are in the past — conflict, blood, slaughter.

The words hang in the air as expressionless facts.

South Sudanese refugees don’t dot their sentences with exclamation marks, a sad acceptance of a 4-year conflict the world has generally ignored.

The world’s youngest nation is in turmoil. Political infighting, land disputes, and inter-tribal conflict have led 1 in every 3 people in South Sudan to flee the violence. About 2 million people are displaced within the country, 1 million people fled to Uganda, and another 1 million people are dispersed in refugee camps in Kenya, Ethiopia, Sudan, the Democratic Republic of the Congo, and the Central African Republic.

Women and children have been affected the most.

Here in northern Uganda, 86% of the refugees are women and children.

As refugees step off the buses, they enter a medical tent. They’re pricked with needles — immunized against polio, tetanus, and measles.

Girls and women are asked if they have been sexually assaulted, a common occurrence among refugee women fleeing South Sudan. The unfortunate ones are referred to a special tent dedicated to treating the physical and emotional wounds.

Babies are measured and weighed to make sure they’re not malnourished. In South Sudan, food has been unable to reach many villages as men with guns have blocked roads and prevented food deliveries to communities, causing a hunger crisis.

For children who arrive in Uganda without an adult, caseworkers step in. The children are interviewed and then placed with foster families who offer care and protection.

Over the next few days, the refugees go through a series of other identity checks and registration tents. They eat corn meal and beans and sleep in bunkhouses with plastic walls and no bunk beds inside. Refugees sleep on the ground.

After they’ve been cleared, the paperwork all signed, they are loaded onto cattle trucks and driven almost 19 miles to a city-in-the-making being hacked from the Ugandan bush.

There, each family will be given a slice of Uganda’s untamed landscape, machetes and knives to clear the grass, and plastic sheets and poles to build a makeshift shelter. Later, sacks of corn meal and dried beans will be distributed — the same meal that they will eat for the foreseeable future.

This is now their home.

The children that World Vision’s staff meet tell us this is not the life they want. This is the last resort. But staying in their homeland where bullets fly, where the captured shriek, and where homes are burned by armed groups is not an option.

They want to be reunited, to be in school, and to live in a country at peace.

Yet, there seems to be no end to the violence in sight.

So bus after rattling bus they arrive.

Surely something more can be done. Surely, South Sudan’s children deserve something better than this. Surely.

Join World Vision in supporting the needs of South Sudanese refugees as they arrive in Uganda. Donate to our South Sudan relief fund today.

Read more from the World Vision blog here, and leave a comment below!