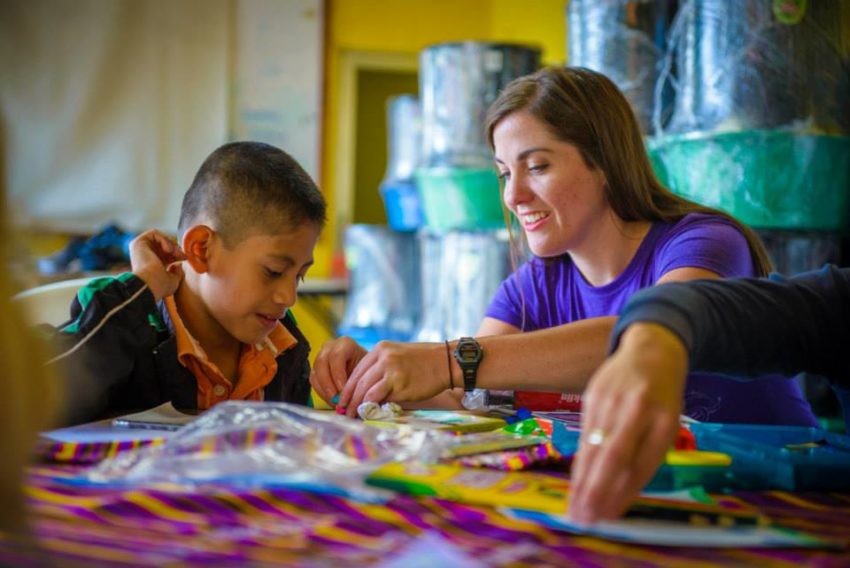 Our second day in Guatemala, the World Vision bloggers had the amazing opportunity to meet the children they sponsor! We’re here witnessing the ways that World Vision’s work helps transform the lives of children, families, and communities through child sponsorship.

My stomach was in knots. I only knew a few things about him. His name. His age. His favorite subject. His favorite sport. And I wasn’t even sure I knew how to pronounce his name. It was his favorite subject that caught my attention the day I scrolled through picture after picture of children waiting for sponsors. Gerson, an 8-year-old boy, liked to read.

Anticipating the meeting all morning, I recognized him as soon as he walked up the driveway at the World Vision offices at Tinamit Junam. His ears stand out a little from his closely cut hair, the way my father’s did at that age. He came with his mother, Marta, and his younger brother, Jefferson. After a quick exchange of names, he hugged me. Without a translator to help, we had to rely on my pathetic language skills. We got by okay. I learned from Marta that she also has three daughters. Gerson’s older sisters were in school.

The fact that his sisters are in school is a testament to World Vision’s work in the community. When World Vision entered this area, 90% of children were malnourished and girls rarely attended school. Since that time, undernourishment has dropped to only 3%, and girls now attend school at an equal or higher rate than boys. World Vision serves approximately 80,000 children in Guatemala. Only 50–60% of those children have sponsors. To the children in Guatemala, their sponsor takes on the role of a godparent.

Becoming a godparent is a serious undertaking. While it varies in tradition and religious background, godparents typically make a commitment to being a part of a child’s life and building a relationship with the godchild. In essence, that is what sponsors do as well. It’s as simple, but as important, as building a relationship with a child. This is accomplished through not only monthly financial support, but through letters. With each letter sent to the children, a sponsor or a godparent is making a lasting difference in a child’s life by creating a personal connection.

The correspondence room at the national headquarters in Guatemala is what I imagine the North Pole Post Office looks like in December. It is a maze of boxes and bins stacked high with letters. The tiny room processes more than 3,000 letters per month. Those letters are sorted by region and then translated before they are delivered. This is where my letters to Gerson will come. From Oregon all the way to Guatemala, and then they will wind their way through the mountains to him in Tinamit.

Marta tells me Gerson spent all yesterday afternoon knocked out by a cold. His mother tells me he is constantly on the go and never sleeps that much. But even a lingering cough doesn’t stop him from kicking a soccer ball around with me. Where my Spanish skills failed, soccer became our universal language. He passed the ball to me, and I kicked it back to him. Other children joined in, and we played until I was sweaty and Gerson was tired.

As I sat to talk to his mother, he grabbed a few pencils and began to draw a picture. After singing songs and playing with the other children, we ate lunch and drank horchata, a delicious rice milk with cinnamon. And then it was time to say goodbye. More hugs and thank yous. He waved back at me as he followed Marta and his brother back down the driveway.

On the van leaving Tinamit for the day, I held the picture Gerson drew. He had started with a circle drawn by tracing the outer edges of a coin. The circle became a sun. He added grass. A flag. A house. And a person. Above it all he drew a rainbow. The flag he colored became the flag of Guatemala. As he colored the person’s T-shirt, he looked at mine. The girl he drew was me. In the center of the flag where the seal would be, he wrote “Te queiro.” I love you.

Nearing the market, I heard someone in the front of the van say, “Look! Some of the sponsor kids.” I looked out the window and saw Jefferson. He, Marta, and Gerson were about to enter a store. I slid the window open as fast as I could. Leaning out as far as possible, I shouted, “Gerson! Marta!” as we passed by. Marta heard me and motioned for the boys to look. Smiles spread wide across their faces. The three of them waved back at me until the van was out of sight.

Deciding to become a sponsor felt like such a small thing sitting at my computer. A commitment of barely more than a dollar a day. Today, I learned otherwise. Becoming a godmother to Gerson is no small thing at all. From the smile on his face, to the picture he drew, to his final words of goodbye, “Te quiero mucho.” I know that building a relationship with Gerson is one of the most important decisions I could make.

If a soccer ball, a bear hug, and a pencil were all that was needed to break language barriers and communicate love, then I can only imagine what the years ahead are going to look like with letters traveling the miles between Oregon and Guatemala, from one reader to the other.

Will you consider joining me in partnering with World Vision and becoming a sponsor, a godparent, to a child in Tinamit Junam today?

As we visit World Vision’s “Tinamit” community in Guatemala, we’re bringing you the opportunity to help these children directly. Hundreds of children in Tinamit alone and thousands across Guatemala still need sponsors! Consider sponsoring a child in Tinamit today.

Follow the Guatemala bloggers this week as we witness and tell the stories of the children, families, and communities whose circumstances have been changed for the better by World Vision’s sponsorship programs.