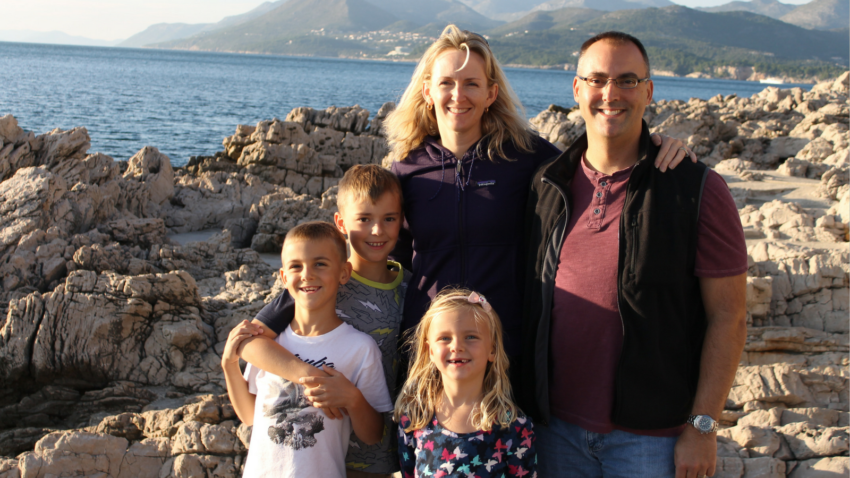 Chandra and Dan Brissette with their three children. (Photo courtesy of Chandra Brissette)

Meet Chandra and Dan Brissette. They lived in Damascus, Syria, while working with the Foreign Service from 2002 to 2004.

In today’s Q&A, they talk about how much they loved pre-war Syria, why they were inspired last fall to help refugees of the Syrian crisis — by starting a fundraiser for socks — and their hopes for Syria’s tomorrow.

What was it like living in pre-war Damascus, Syria?

We loved Syria. We had the opportunity to travel all over the country. We visited ancient Roman sites and were typically the only visitors there. Imagine having a historic site all to yourself, roaming freely through it. The people we encountered were welcoming, often inviting us in for tea. The children, always curious, followed us around everywhere we went. Westerners were a rare sight. When Syrians learned we were American, they were usually overjoyed. We were extended dinner invitations and always introduced to family members who were close by.

Damascus was an amazing mix of people — there were Christians, Muslims, and Jews living in the Old City. We would often spend hours visiting with Syrians we met in the souks (marketplaces), primarily shopkeepers with whom we had become friends. Syrians loved to practice their English, so we were often approached for conversation. Inevitably, they would comment on America, and it was always positive.

Based on your experiences, why are you passionate about the refugee crisis?

I’m passionate about the cause because the devastation that is taking place in Syria and Iraq is overwhelming. This crisis is changing the Middle East and Europe forever, and it’s changing the world. It’s hard for most people in the U.S. to truly understand the gravity of the situation. Imagine being so desperate that you leave everything behind and leave your country with only a backpack. Imagine being so desperate, you have to weigh the risk to your children between staying in your country or becoming a refugee.

We are now in Sarajevo, Bosnia and Herzegovina (BiH). When the refugees started flooding into Europe, we thought they might make their way through BiH. The country anticipated an influx, but very few, if any, came through Sarajevo. Thousands instead made their way around BiH, via Serbia and into Croatia. One of our good friends is the director of World Vision here in Sarajevo, and we would often get together and hear about the state of the refugee camps along the border. It was heartbreaking. The more we heard, the more we wanted to do something to help. One night, she mentioned that after a trip to the camp in November 2015 that she saw so many people without socks. They were just wearing sandals. By the end of that evening, we came up with the idea to do a sock drive.

Can you tell us more about the sock drive?

We approached and launched sock collections at the French School, the International School, and the U.S. Embassy here in Sarajevo. My son presented the idea to his class, and my daughter’s class made and decorated the box for the socks. We collected socks over a two-week period. Since we had several friends in the U.S. who wanted to contribute but couldn’t get socks to us, I set up the website on the World Vision page for financial contributions. I promoted our fundraising page primarily through Facebook. I also had a few advocates in the U.S. who passed on the link to those not on Facebook.

We collected 567 pairs of socks and $1,100 on the website in addition to another $1,100 cash. I felt as though people really wanted to do something but didn’t know what to do. This gave them an opportunity to contribute in some way. We delivered the socks to a transit refugee camp in Croatia at the Slavonski Brod border crossing at the end of December. There, the socks were combined with shoes and scarfs and then handed out to refugees arriving by train.

What impact did the sock drive have on your family?

Our kids were very excited about the sock drive. The kids loved to watch the red line move up as we got more and more contributions. They were eager to check the website multiple times a day to see if the line had moved! We had many family dinners discussing the tragedy of war and the impact it has on those countries and citizens.

How would you encourage others to get involved with the crisis?

We cannot be apathetic and think it is someone else’s problem. We need to be better educated about what is taking place in the region. We need to have an understanding of the complexity and an understanding of our role as global citizens so we can have a positive impact on a people-to-people level. We’re all capable of contributing positively in some way — whether by giving money to those in the field who are making a difference, supporting a refugee family in your area, or by learning more about the history of the region and sharing it with others.

If you could go back to Syria after the war, what would you hope would still be there?

I wonder what has happened to our friends there. I think of all the shopkeepers and restaurant and hotel owners in the Old City who desperately depended on tourists for their income so they could support their families. Are they still there, or have they escaped in the exodus? I heard that one of our favorite shop owners has been determined to stay, but I can’t imagine how he is earning a living. I wonder what has happened to my former neighbor. I used to go to her house for a language exchange once a week. She was trying so hard to learn English.

I know that so many of the archaeological sites have been destroyed, and it is utterly sad to know that future generations won’t be able to walk through these ancient villages and touch Roman pillars that still stood strong.

Despite all that has been destroyed, if I could go back to Syria I would hope to find a spirit of resilience there. I hope, when this war one day comes to an end, that people are determined and encouraged to rebuild what has been lost; that families are reunited and the scars from the war begin to heal; and that children can laugh and play in the streets and not live in fear. I hope to find a Syria that is united and wanting peace. And I hope to see a world that will help them on this path, altruistically.

Are you feeling inspired by Chandra and Dan’s story? You can start your own fundraising page, too! Stand together for the children of this refugee crisis.