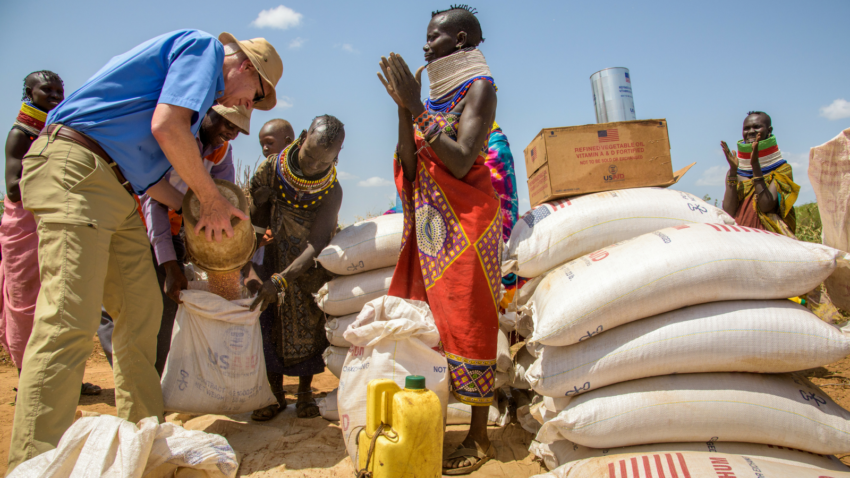 Rich Stearns visits a World Vision food distribution in Turkana, Kenya, where severe drought has led to hunger and loss of most of the livestock. (©2017 World Vision/photo by Jon Warren)

While parts of Kenya face a food crisis, other drought-affected regions still thrive.

I don’t know about you, but I can think of at least a dozen more interesting ways to spend my time than going to the doctor. I don’t enjoy check-ups, even though it’s the best way to stay healthy. Over the course of regular visits, my doctor notes irregularities and prescribes timely treatments so they don’t develop into something worse.

Sometimes I hear about the opposite scenario: a friend who avoids doctors like the plague suddenly feels sick enough to go to a physician, and he finds out he has late-stage cancer. The prognosis could have been different had the cancer been detected and treated earlier.

This is also true of the health of entire communities. The equivalent to terminal cancer in a community is famine. We’ve all seen those haunting images of skeletal children. By the time a famine hits the news, it’s too late. But it could have been prevented. The early warning signs were there, and the effects could have been mitigated. Without timely action, it spirals into disaster.

The better alternative is community development, which achieves what dutiful visits to the doctor do: collaborative and sustainable care tailored to people’s needs, aiming for best results while averting worst-case scenarios. That’s World Vision’s approach with child sponsorship.

I saw both ends of the spectrum during a visit to Kenya a few months back. Kenya is one of the East African countries affected by a hunger crisis, brought on by drought and other factors, which may well lead to full-blown famine. In Turkana, northern Kenya, the drought’s effects were tragically evident. The livestock had died, leaving skeletons in the dirt like a bizarre museum exhibit.

The people were desperate. The loss of animals — their livelihood — left them with few options for food. Mothers and their children tried to suck the marrow from dead donkey’s bones. Women wailed “we are dying” as they held up animal carcasses.

How did it get so bad? The Turkana people perpetually live on the knife-edge of survival. They’re pastoralists who move from place to place with their herds looking for pastureland — a lifestyle that makes long-term community development difficult. And so when the rains fail and the pastures wither, the bottom falls out of their lives.

I found a very different scene in Kalawa, a community in another part of Kenya. The landscape is greener, and the schools and churches are full. But the most marked difference is in the people. In contrast to the gaunt mothers and listless children I saw in Turkana, Kalawa’s women keep busy with household chores and the children laugh as they play hide-and-seek and kick around a ball made from plastic bags and twine.

World Vision has been working in Kalawa since 2011, supported by child sponsors in the U.S. Drought has hit here too, and ordinarily this would deal a harsh blow to families reliant on farming. But child sponsorship fuels holistic development programs that gradually help families become resilient to fluctuating climate conditions.

For example, World Vision teaches farmers how to capture rainwater in holding ponds during the wet season to use to irrigate their crops. That alone keeps food on the table. Sponsorship has also funded a water system that provides clean water for people to drink and use for cooking. Trained community health workers spread better practices in nutrition and sanitation and help make sure that children under 5 get the necessary immunizations.

The results are clear when you look at a map of children’s nutrition status across Kenya. The Turkana region is marked blood red, “extremely critical.” Makueni district, where Kalawa is, is in the green, “acceptable” range. Back to the doctor’s analogy, this is like looking at two X-rays of heart arteries side-by-side: one of a person who follows physician’s orders and one who continually struggles with poor health and never receives care.

The nutrition map bears out what I saw in the children in Kenya. In Kalawa, I met my newest sponsored child, 9-year-old Nicholus, a healthy and vivacious boy who enjoys school and Bible study. I taught him how to throw a Frisbee, which he quickly mastered (and wore me out!). But a few days later in Turkana, I stood with 9-year-old Ejiem beside the carcass of his beloved sheep, the last of many animals to die. He was not just heartbroken — he also didn’t know where his next meal was coming from. “We have been praying to God,” Ejiem says. “Our hearts are crying.”

Despite the difficulties of working with the transient Turkana people, World Vision is committed to doing more to give children like Ejiem a better chance. We’re starting a water project that will employ solar pumps to operate boreholes, and we’ll introduce climate-smart agricultural methods to encourage families to pursue a lifestyle in farming. In time, it might be possible to do longer-term, child-focused projects.

Community development is no quick fix. It takes a lot of time, funding, and prayer. But just as prevention is better than cure, this is the best way World Vision knows to lift communities out of poverty and help them avoid crisis. We’re aiming for nothing less than a clean bill of health — resilience — and a transformed quality of life, dependent not on weather, fortune, or even World Vision but on God.

Consistent, long-term care prevents a crisis. Join us in developing communities that are resilient to disasters like famine. Sponsor a child in Kenya today!

Help us address the immediate needs of the children of Kenya and other hungry places in East Africa. Thanks to grants, your gift will multiple 7X in impact to provide emergency food, clean water, and more to children and families fighting for their lives.