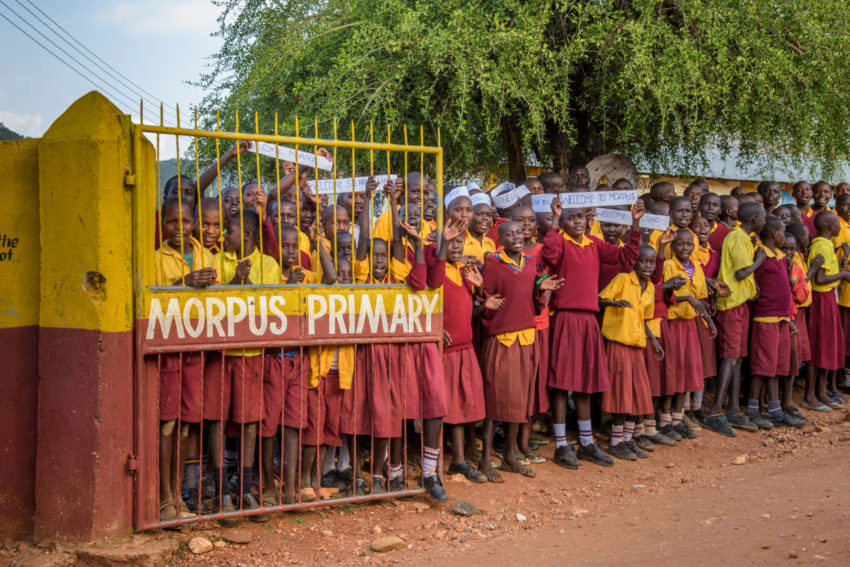 After her wedding, Mary* regularly went to the water well with the other women in the village. As a wife, one of her jobs was to collect water for the family. One day, when the other women started to leave, Mary lagged behind, pretending to tether her donkeys together. Instead, she turned and ran as hard as she could in the other direction toward freedom.

Mary’s marriage, like so many girls in Kenya’s West Pokot County, hadn’t been a marriage of love. Because of her family’s extreme poverty, her father promised her to an elderly man for a herd of cattle when she was only 13 years old.

Mary had begun school at age 6. She loved learning and worked hard for the bright future she believed education would bring. She couldn’t know the heartaches and trials that lay awaiting her.

She saw her mother’s struggles to feed her family of eight children. Mary’s father’s battled alcoholism and that only drove the family further into poverty. As his addiction worsened, Mary and her younger brother John* dropped out of school to help their mother by going to work in neighboring Uganda’s gold mines. They worked for days to make money for their family. She was 10 years old.

“I remember that time,” Mary says. “Life was so hard, and we were suffering so much. I asked God what we had done for him to allow that.”

The villagers began to ask her father asking why the family lived in poverty when he had a daughter who would bring in a dowry if he offered her in marriage.

Dreams of a good life, gone

In West Pokot, the culture dictates that a girl go through female genital mutilation (FGM), also known as cutting, to prepare for marriage. Mary’s father ordered her to undergo FGM to prepare for her upcoming marriage.

But Mary, a strong girl, refused. She also refused to marry the man who approached her father with his offer of cattle for her hand.

Her father seemed to respect her decision, so she thought that everything would return to normal. Instead, a few days later as she collected water from a nearby stream, men abducted her and forcibly took her to the elderly man’s house.

“My parents accepted the dowry, so I was made a wife by force,” she says. “Since I had refused to be circumcised, the man who was now my husband agreed to marry me first, then make me go through FGM once I was in his home.”

That night, her new husband consummated the marriage by force. Mary says that day was the lowest point in her life.

“I couldn’t believe that my dreams of having a good life were over,” she says. “I was now going to go through the same life of suffering, poverty, and abuse that my mum had. This was just too much.”

That unbearable future stretched out before her, but Mary still had that spirit of determination that first drove her to refuse her father’s wishes. And so, she hatched her escape plan.

She says, “I didn’t even know where I was going. My aim was to go far away from the place as fast as possible so no one could find me easily.”

Her first night alone, she slept under a tree in the forest. Then, over the next three days, she met strangers who took pity on her and provided her with food and a place to sleep. It was at one of the Good Samaritan’s houses that Mary first heard about a sanctuary in a school for children fleeing FGM and child marriage.

That was Morpus Primary School. “It was like a dream come true for me,” says Mary. “When I escaped from my husband, my wish was to go to a place where people like me could be welcomed and supported. But that place was only in my head. I didn’t know it existed.”

Rates of FGM in West Pokot is among the highest in Kenya. Nearly 7 of every 10 girls in the region have undergone the horrifying and disfiguring practice.

Moses Chepkonga, the manager for World Vision’s child protection and education project, explains that through enhanced awareness by the organization, attitudes toward FGM and child marriage in the region are slowly changing, making people shun the practice.

Mary and other children learned about alternative rights of passage through World Vision. Now, she understands the adverse impacts of FGM, such as infections, severe bleeding, increased risk to HIV, and birth difficulties. She’s resolved to become an anti-FGM advocate.

“I have also learnt a lot about the rights of children, and I want to help them when I finish school so they can live happily.”
World Vision involves the whole community in its child protection work — providing training for children, village elders, religious leaders, and government officials to fight FGM. To achieve cultural rejection of both childhood stealers, mindsets at every level in society need to be changed.

Now 16, Mary ranks as one of the top students in her class. She’s so thankful to be able to study without the fear of her education being snatched away. She’s determined to continue her hard work so she can achieve success in the future.

She no longer asks God why he allowed the pain and struggles in her life. She looks back and sees God’s hand of protection in every step of her journey.

“When I escaped, I didn’t know where I was going. But for some reason, nothing happened to me on the way, even when I slept in the forest,” Mary says. “Also, I kept meeting people who were ready to give me food and assistance. That must have been God watching over me all the time.”

She wants to share her newfound hope with others someday too. She says, “My dream is to one day come back and help other children in my community who are going through problems like I did.”