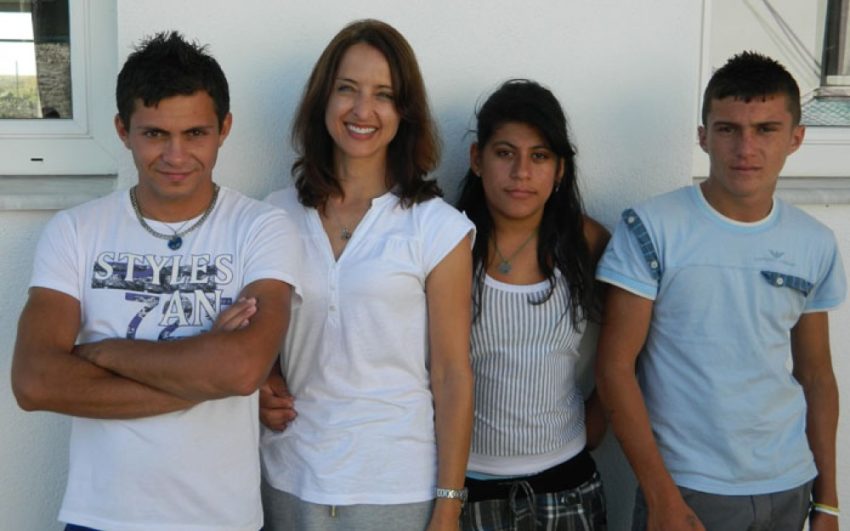 They say a picture is worth a thousand words, and that certainly has proved true for a group of teenagers in Tirana, Albania. Pictures, or specifically photos, have given these youths the means to tell their peers about the dangers of child trafficking.

I met three of those teens — Adelajda, Mariglen, and Rodolf — in summer 2011 during my six-week stay in Albania, one of Europe’s poorest nations. They told me stories about life in Bregu i Lumit, one of the capital city’s most depressed neighborhoods.

Here, children often provide for their families by begging or collecting scrap metal to sell. Young teenage girls sometimes accept marriage proposals from seemingly rich acquaintances, only to discover they’ve been sold into a life of slavery.

Adelajda, Mariglen, and Rodolf have themselves faced the trials of urban poverty. Adelajda, a soft-spoken 15-year-old, hasn’t attended school for two years because her father is too ill to work and the family can no longer afford school supplies. Sixteen-year-old Mariglen recalls having to work at a local car wash as a child to help the family make ends meet. And Rodolf, a confident 18-year-old, laments dropping out of school in seventh grade to become a musician — a life that led to alcohol abuse and promised little hope for a stable future.

Despite their hardships, all three say their lives changed for the better through a World Vision peer mentoring opportunity.

They joined nine other young people in learning life skills and discussing issues affecting their community, such as poverty, child trafficking, and child labor. World Vision took this lesson a step further by loaning each youth a camera and asking them to take photos in their community to illustrate these issues.

The results were dramatic. One photograph Mariglen captured shows tiny ripples of water disturbing an otherwise still pond. “We all know stories of children disappearing from our area,” he writes in his caption.

Rodolf photographed a tiny sliver of light shining into a dark place. His caption reads: “For trafficked people, the sight of their future is limited. But there is hope, since we know that in a dark room, even a small window can shed light to cast away this darkness.”

These photos ultimately became a traveling exhibit that made its way to various locations in Tirana and to other Albanian cities. (See photos at https://photovoice.org/eyes-of-youth/.) Project participants accompanied the exhibit at each showing, helping to facilitate discussions with community members or teenage peers about the dangers of child trafficking. The success of this project inspired World Vision to introduce two similar projects in other parts of Albania.

“People came up after the exhibition and said they were affected by what they saw and heard,” said Rodolf. “It’s a good thing that we’re able to speak about this subject in this particular way. To say human trafficking is wrong — everyone knows that. But to bring it down to the level of showing them ‘this is human trafficking’ in a photograph, it gives it a wider perspective.”

Speaking to these teens and seeing their photographs allowed me to see more clearly how art can open doors to educate communities, to deepen understanding, and to motivate change. In the case of Adelajda, Mariglen, and Rodolf, the experience of taking and sharing photos empowered them to speak up and take steps to make a difference.

Prior to their participation in the photography project, they worked with fellow peer educators to build new trash bins for their garbage-strewn neighborhood. They also painted nature-themed murals designed to inspire their urban neighbors to respect the environment.

As for me, I now see my World Vision support through a new lens. I see it as a vehicle to make positive change for my sponsored child, yes. But child sponsorship also serves as a catalyst for broader change in cities like Tirana and countries like Albania. The lives of three youth, reflected in their photographs, showed me just how this can be done.

Esther Chapman is a freelance journalist, pastor’s wife, and mother of four living in Sacramento, Calif. She and her family sponsor a child through World Vision.

Sponsoring a child in Albania is a personal way to show God’s love to a child in need.