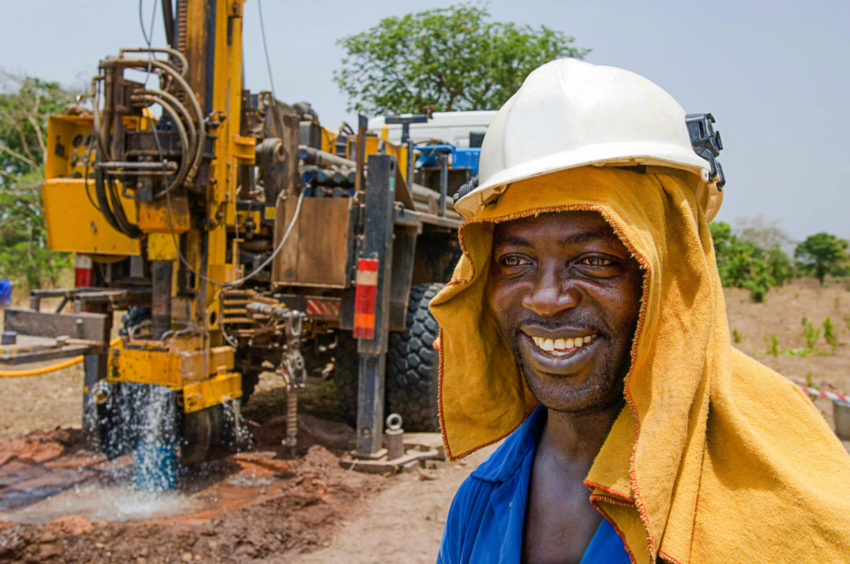 One of the well-drilling crew members in Tampiong village in Ghana. (©2006 World Vision/photo by Jon Warren)

No one could blame the leaders of northern Ghana’s arid Savelugu community for wondering if they would ever receive the precious gift of clean water.

Multiple searches for underground water sources had failed, and hydrologists eventually concluded what no one wanted to hear: There was no water to be tapped beneath the community’s parched landscape.

Despite the dire conclusion, in early 1999, clean water erupted from the ground. The “no water” myth gave way to what the local people called God’s miracle. They celebrated as World Vision drilled two wells that brought water spurting from the earth at an abundant 79 gallons per minute.

Alhaji Abduai Haruna, the district executive, said with amazement, “What is your secret, World Vision?”

The “secret” is a triad of clean water solutions that begins with faith in God, the Giver of water. “The ‘secret sauce’ is that our staff love the poor,” says Greg Allgood, World Vision U.S. vice president of water development. “The reason we do this is that we follow the teachings of Jesus, who loves the poor and teaches us to give water to the thirsty.”

In addition, long-term partnerships between World Vision and thousands of corporations, foundations, and individual donors are in place to provide God’s gift of clean water to rural communities. Finally, World Vision’s presence in a community for on average 15 to 20 years allows time not only for successful well drilling but also time for community members to learn water system management, including maintenance and repairs.

When these three practices came together in Savelugu, life was transformed. Gone are the days when mothers like Haijia Adamu Disco, who lost four sons to water-related diseases, live in fear that more of her children would die. Today, Haijia calls World Vision duma zaa deba — the people who help the world.

Like Haijia, millions of parents in Ghana and beyond no longer dread that their children will die from drinking dirty water. Before, waterborne pathogens or parasites like guinea worm were ingested as larvae and grew in the human host until they were several feet long. The worm exited the body by breaking through the arms or legs in a slow and excruciating process. Infected adults couldn’t work, and sick children dropped out of school.

“The clean water contributed to increased productivity of farmers, who were mostly affected with guinea worm during the farming season,” he says. “It also improved the well-being of children, who were enabled to attend school. Water also allowed World Vision to authentically demonstrate God’s love for them.”

Guinea worm is now eradicated in Ghana. As more wells were drilled, the long-term partnership among World Vision, the Conrad N. Hilton Foundation, and private donors continued to reduce more water-related diseases — trachoma, typhoid, cholera, and more. In Ghana alone, deaths among children younger than 5 dropped from 120 deaths per 1,000 in 1990 to 69 deaths per 1,000 in 2009.

We believe that every child deserves clean water, and we’ll not rest until this is achieved.—Dr. Greg Allgood

“It’s stressful, time-consuming, and dangerous,” he says. “We had to go down into a very deep well that needed three to four of us at the same time. One would scoop the water into a bucket and lift it to the next person. Some of my friends fell into the well and died.”

Thirty years after he began working for World Vision in Ghana, Emmanuel’s passion for clean water continues as he ensures communities throughout Southern Africa receive the life-saving gift of fresh water.

The Conrad N. Hilton Foundation joined World Vision in 1990 to expand drilling into Mali and Niger, replicating the success achieved in Ghana. Since 2006, inspired to move beyond the arid countries of West Africa, World Vision and its partners are providing clean water in rural Ethiopia, Honduras, India, Mozambique, Rwanda, and Zambia.

Millions globally not only have clean water, but also the basic sanitation and hygiene education that further reduces the spread of disease: effective handwashing, safe food storage and garbage disposal, toilet construction, and more. When clean water is combined with knowledge, deadly water-related diseases nearly disappear.

Despite significant gains, World Vision and its water partners are far from done.

“We believe that every child deserves clean water, and we’ll not rest until this is achieved,” Greg says. “We believe we can solve the global water crisis within our lifetimes. This is not just a hope, but something we are working to make happen.”

In Ghana’s Savelugu community — and in thousands of communities around the globe — that commitment overflows into the lives of millions, spilling over into God’s miracle of new health, opportunity, and hope.