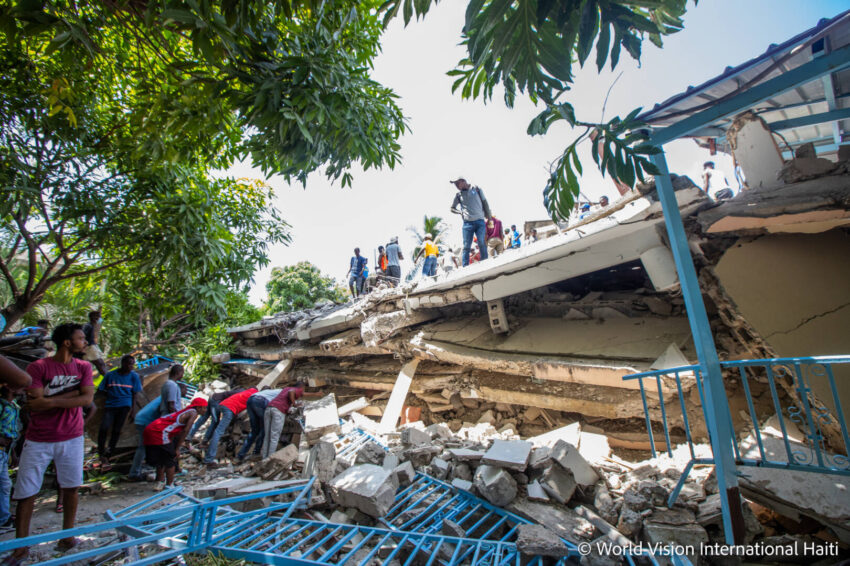 A magnitude 7.2 earthquake struck Haiti on August 14, 2021. It was stronger than the magnitude 7.0 earthquake that devastated the poverty-stricken Caribbean country in 2010 that affected 3 million people and left 1.5 million homeless. (©2021 World Vision) 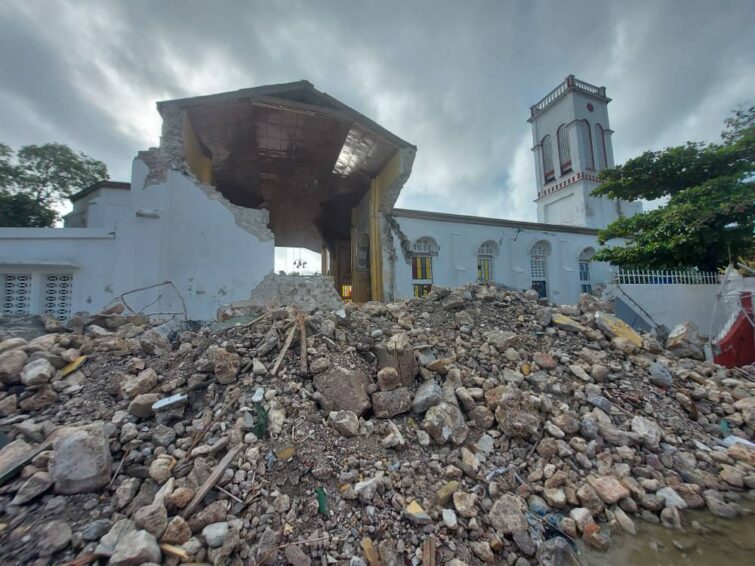 The ruins of the Sacred Heart Church of Les Cayes in Haiti. The church was among 60 houses of worship destroyed or damaged following the magnitude 7.2 earthquake. (©2021 World Vision/photo by Guy Vital-Herne) 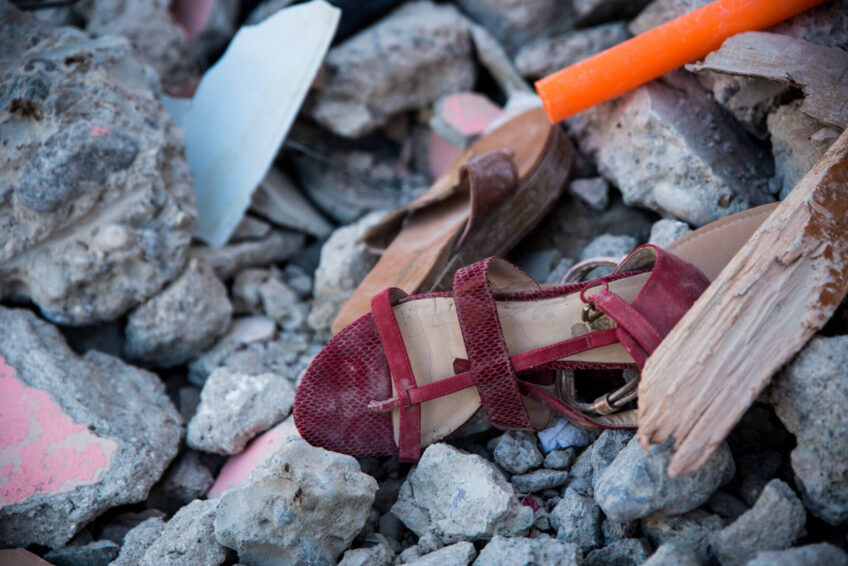 A red sandal rests amid the rubble of a destroyed home in the village of Marceline, north of Les Cayes, in Haiti. (©2021 World Vision/photo by Guy Vital-Herne) 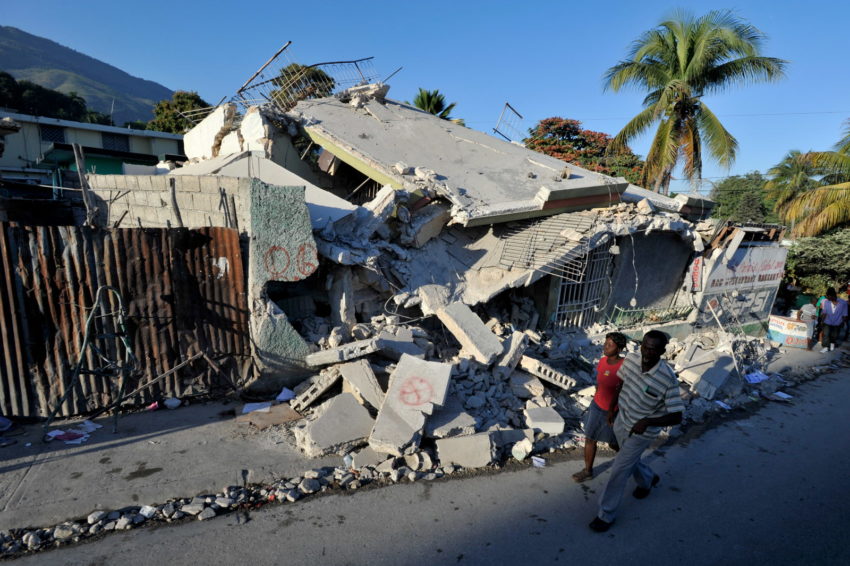 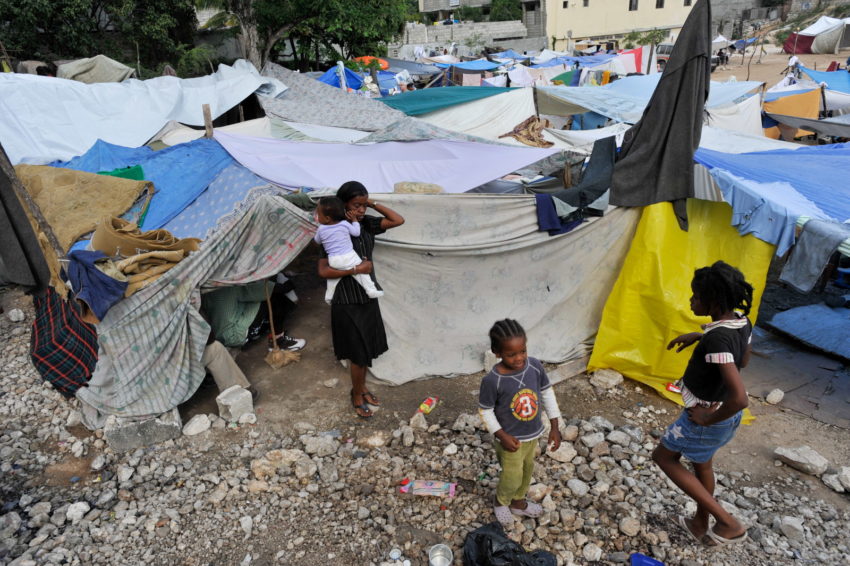 In Port-au-Prince, Haiti’s capital, families constructed makeshift shelters from blankets, tarps and any scraps of construction materials they could find after the Haiti earthquake. (©2010 World Vision/photo by Jon Warren) 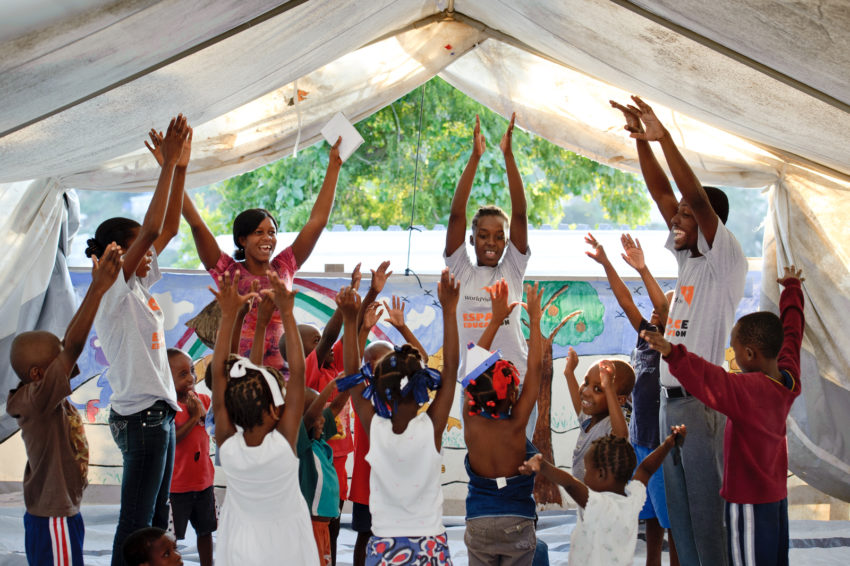 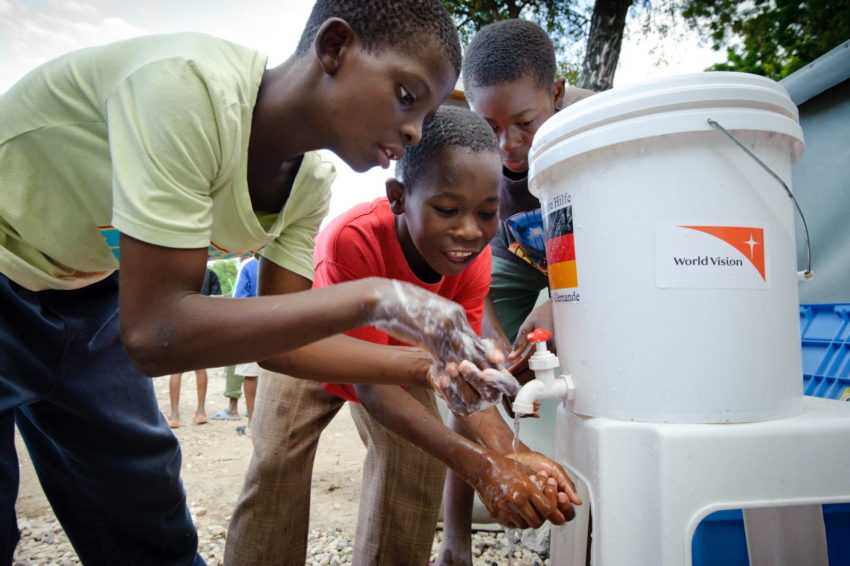 Children at a Child-Friendly Space in Port-au-Prince learn about the importance of washing their hands to prevent cholera in 2010. (©2010 World Vision/photo by Jon Warren) 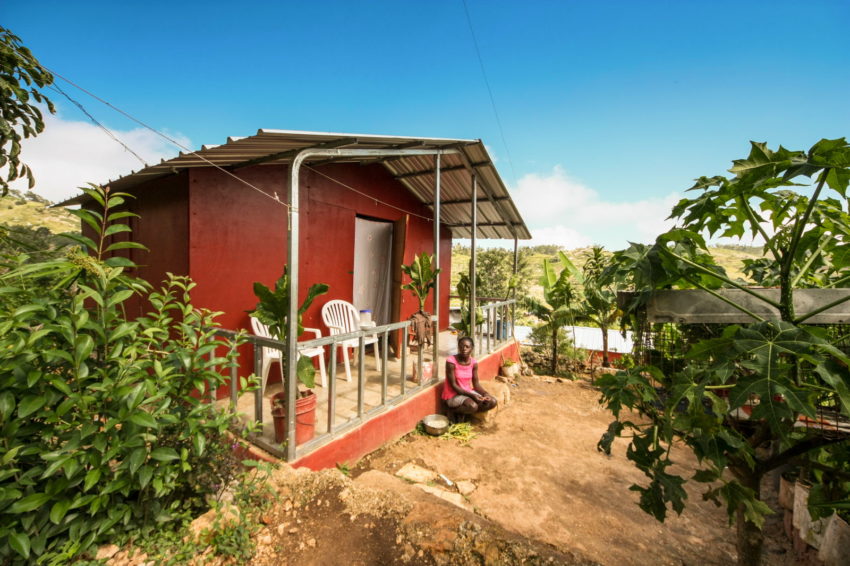 “This is way better than before,” says Guirlande Juste of the transitional home she moved into with her son and other family members in 2012 after the earthquake destroyed their house. For months they had lived in a shelter they cobbled together from scrap boards and metal sheets. (©2012 World Vision/ photo by Guy F. Vital-Herne) 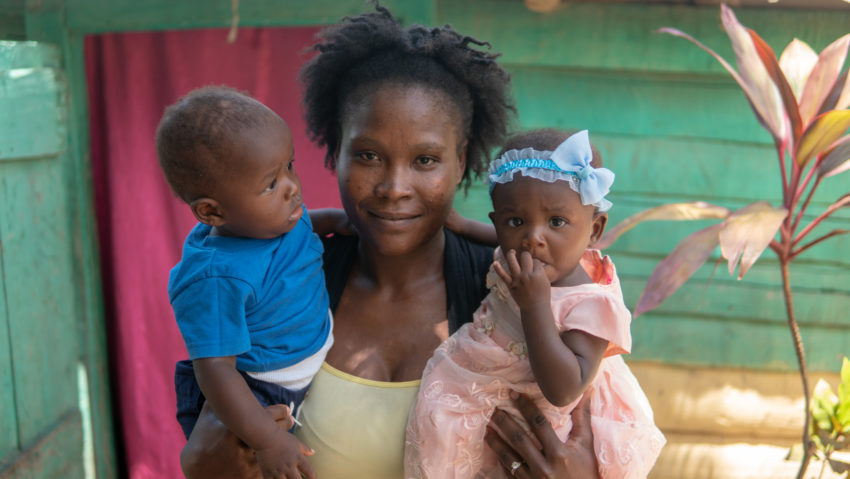 A magnitude 7.2 earthquake struck Haiti on Saturday, August 14, 2021, causing widespread destruction in the Caribbean country, according to the U.S. Geological Survey. The death toll has risen to at least 2,200 as search and rescue teams raced to find survivors in collapsed buildings and rubble. At least 12,200 are injured and hundreds are still missing.

While World Vision has worked to improve the lives of children in Haiti for 30 years, our programs aren’t near the southern quake-hit zones. However, we’re distributing life-saving food supplies and hygiene kits to 6,000 people and stand ready to help another 240,000 in the affected regions. We’re coordinating with partner organizations to help families along with children in orphanages that lack access to water, food, and electricity. We’ve also received word that community members in our program areas and our staff are currently safe.

Survivors recalled their terror as the earth trembled and unleashed destruction in the Les Cayes area.

Jasmine, a mother of two, says her 4-year-old daughter, Nelly, was with her in their home in the village of Marceline, north of Les Cayes. The quake unearthed a boulder that rammed their house. “When the tremor started, I held on to Nelly and started crying: ‘Jesus! Jesus! Are you going to let me die with my baby? Jesus, save me! Jesus, save me!’ I am still very traumatized! My head hurts and turns every now and then,” Jasmine says.

“My mother held unto me and didn’t let go,” says Nelly.

Jasmine’s husband, Geffrard, rushed home to find his family alive and their house destroyed. “My son came to hug me as I was coming back to the house. The next thing I remember was holding on to him and being covered by dirt from the land sliding down on our house,” Geffrard says. “My wife kept calling me to help her. But I was submerged by all the dirt and couldn’t move. Now the children can’t stand any sudden sound. They are on edge. Even when you hug them at night, they think that it’s because something is happening.”

The earthquake is believed to have occurred along the same fault line as the devasting tremor 11 years ago. The magnitude 7.0 temblor that struck Haiti on the afternoon of January 12, 2010, was one more disaster in a country that has suffered from decades of political, economic, and social setbacks and inequalities.

“We are deeply concerned about the devastation that this earthquake causes in a country already hit by extreme poverty [and] social and political unrest,” said Marcelo Viscarra, World Vision’s national director in Haiti. “But now, along with the effects of an earthquake whose damage has not been officially assessed, we have a pandemic and the threat of Tropical Storm Grace.”

With approximately 3 million people affected, the 2010 earthquake was the most devastating natural disaster ever experienced in Haiti, the poorest country in the Western Hemisphere. Roughly 250,000 lives were lost and 300,000 people were injured. About 1.5 million individuals were forced to live in makeshift internally displaced person camps. As a result, the country faced the greatest humanitarian need in its history.

When disaster strikes, World Vision is there. Help us respond to disasters like earthquakes.

FAQs: What you need to know about the Haiti earthquakes

Explore facts and frequently asked questions about the 2021 and 2010 earthquakes, and learn how you can help people in Haiti.

World Vision is distributing pre-positioned emergency food and hygiene kits to help 6,000 people. We’re also working with partner organizations to address the needs of the most affected families in the hard-hit area of Les Cayes, south of the capital Port-au-Prince. We’re gearing up to help 240,000 people, 60,000 of whom are children, through:

How many people died in the 2010 Haiti earthquake?

Why was the 2010 Haiti earthquake so destructive?

The earthquake registered a magnitude 7.0; that’s a high level of energy at the point of impact. Because it occurred at 6.2 miles below the surface, a shallow depth, its powerful energy had a devastating effect at ground level.

The epicenter of the 2010 quake was near Port-au-Prince, the capital city, with more than 2 million people in the metropolitan area. Many of Port-au-Prince’s multi-story concrete buildings collapsed in a deadly heap because they were poorly constructed. There were no building codes enforced.

Where did the Haiti earthquake happen?

The epicenter of the 2010 7.0 earthquake was at Léogâne, 15 miles west of the capital, Port-Au-Prince.

The epicenter of the 2021 7.2 quake was 78 miles west of the capital of Port-au-Prince, near Petit Trou de Nippes.

What challenges does Haiti face today?

Some of the issues Haiti faced prior to the 2010 earthquake persist today, including weak political governance, lack of infrastructure, and limited access to basic resources. Haiti ranks among the world’s least developed countries because of political, social, and environmental insecurity.

Recurring disasters, such as Hurricane Matthew in 2016 and the 2021 earthquake, also make it hard for Haitian families to overcome entrenched poverty.

How does poverty affect children and families in Haiti?

Haiti is one of the poorest countries in the world — the only low-income country in the Americas. With nearly 60% of the population living below the poverty line, many children are hungry.

About two-thirds of the Haitian population depends on agriculture to make a living. Most grow smallholder crops such as corn, bananas, plantains, cowpeas, and yams. Their crops are vulnerable to environmental shocks and stresses such as drought and floods. Often their yields are limited by lack of irrigation and soil erosion, especially on deforested mountain slopes.

How can I help children in Haiti?

How did World Vision respond to the 2010 Haiti earthquake?

World Vision had worked to improve the lives of children in Haiti for 30 years before the 2010 earthquake. Within minutes of the quake, World Vision staff sprang into action and began distributing pre-positioned emergency supplies. World Vision’s staff, mostly Haitians who had suffered many losses themselves in the earthquake, stepped up to serve their own people. Their consistent efforts over the past years have saved lives, reduced suffering, and provided a future for thousands of affected Haitians.

In response to the quake, World Vision called upon the largest unified effort of its national and global support offices. The Haiti earthquake emergency response team assisted almost 2 million people during the first 90 days following the disaster. These efforts included providing basic services such as food assistance, shelter, and water, sanitation, and hygiene (WASH).

World Vision continues to work in Haiti to equip children and families to create sustainable change so they can move from subsistence to a sustainable and full life.

2015 to 2019: Prioritizing development amid setbacks

Learn more about earthquakes, which are among the most damaging and deadly disasters.

When disasters strike, World Vision is there. Help us respond wherever help is needed.