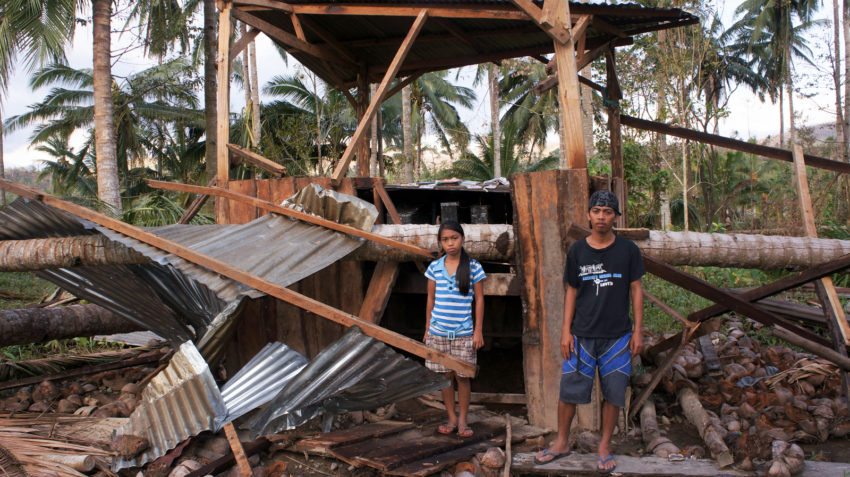 Tony Mar, 19, and his sister Genevieve, 11, stand near one of the 100 downed coconut trees that was the main source of income for their family before Typhoon Bopha destroyed their plantation in Compostela Valley. Their house was crushed by two coconut trees before they were evacuated. (©2012 World Vision/photo by Crislyn Felisilda) 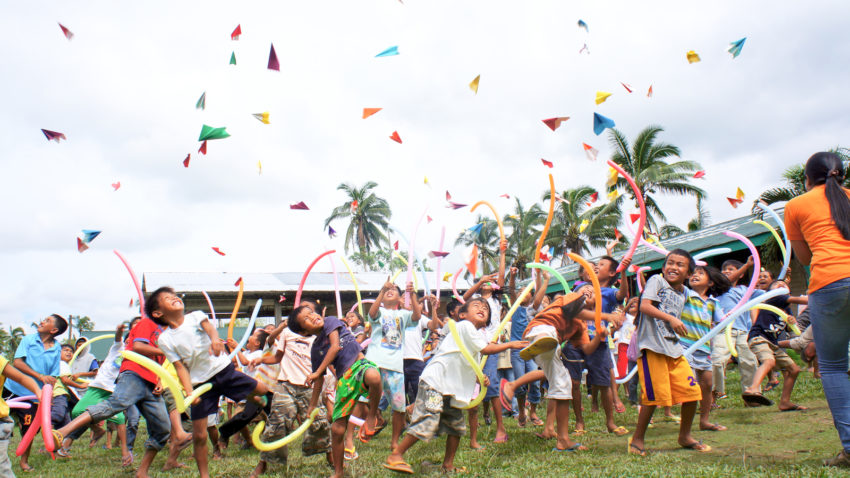 Children in the Bopha-stricken province of Compostela Valley throw paper airplanes in the air as a symbol of their hopes and dreams for the new year. More than 3,500 children attended World Vision’s Child-Friendly Spaces to play and heal. (©2013 World Vision/photo by Crislyn Felisilda) 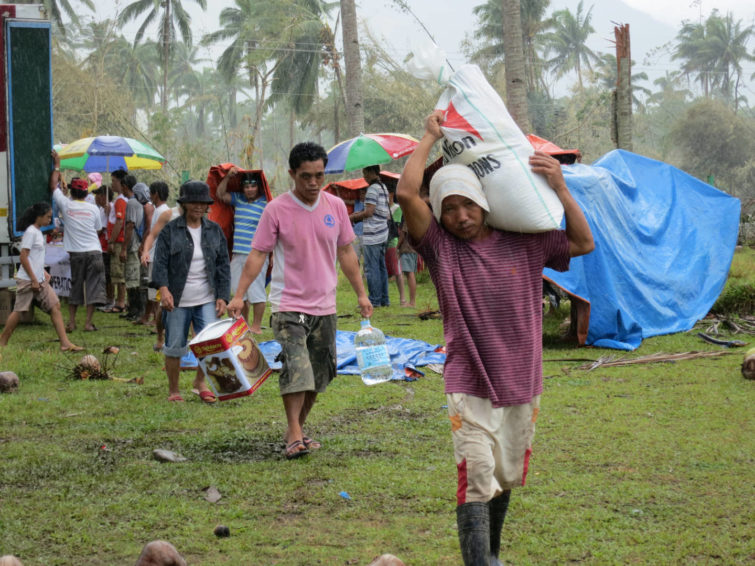 At a World Vision distribution, families receive food and household goods to replace what was destroyed by Typhoon Bopha. (©2012 World Vision/photo by Crislyn Felisilda) 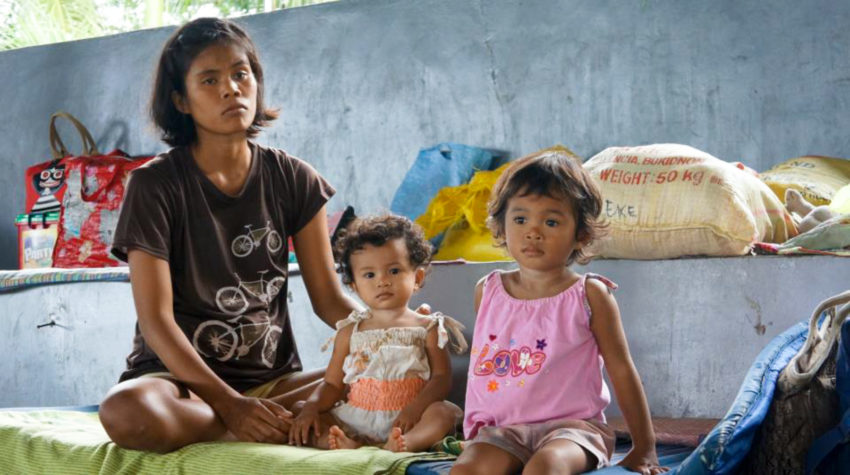 "We lost our loved ones last year (to Tropical Storm Washi). We don't want this to happen again," says 24-year old Mylene. She and her two children moved to an evacuation center before Bopha made landfall. (©2012 World Vision/photo by Crislyn Felisilda)

Typhoon Bopha made landfall the evening of Dec. 3, 2012, onBaganga, Mindanao in the Philippines. With sustained winds above 175 mph, the Category 5 storm was the strongest to ever hit the southern Philippine islands and the strongest to hit the country until the record-breaking superstorm, Typhoon Haiyan, in 2013.

Typhoon Bopha followed a similar path to that of Tropical Storm Washi, which killed more than 1,200 people and left thousands homeless only a year before. But Bopha was a much stronger storm. Though more than 170,000 people evacuated to storm shelters, the death toll from Typhoon Bopha topped 1,000 people.

Nov. 23: A weather system emerges in Micronesia, but is perceived as having little chance of developing into a significant weather system.

Nov. 30: Now a named storm, Bopha is upgraded to a severe tropical storm. Then, a few hours later it becomes a typhoon as its wind speed increases.

Dec. 2: Bopha strengthens to a super typhoon with sustained wind speeds of at least 150 mph. Later it develops a double eyewall as the whirling band of thunderstorms that surround the calmer eye increases. This is a sign that the storm is intensifying.

Dec. 4 to 6: After raking across Davao Oriental and Compostela Valley provinces, Typhoon Bopha crosses into the southern and central regions of Mindanao, downing power lines and triggering landslides.

Dec. 7 to 9: Bopha begins to strengthen again, but as it moves to the South China Sea and west of Palawan island province, it dissipates.

FAQs: What you need to know about Typhoon Bopha

Learn more about the historic force of Typhoon Bopha and how to help people in the Philippines.

What’s the difference between a typhoon and a tropical storm?

The difference between a typhoon and a tropical storm is wind speed.

When a tropical depression gets enough steam for its winds to clock between 39 and 73 mph, it’s a tropical storm. When it passes 74 mph — and it’s in the Atlantic or Northeast Pacific, it’s upgraded to a hurricane. Typhoons, like Bopha, are the same as hurricanes, but they are found in the Northwest Pacific Ocean. Find out more about hurricanes, cyclones, and typhoons.

The Japanese Meteorological Agency names new typhoons from a list of 140 names submitted by countries in the region, including China, Vietnam, Cambodia, and the Philippines. But when a typhoon approaches the Philippines, it gets a local name provided by the Philippine Atmospheric, Geophysical, and Astronomical Services Administration based on four rotating lists of 25 names. The storm that everyone else called Typhoon Bopha, they named Typhoon Pablo.

Is the Philippines a disaster-prone country?

The Philippines is one of the most disaster-prone countries in the world. Not only is it at risk for disastrous weather events, it is in a hot zone for earthquakes, volcanos, and tsunamis since it sits on the Pacific’s Ring of Fire.

Landslides, floods, and volcanic eruptions can happen to anyone, but communities with poor infrastructure and families in poverty, such as much of Mindanao, have a much more difficult time coping and recovering from emergencies compared to wealthier people and places. Because of conflict and extreme poverty, human development in several Mindanao provinces is extremely low, far below the Philippines’ average and comparable to Niger and the Central African Republic in sub-Saharan Africa. When disasters such as Typhoon Bopha strike, the extremely poor have few resources to put toward recovery.

How can I help children and families in the Philippines?

Pray for people affected by poverty and recurring disasters in the Philippines and other countries in the Asia Pacific region.

Sponsor a child in the Philippines. When you sponsor a child, you will help change a child’s life story and the life of their family and community. You’ll provide access to life-saving basics like nutritious food, healthcare, clean water, education, and more.

How did World Vision respond to Typhoon Bopha?

World Vision has worked in the Philippines since 1954, caring for children and building sustainable communities. Building resilience and preparing for disasters are two of the top aims of our long-term development programs.

Based on assessments, World Vision prioritized these relief items and activities in response to Typhoon Bopha:

Child sponsorship brings hope and help for a better life to children and families in the Philippines.