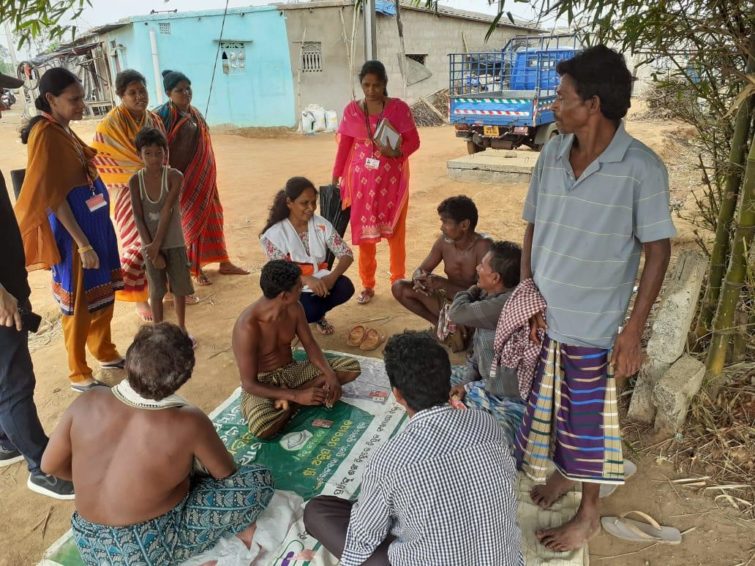 World Vision staff member Tabitha Vani explains evacuation procedures to people in Bhubaneshwar, in India's Odisha state, ahead of Cyclone Fani’s arrival. Community members moved to a safer place the same evening, a day before the storm is expected to make landfall in Odisha. (©2019 World Vision) 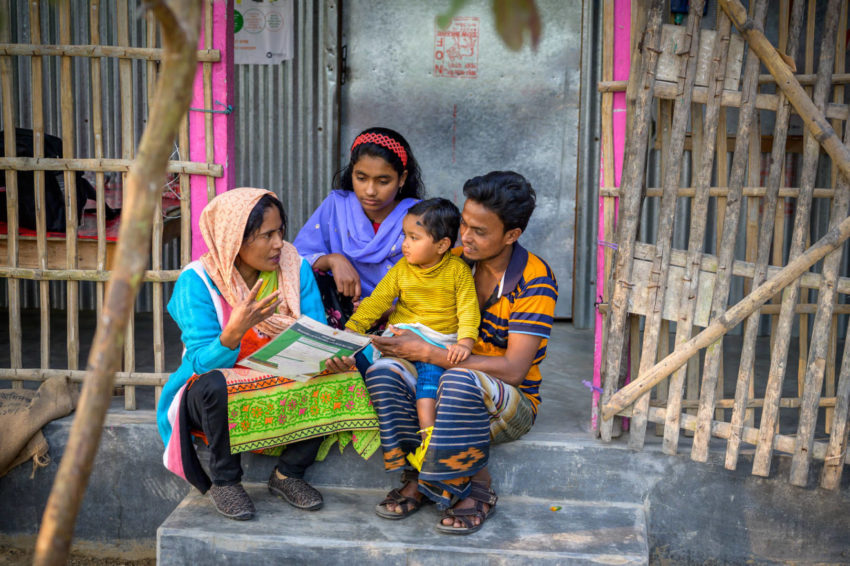 World Vision’s Rini Afroj (left) talks with members of the Rahman family about their plans in case of a cyclone or other natural disaster. Disaster risk reduction is part of World Vision’s development work in Novo Jatra, Bangladesh, where they live. The Rahmans store legal papers and special seeds in waterproof bags for safekeeping. They’ve also started saving money in case of disaster losses. (©2019 World Vision/photo by Jon Warren)

Cyclone Fani made landfall on the Bay of Bengal coast of India about 8 a.m. local time on Friday, May 3. The storm hit Puri city in Odisha state with heavy rain and wind speeds exceeding 130 mph, equivalent to a Category 4 hurricane. More than a million people in Indian were evacuated from the coastal zone.

The cyclone tracked north along the north with diminishing force before reaching Bangladesh. Rain and possible flooding are expected to continue in Bangladesh through the weekend.

Storm warnings were issued for 19 districts of India’s Odisha, West Bengal, and Andhra Pradesh states, the most likely to be in the storm’s path. In Bangladesh, the national government sounded warnings for coastal cities, including Cox’s Bazar, home to more than 900,000 Rohingya refugees.

You can deliver hope and practical help when disasters like Cyclone Fani strike.

FAQs: What you need to know about Cyclone Fani

Find answers to frequently asked questions about Cyclone Fani and learn how you can help people affected by disasters like Cyclone Fani.

Where did Cyclone Fani develop?

Cyclone Fani formed as a tropical depression in the Indian Ocean near Sumatra. The Joint Typhoon Warning Center in Hawaii first tracked the developing storm on April 26. As it drifted west, it began to strengthen. From April 30, it has been an extremely severe cyclonic storm, the first of the 2019 season.

What’s the difference between a hurricane, a typhoon, and a cyclone?

Hurricanes form in the Atlantic and Caribbean, cyclones in the Indian Ocean, and typhoons in the Asia-Pacific region. Scientifically, they are all large, spiraling storms known as tropical cyclones.

Do cyclones hit during the monsoon season?

Cyclones are most common from April to June and September to November in the Bay of Bengal and the Arabian Sea. They are more likely to occur before and after the monsoon season. Monsoon winds bring heavy rains, but not the isolated, spiraling storms — cyclones — that are generated when ocean temperatures are higher.

What is World Vision doing to help?

World Vision disaster management teams in India and Bangladesh are ready to deploy as needed. They are coordinating with government authorities and other aid agencies to organize the response.

Ahead of the storm’s landfall, staff helped communities where they work who are in the path of the storm to activate the disaster preparedness plans they’ve made together. These focus on the needs of the most vulnerable, especially children. Franklin Jones, interim head of humanitarian and emergency affairs for World Vision in India, says the grassroots teams World Vision has trained are also prepared to be first responders.

Fred Witteeven, national director for World Vision in Bangladesh, says, “World Vision has emergency supplies ready to go in the [Rohingya refugee] camps and we have had thousands of refugees working on improvements to camp roads and drains over the previous months. Nevertheless, people are living in homes made of bamboo and on steep hillsides, which puts them at even greater risk.”