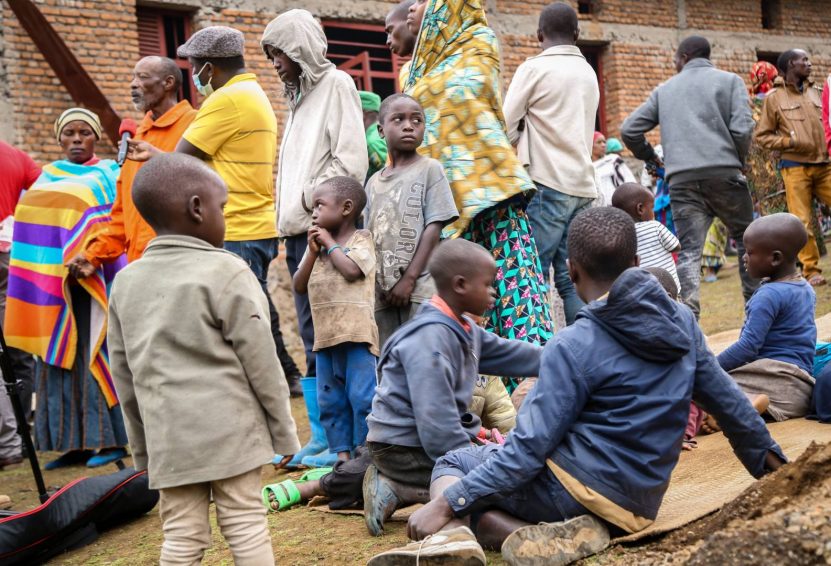 People from the Democratic Republic of the Congo who fled the volcanic eruption of Mount Nyiragongo on May 22, 2021, gather safely in the Rubavu, Rwanda. World Vision is beginning response operations in Rubavu. (©2021 World Vision/photo by Charity Beza Uwase) 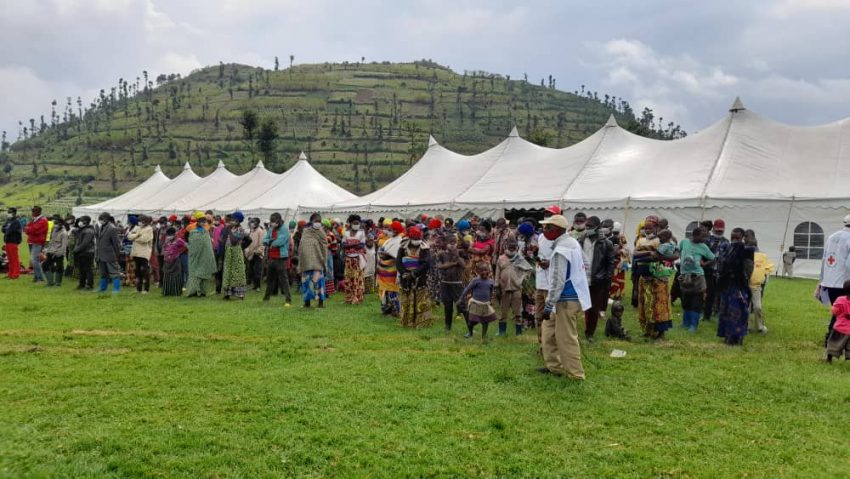 Families who fled the volcanic eruption in the Democratic Republic of the Congo have crossed safely to Rwanda, where tents for shelter and safety are pitched for affected refugees. (©2021 World Vision/photo by Maria Kaitesi)

The threat of another volcanic eruption of Mount Nyiragongo — one of the world’s most active and dangerous volcanoes — is forcing the evacuation of tens of thousands of people from the city of Goma in the Democratic Republic of the Congo (DRC).

On May 22, Mount Nyiragongo erupted, spewing torrents of lava into villages and toward Goma, a lakeside city of about 2 million people. At least 32 people have died, and hundreds more are injured or missing. The United Nations Children’s Fund (UNICEF) warns that nearly 280,000 children may face displacement due to seismic activity.

Lava stopped short of the Goma International Airport, which remains closed until further notice. Families fled in the middle of the night; others stood on roofs and watched the fiery red skies as the deadly volcano claimed crops and everything in its path in the eastern DRC. The eruption also destroyed three health centers and 12 schools. After this initial explosion, residents expressed that they may have dodged a very dangerous situation.

Followed by a series of earthquakes and tremors, some felt as far away in the Rwandan capital city of Kigali, authorities issued an evacuation order on May 27, warning that risks of an eruption or further damages were possible.

“There’s been fracturing of the earth and flowing lava,” says Geoffrey Denye, emergency communications specialist for World Vision. “Homes have been destroyed. Farms replaced with volcanic lava and we see lots of land, where there had been crops of beans and maize now covered in lava. We’ve had frequent tremors ever since and these tremors have been a cause of great anxiety because we do not know what they mean. Will the ground open up and spew lava?”

Cracks have appeared in the ground across the city, with some reports of visible magma through the cracks, says David Munkley, World Vision eastern DRC zone director. “There are concerns that magma is moving under the city towards Lake Kivu, a lake which has large stores of carbon dioxide and methane gas. If the magma were to reach the lake, it could cause a large explosion and release deadly gases.”

“It’s a chaotic scene,” David says. “The fear is that tremors could lead to a fresh eruption of the volcano … or even set off a chain reaction leading to the release of large amounts of poisonous methane gas from the lake alongside the city. If that happens the gas could prove deadly. People have been fleeing in all four directions, including into Rwanda, if they are able.”

How is World Vision helping people affected by the volcano eruption in the Democratic Republic of the Congo?

World Vision is working with partners to address the emergency needs of affected children and their families both in the DRC and Rwanda.

We’re finalizing discussions with the World Food Programme (WFP) to distribute food to displaced families in the DRC. World Vision is the largest implementing partner of the WFP.

In Rwanda, World Vision will begin response operations in Rubavu, where thousands have gathered. Teams in Rwanda are already in Rubavu conducting assessments and coordinating new arrivals.

“The humanitarian need is still unfolding,” David says. “When you have such a large number of people moving so quickly you can find yourself in a water and health crisis and find people who will be without food for a day or two.”

World Vision will help meet the most urgent needs of the displaced. We’ll also be working closely with other agencies to ensure effective coordination of aid.

How are children affected by the latest volcanic eruption?

World Vision is very concerned about the most vulnerable, especially children who are separated from their parents.

Children in the Democratic Republic of the Congo affected by the volcano eruption are facing risks related to protection, nutrition, and health, including water-related diseases and the spread of cholera.

UNICEF reports that nearly 1,000 children who were separated from their parents during evacuations have been identified, with UNICEF helping reunite nearly 700 children with their families so far. UNICEF also warns of an increasing displacement of nearly 280,000 children due to the continuing evacuations.

“We know this is going to be an extremely challenging few days and hope that the volcano does not erupt again, causing lava flows to pour through the city as they did in 2002,” says David. “The potential destructive power of this volcano makes it one of the most dangerous in the world.”

Are any sponsored children affected?

World Vision does not have sponsorship operations in affected areas in the DRC. And there are currently no World Vision sponsored children from Rwanda who have been affected as the majority of the evacuees are fleeing to Rwanda.

How can I help people affected by disasters like volcano eruptions?